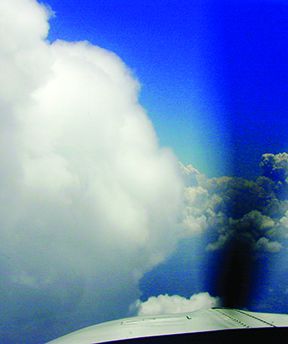 The flight data recorder retrieved from the crashed twin-engine, modern turboprop revealed that while flying in an area of thunderstorm-generated, airframe-shattering turbulence, its airspeed was 60 knots greater than the published turbulence penetration speed, or the speed for maximum gust intensity (VB). An inflight break-up occurred; structural pieces of the airframe were strewn over miles of countryside. Abnormally increased structural loads imposed on the airframe were suspected as a contributing factor in the accident.

Sadly, this is an all-too-familiar accident narrative. In the author’s experience as an instructor involved in many flight reviews and instrument proficiency checks, a large number of pilots do not seem to understand the velocity-load (V-G) diagram and its relationship to the life-saving VB speed. They don’t grasp it is critically important to fly at VB and apply the concepts of the V-G diagram when flying in gusty, turbulent conditions. To help readers better understand these concepts, let’s discuss some of the factors responsible for imposing loads on aircraft, V-G diagram, VB, maneuvering speed (VA), and how to mitigate airframe loads so that structural load limit ranges are not exceeded when flying in turbulent, gusty conditions.

Load Factor
In a constant-altitude turn, as bank angle increases, centrifugal force (force acting outwardly on any body moving in a curved flight path) increases, causing the airplane load factor to increase. For example, positive load factors for 45-, 60- and 75-degree bank angles are 1.41 G, 2 G, and 4 G, respectively. Of course, aviation training textbooks are replete with graphs depicting relationships of bank angle to load factor and percent increase in stall speed in the clean configuration (VS). In fact, by using a calculator and applying some simple mathematical concepts, increases in load factor and VS for any bank angle easily can be determined. The math is summarized in the following two equations:

The effects of a curved flight path—such as occurs in pitching up and down, especially at higher airspeeds, with rapid forceful control movements—are flight maneuvers that significantly affect load factor. The effects of these flight maneuvers on wing loading are not sufficiently emphasized in many books used for primary flight training.

While an airplane is in a curved flightpath, it has a tendency to attempt, as a result of inertia, to follow a straight flightpath. This tendency generates a centrifugal force, which acts outside of the curved flightpath. As a result, a positive load occurs when the pitch control is pulled back (nose-up pitch), causing centrifugal force to act in the same direction as the force of weight. This is depicted in Example 1 of the graphic on the opposite page.

A strong upward gust associated with a thunderstorm or frontal weather condition (e.g., upward speeds 50 to 75 feet/sec) and striking the aircraft’s wings from below causes the relative wind to change to an upward direction as it meets the wings. This increases angle of attack, lift and load on the wings, having the same effect as applying a sudden, sharp nose-up motion on the pitch control.

Meanwhile, a negative load occurs when the pitch control is used to push down the nose, causing centrifugal force to act in a direction opposite to that of the force of weight. As with the updraft described, a strong downward wind gust causes the relative wind to change to a downward direction as it meets the wings, acutely decreasing angle of attack and load on the wings, and has the same effect as suddenly pushing the stick forward. This is depicted in Example 2, at right.

With either a sudden forward push on the stick or a strong downward wind gust, the pilot experiences the sensation as if his/her body weight is decreased. This is caused by inertia attempting to keep the pilot’s body moving forward while the airplane is diving away from the original flightpath. The pilot would feel a weightless sensation when the effects of inertia and centripetal force—a center-seeking force directed inward toward the center of rotation—cancel each other out.

This is the operating principle behind NASA’s reduced gravity environment flights conducted with a specially modified KC-135 jet transport. The airplane is flown upward (45-degree nose-up pitch attitude) and then downward in a parabolic arc flight trajectory. At the top of the arc, a weightless period of 20 to 25 seconds is produced when inertia and centripetal force cancel each other out.

V-G diagram
The V-G diagram, which plots an airplane’s velocity against the G-loading it can withstand, is a graphic representation of the operating limits of a particular aircraft under defined conditions of loads, airspeeds and configurations. It describes the parameters of an airplane’s flight or operating envelope. At first glance, it appears to be a complex, esoteric and mathematical-looking graph—an engineer’s or geek’s dream. But its lessons are both accessible and easily understood: Pilots should not be intimidated by its presentation, nor dissuaded from learning its important concepts. It describes real-life practical issues, applicable to flight safety.

For safe flight, the airplane must be operated within the defined operating envelope of the V-G diagram. Load factor is plotted on the vertical axis while airspeed is plotted on the horizontal axis. The normal operating envelope is bounded on the load factor axis by the airplane’s positive and negative G-load limits and on the airspeed axis by VS and the maximal structural cruising speed (VNO). These speeds are indicated as the bottom and top of the green arc, respectively, on a “round dial” airspeed indicator.

The positive and negative G-load limit lines for a normal category training aircraft like a Cessna 172, for example, are positive 3.8 G to negative 1.52 G, respectively. It would be incorrect to infer the airplane can accept twice as much of a positive than a negative change in load. Normally, while in level flight the airplane is at 1 G. If the airplane is accelerated to a positive 3.8 G from an upward wind gust for example (as described in the graphics on page 17), then the change is from 1 G to 3.8 G, a 2.8 G change. Similarly, if the airplane experiences a negative load from a downward wind gust to minus 1.52 G, then the change is from 1 G to minus 1.52 G, a 2.52 G change.

Also defining the boundary of the envelope are ascending and descending curvilinear lines on the left side. These lines indicate the maximal amount of lift an aircraft can generate at a specific speed. The intersection of these lines, with a vertical line drawn from a specific speed on the airspeed axis within the operating envelope, indicates the maximum G-load capability at that speed. To the left of these curvilinear lines are the airplane’s “stall regions.” Within these portions of the flight envelope, at any combination of load factor and airspeed, the airplane is stalled.

Stalls imposing more than 1 G of loading on the airplane are termed “accelerated stalls” and occur at speeds greater than VS because of the increased loads. They usually are more violent than unaccelerated stalls. They are unexpected because of the relatively higher airspeed. The V-G diagram also teaches that an airplane can be protected from excessive positive and negative G, as from strong upward and downward wind gusts, respectively, striking the wings, presuming the airplane is flying at the appropriate speed, i.e., an accelerated stall occurs before excessive G can be generated and structural damage occurs.

VA and VB
What we commonly think of as the airplane’s turbulence penetration speed, VA, or design maneuvering speed, is 1.95 VS and is the airspeed at which full, abrupt control movement by the pilot can be used without generating excessive G-loads and overstressing the airframe, or the speed at which a full and abrupt control movement will result in the design load limit. The VA speed applies when the control surfaces are rapidly deflected to their limits. When flying at VA while performing flight maneuvers—Chandelles and Lazy 8s, for example—an accelerated stall occurs before the limit load factor is reached. When flying at speeds greater than VA, the load limit can be exceeded before a stall occurs, risking structural damage and failure.

A reason not to use VA when flying in turbulence involves the effect gusts have on airspeed. Gusts and turbulence cause airspeed fluctuations. Headwind gusts striking the airplane or headwind shear is a performance-increasing condition, having the effect of increasing airspeed. If a pilot attempts to maintain VA in gusty turbulence, the airplane will exceed this airspeed. Increases in airspeed are wind gust-dependent. For example, in moderate turbulence, airspeed fluctuations from to 15 to 25 KIAS can occur (Barry Schiff, Proficient Pilot, Vol. 2, 2001). This means airspeed may easily increase to greater than VA.

Suppose for a particular airplane at gross weight, VA is 117 knots, as the V-G diagram depicts, and suddenly, an upward wind gust causes airspeed to increase by 15 knots to 132 knots, a value well in excess of VA. Consequently, loads greater than 3.8 G are likely to be generated, predisposing to structural damage and failure. Airspeed has a direct effect on load factor, i.e., the amount of load imposed on the wings depends on how fast the airplane is flying, as demonstrated by the V-G diagram. Clearly, pilots should be flying slower than published VA. Aviation authorities recommend flying 10 to 15 knots slower than VA when in turbulent gusty conditions, therefore, fly the airplane at VB.

In addition to slowing to VB as soon as possible when encountering gusty conditions, consider disengaging the autopilot, manually maintain wings level, do not use sudden or large control inputs, and smoothly control attitude. Use attitude indicator to maintain attitude and allow altitude to vary.

Which Speed?
The design speed for maximum gust intensity, VB, needs to be emphasized and thoroughly understood to safely fly in turbulent gusty conditions, but neither VB nor VA are marked on the airspeed indicator. Both VA and VB vary directly with the airplane’s gross weight; the lower the weight, the slower are VA and VB, and vice versa. That’s because lighter airplanes, compared to heavier ones, are easier to accelerate because they have less mass. A consequence of a lightly loaded airplane is that it is more prone to rapid changes in wing loading than heavier airplanes.

The design maneuvering speed VA can be found in the pilot’s operating handbook (POH)/airplane flight manual (AFM) for each airplane and/or on a placard within the cockpit. However, the published VA applies to the airplane at its maximum weight. During preflight planning, just as weight and balance data are determined, VA based on the airplane’s actual flying weight can easily be determined by multiplying the published VA by the following equation.

Safe flight operations demand an understanding of the various flight conditions that affect wing loading. Knowledge of structural load limit ranges, V speeds as stated in the airplane’s POH, VB, as well as an applied understanding of the vitally important concepts of the V-G diagram promote this awareness.