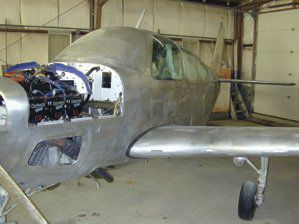 Regarding “The Real Risks Of Engine Failures” in the November issue, the sidebar on page 5 states, “Only nine (11 percent) of the powerplant failures during 2015 were fatal, meaning we basically have a one-in-ten chance to survive an accident resulting from an engine failure.”

Shouldn’t that read “…we have a nine-in-ten chance…”?

It absolutely should. We’re not sure how that error crept in, but a bunch of people missed it. Thanks to all who pointed it out.

I had an interesting experience following recent painting of my Cessna 182. I flew it back from the paint shop uneventfully enough, but after tying it down following that two-hour flight home, we had a windstorm with 50-knot gusts, and the wind put enough force on the right wingtip to cause the screws holding it in place to drop out. So, the wingtip peeled off, and smashed into the cowling, creating a dent/crease just forward of the windshield.

Upon a belated inspection of all the screws, my mechanic and I discovered several on the ground below the right wingtip, and many loose screws, most on the right side of the plane. The wingtip had come to rest about 200 yards away, causing no further damage.

Apparently, one of the paint shop technicians responsible went to lunch after tightening those on the left side and never finished tightening the right-side screws!

I should have done a better job pre-flighting, but at least the screws stayed in during the flight home. Better lucky than smart, I guess.

Thanks for the article!

How about an article on constant-speed propellers? Why is it necessary to maintain constant speed? How does engine torque and horsepower relate to prop speed? How does an improperly pitched prop “lug” the engine? How do you get a prop to turn again once it has been feathered if the starting motor has failed? Why scimitar props? How does the number of blades alter performance?

Third, years ago I rented a vacation house adjacent to the runway on North Captiva Island, Fla. I watched one day as a Bonanza took off and entered an overcast. The next morning on the early news, that Bonanza was pictured as missing. It was later found in about six feet of water in the adjacent sound, a fatal accident. How does spatial disorientation take hold and what can be done to prevent it?

Thanks for the story ideas. We last tackled propellers a few years ago, so we’ll slot something for the near future. For now, using a constant-speed prop allows the engine to develop its full rated rpm instead of being loaded up by a fixed-pitch prop and accepting the power loss. (Hint: Engines turning a fixed-pitch prop only develop their full power at maximum rpm, which is problematic at low airspeeds.)An aircraft’s center of gravity datum is placed wherever the manufacturer wants it. One reason to locate it far out in front of the aircraft—instead of, say, at the firewall or the pilot’s seat—is to help eliminate the potential confusion of working with negative numbers and ensure consistent weight-and-balance computations throughout the aircraft’s service.Finally, we took a deep dive into the ways we can maintain orientation in last month’s issue.

I read with interest Tom Turner’s article on attitude indicator failures, “No Checklist For This,” in January’s issue. No one will argue that without an AI, inferring pitch and roll information from the other four remaining instruments of a six-pack is a test of skill and mental fortitude—assuming both the AI and heading indicator are lost due to vacuum failure.

I recommend that owners of any six-pack-equipped airplanes that fly in “serious” IFR to replace the turn coordinator with a second, electric AI, hopefully also with its own power supply in case of an electrical failure. The FAA’s advisory circular AC 91-75 explains in detail the procedures.

Of course, if the airplane has a rate-based autopilot, the turn coordinator needs to be retained, potentially creating a space issue on the panel. As an alternative, smaller two-inch instruments are available, some of which are all-electronic designs that could fit in the panel near the pilot’s line of sight.

At the other extreme of the cost spectrum would be an indicator such as L3’s ESI-500, which I have installed in my Mooney as a backup to a Garmin G500Txi. It incorporates all the information of a six-pack, and I have it configured to act also as a GPS/NAV/ILS head. Now partial panel for me is full panel, but in a smaller package.

In glass panels, they all have standby AIs. But in some airplanes equipped from the factory with goodies like Garmin’s G1000 integrated flight deck, the layout forces the backup instruments way to the right of the panel, requiring twisting one’s head by 70 degrees. Great way to induce vertigo.

My suggestion, if the right-seat person is also a competent pilot, let him/her fly from the right. If flying solo, scoot over to the right seat. Of course, this would assume also that the pilot can land from the right seat, sometimes a tall order for non-CFIs.

Thanks, Luca. Backing up vacuum-driven steam gauges continues to be a problematic choice for those of us flying older airplanes. In my instance, I fly with a so-called “wet” vacuum pump, one lubricated by engine oil, instead of the failure-prone “dry” pumps incorporating graphite vanes. Other parts of the system—hoses, regulator, etc.—may fail, but it’s a good bet the pump will continue turning.That said, I also have an older, all-electric, three-inch mechanical artificial horizon mounted in the panel to the left of the six-pack. To me, this was the best equipment choice available at the time it was installed, and it still provides good service. Of course, technology has provided many more options, including portable device apps like the one pictured at left.Whatever decisions one makes on how to equip an aircraft to ensure some flight-instrument redundancy, the solutions need to be up and running at all times, ready to go at a moment’s notice, and include a way to mask the failed instrument. That includes mounting, power, initialization and any other care and feeding a backup device might require. As one who recently suffered the failure of my directional gyro and watched it spin wildly as it wound down, I wouldn’t want to be distracted by those actions while, say, shooting an ILS to minimums.