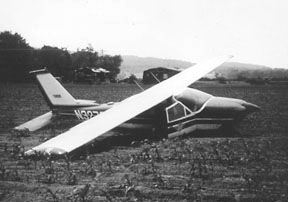 I was driving down a country road when I had to blink to make certain I wasnt hallucinating. There was a Cessna 152 by the side of the road. It was undamaged, which was surprising because the road had a number of power lines running along it.

I stopped to see if the person standing next to the aircraft was okay. He said the flight instructor had pulled the mixture to simulate an engine failure when they were doing S turns along a road. The student had few options for an emergency landing area and chose the road. There was no time to try re-starting the engine.

The student said the flight instructor had walked down the road to try to find a better stretch of the road for a takeoff. He returned before a sheriffs deputy discovered their presence, and the two chose to taxi to a better section of the road. At several locations the wingtips barely cleared the utility poles and fences. They took off without further incident, so officially this was a safe flight.

He pulled the mixture control to idle cutoff when the aircraft was over the airport at 11,500 feet. The propeller stopped rotating. The pilot glided down in an orbit over the airport to 5,000 feet before trying to restart the engine.

All subsequent restart efforts during the descent were unsuccessful and he decided to land on runway 32 because the winds were from 330 degrees when he departed.

On final approach, the pilot saw he was high and fast, then noticed that the windsock indicated a tailwind. He attempted to use flaps and a prolonged slip, however the aircraft floated down the entire length of the 3,550-foot runway. It finally touched down on the nose gear 280 feet beyond the runways departure end.

I wondered if this technique was becoming more common in flight training so I called the chief pilot of a local flight training program. But before I could raise the topic, he said, I just had to fire the assistant chief pilot. He pulled the mixture on one of the Archers trying to teach simulated engine failures. Where do these people get their ideas?

Real or Fake?
It should go without saying that causing a real emergency while trying to simulate an emergency is rather poor judgment. Simulators are the best place to practice emergencies and the bulk of transport category simulator training focuses on dealing with emergencies and system failures.

However, full-motion simulators for light planes are not available, and flight training devices just dont have the same impact. That means simulated engine failures are a common maneuver practiced on many training flights. These should be practiced under safe conditions and in a safe manner.

In a single-engine aircraft, engine failures are properly simulated with the throttle, not the mixture control nor the fuel shutoff valve. The problem with using the mixture control or the shutoff valve is that it completely shuts down the engine, rendering the engine useless if you need power. In addition, some airplanes – particularly those with fuel-injected engines – may vapor lock or otherwise be difficult to restart.

Using the throttle keeps the engine at idle and able to respond. As you should know, its important to clear the engine occasionally during the descent. This will help keep the plugs from fouling and provide reassurance that the engine will come back to life when you need it.

Pilots taking multi-engine training may have experienced the instructor using the mixture controls to simulate engine failure. But such simulations should have occurred only according to manufacturer recommendations – generally only above 3,000 feet agl.

A mixture reduction decelerates the engine better, leaving air in the cylinders. Rapid engine movement detunes the counterweights on the crankshaft and weakens the metal. These are important reasons to slowly retard the throttle at all times, but especially when simulating engine failures.

For engine cuts in the pattern, the throttle (and only the throttle) should be used to simulate the failure. Several manufacturers recommend against simulating an engine failure below 500 feet agl at all.

There are several other conditions that should be followed when practicing engine failures. Simulated engine failures in both singles and multi-engine aircraft need to be practiced over safe terrain, at a safe enough altitude and near an airport. Over an urban area or crowded suburb is obviously a bad place to simulate an engine failure, as is the middle of a swamp. But a check of the NTSB database shows many instructors dont use such a common-sense approach.

Perhaps most importantly, simulated engine failures should be performed only when the aircraft is within acceptable parameters.

The pilot cant keep the rotors turning at sufficient speed to provide a temporary amount of lift as the pilot pulls up on the collective to flare the helicopter. Unfortunately many aspects of commercial helicopter flying require the pilot to fly within the height-velocity curve, particularly when doing external load work with long lines during logging, construction, transmission line maintenance or aerial firefighting.

In multi-engine airplanes, flight instructors should never simulate an engine failure unless the aircraft is faster than Vsse, the safe single engine airspeed. Usually Vsse is the highest of three airspeeds: the published Vmc plus five knots, the power-off stall speed plus 5 percent, or the zero-thrust stall speed plus 10 percent.

In addition, instructors should be very careful when simulating engine failures during the takeoff roll. Larger aircraft have a Vmc(g), the minimum control airspeed during ground operations, which is published in the POH.

If an engine failure is simulated below this speed, the rudder does not have enough control authority to counter yaw and the pilot flying must quickly retard the throttle on the operating engine or the aircraft will depart the runway. It is recommended that simulated engine failures on the ground be accomplished at less than 50 percent of Vmc, with the immediate reaction to abort the takeoff.

During all of this simulated engine failure training, its important to treat the engines kindly. Practicing engine failures is hard on engines and you may soon find yourself dealing with a real engine emergency if you dont treat the engines well during multi-engine training. Avco recommends not shutting down an engine more than twice in a lesson, and avoiding practice feathering during cold weather.

Beyond Powerplant Failures
There are other practice situations during simulated emergency practice that beg for re-examination. There are some flight instructors teaching students to roll aircraft in case of an inadvertent encounter with a wake vortex. Its an interesting selling point, but there are some facts that fly in the face of these sales programs.

In every case, the induced roll rates were so fast that the aircraft was rolled into the ground before the pilot could think about reacting. Aircraft controls on the average general aviation aircraft at normal approach speeds are relatively powerless against a powerful vortex that can overwhelm the airplane so quickly. Besides, how many pilots have the skill to successfully roll an aircraft at 100 feet agl?

Simply stated, the aircraft doesnt have the capability to do an escape/recovery maneuver, the altitude will almost certainly be insufficient, the wake vortex is likely to be strong enough that the airplane is just along for the ride, and even the best pilots arent able to counter this. Avoidance is paramount.

Unfortunately, some flight instructors are doing what amounts to aerobatic instruction in aircraft that werent certified for aerobatics. As a result, there are some bent aircraft out there in the rental market with airframes distorted by maneuvers they werent designed to withstand.

There are other situations where flight instructors are teaching maneuvers not authorized for the aircraft.

One organization that used a twin turboprop for dropping parachutists used general aviation instructors teaching on an airplane that had come from the military. The GA instructors had limited experience in transport aircraft.

One instructor was doing a recurrent training checkride and asked the pilot flying to perform a power-on full stall, not realizing that you dont stall transport aircraft. On this occasion, the pilot flying applied power and brought back the yoke to create a power-on stall.

The aircraft proceeded to tail slide and then flip over on its back. They recovered while going through the red line and were lucky to have done so.

The same organization was acquiring another twin turboprop from the military in the early 1990s and the military test pilot instructor wanted to demonstrate the slow flight and stalling characteristics of the aircraft. They recorded the session with a video camera mounted to view the attitude indicator.

The video shows the stick shaker, then the stick pusher, but the military instructor told the pilot flying to keep pulling back on the yoke to keep it in the stall. Very quickly the transport aircraft departed controlled flight, with abrupt rolls beyond 90 degrees left and right and pitch excursions that mimicked something a cowboy goes through on a bull at a rodeo.

Control of the aircraft was regained at approximately 600 feet agl. At the end of the tape, the instructor pilot was discussing trying the maneuver again while a flight engineer is screaming into the intercom, Let me off!

The lesson from these last two examples is that even though you might have performed a rather common maneuver in several aircraft in your past training, that doesnt mean that every aircraft is designed and certified for those same maneuvers. Such information can be found in the aircraft manuals.

Its safest to use simulators for emergency procedure training, but when a simulator isnt available, strict adherence to the right procedures, in an aircraft properly certified for those maneuvers, within proper parameters and in a safe environment are vital for emergency training.

After all, youre there to learn how to deal with emergencies, not how to create them.

Pat Veillette is an aviation researcher flying a glass cockpit and working in the training department of an air carrier.