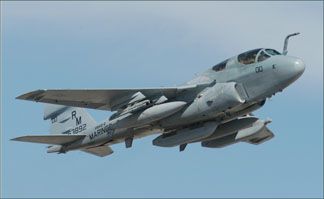 When someone I know very well was a student pilot, not so many years ago, he experienced one rather disappointingly short flight with his instructor in a Cessna 152. Convective weather was brewing, and it became obvious their cross-country would have to wait yet another day.

Perhaps because he perceived his students frustration, the instructor took the controls for a moment. Never having experienced aerobatic flight, all the student remembered were strange sensations and new perspectives for a few short moments, followed by the sudden realization that they were now headed back home.

When he asked, What was that?! his instructor paused a moment, and said, somewhat smugly, that it was a combination of a hammerhead stall and a wingover. Nothing bad happened, but even this green student knew that he had witnessed a moment of indiscretion.

A similar moment involving the crew of a U.S. Marine Corps EA-6B Prowler created an international incident in 1998. The Prowler slashed through a ski lift cable in central Italy while flying faster and more than five times lower than the allowed minimum altitude. A military court-martial acquitted he pilot and navigator on charges of negligent homicide and involuntary manslaughter, but the two were later found guilty of charges related to destroying a videotape.

Both of these events are examples of an ongoing problem those of us who fly must recognize. Im not thinking about situational awareness here. And Im not considering lapses of judgment, sudden or otherwise. Instead, I attribute these occurrences to rogue behavior.

Most of us, pilots especially, are good, law-abiding citizens. But were not all that far removed from our brachiating forebears, and the lessons in every clichd parable of good and evil, and the many Never Again and There I Was stories prove there is a scoundrel in each of us. They also prove that any one of us can fall from grace. The Prowler pilot was engaged in something called low-level maneuvering, which well look at in a bit. First though, I want to discuss some of the psychology behind it, or any other ill-advised action.

Once Upon A Time…
The courage and audacity of many pilots during the first decades of powered flight, while developing airplanes as instruments of war, when pioneering early airmail routes and the derring-do of daredevil barnstormers attest to the fact that rogues once had a place in aviation-but not any more. This image, fostered by our media-driven western culture, is hard to leave behind, however. In addition, we are blessed to live in a free land, and most who have wheeled and soared and swung can probably understand how easy it is to, well, get a little carried away once in a while.

Aside from being human, were also for the most part a self-selected group of very capable and ambitious folks and, since fortune often favors the audacious, we, more than most, are more likely to be pushing ourselves, sometimes a bit too much. Whether we acknowledge it or not, were always flying within a box of compliance, and we must always watch out for the other guy. Sometimes, the other guy might be us.

This phenomenon isnt limited to aviation, either. I myself have known a rogue, during my early years in the telecommunications industry. The former head of flight dynamics at a major aerospace firm in southern California, he was responsible for having put dozens of multi-million dollar communications satellites in their proper orbits. A dashing and brilliant maverick, he drove a Maserati, and had a reputation for shooting from the hip, at least when it came to orbital dynamics. Another rogue, in 1995, single-handedly brought down what at the time was the oldest merchant banking company in England.Sure, no lives were lost. But, in aviation, innocent and not-so-innocent people can die as a result of rogue behavior.

Low-Level Maneuvering
Now to talk a bit about low-level maneuvering. According to the AOPA Air Safety Foundations (ASF) latest interpretation of general aviation accidents, otherwise known as the Nall Report, pilots who engage in low-level maneuvers (and flight into worsening weather) are still getting themselves killed with remarkable regularity.

For simpler aircraft like a single-engine, fixed-gear trainer, maneuvering flight accounts for almost twice the percentage of fatal accidents as weather encounters. When you consider single-engine retractable gear airplanes though, flown typically by more experienced pilots, often flying IFR, that ratio reverses, and weather is the more fearsome adversary. Still, for the pilot population as a whole, maneuvering flight (mostly buzzing and similar stunts) still accounts for about a quarter of all fatalities. Data found in the ASFs 2004 Nall Report is summarized in the “Maneuvering Flight” sidebar.

As the report implies, when any low-level maneuvering flight comes to a bad end, using the word accident is really only a charitable euphemism.That sort of thing usually confers a violation of 14 CFR Part 91.13 regarding careless or reckless operation and/or Part 91.119(a) concerning minimum safe altitude and undue hazards to persons or property on the surface.

For new pilots just tasting the freedom of flight, typically in a single-engine, fixed-gear trainer, that freedom often proves intoxicating. We all have a desire that leads us to try showing off. As discussed above, as pilots, were almost self-selected for it.

As Professor Paul Craig points out in his book, The Killing Zone, the typical pilot personality feels a need for independence, excitement, prestige and control. If this isnt a potential recipe for exhibitionism, thrill-seeking and acts of indiscretion, I dont know what is. The harder part is how to keep the malicious Mr. Hyde at bay while we take some of the rough edges off Dr. Jekylls ego and soak up enough wisdom to keep him out of trouble. And as Tony Kern discusses in his book, Darker Shades of Blue, just one momentary lapse of judgment is all it takes for a potential one act rogue to cross over to the dark side.

Some maneuvering flight accidents are mission-related, such as aerial application, but most of the time, it happens on a personal flight, where there isnt really any critical agenda. As Barry Schiff mentions in his third Proficient Pilot book, you just wont see a wire until youre 150 feet from it and, by that point, even two seconds isnt enough time to react and avoid it.

Breaking down the statistics, more than a third of these low-level accidents involved loss of control, a small number (about two percent) involved a power loss and about one in nine were outright low-level aerobatics. In any given maneuvering flight accident, about half involve fatalities. In most serious accidents, judgment is usually involved, whereas its more a matter of skill in less serious fender bender accidents.

Experience Vs. Complacency
As aviators, we start out knowing enough to be dangerous. While inexperience is the bane of the novice pilot, complacency becomes an equally serious issue for the more experienced. And during these times, when the spotlight is turned on all of aviation, it would be a real good idea if we eased up on the stupid pilot tricks.

First, another commercial for straightening up and flying right: We should all learn to fly professionally. Part of that means playing by the rules. Aerobatics can be an absolute hoot, and will definitely improve your airmanship. But seek proper aerobatic instruction, find an airplane you can legally use upside down, understand aerodynamic forces and gain the proper appreciation for what you would be asking that airplane to do.

Then, obey the rules in FAR 91.303 regarding aerobatic flight. That regulation prohibits aerobatic flight over any congested area,over an open air assembly of people, within the Class B, Class C, Class Dfs or Class E airspace designated for an airport; within four nautical miles of an airway, below 1500 feet agl or when flight visibility is less than three statute miles.

Some of the reasons for these prohibitions are obvious. If you have to punch out, better to have the afflicted airplane bore a hole in a soybean field than the bleachers in center field at a ballpark or someones house, not to mention reducing the likelihood of a midair. By the way, 1500 feet doesnt give your chute (and therefore you) a heck of a lot of air time. And you did remember that a parachute is required when conducting aerobatics, right?

Three miles visibility isnt going to be much help to anyone either, since, when you fly aerobatics, looking where you are going is not often the most effective way of doing things.

Several aspects of our normal training experience actually help stack the deck against us and contribute to low-level maneuvering accidents. For one, we generally are taught to practice stalls nose-high and at slow airspeeds.However, an accelerated stall often happens when were faster, and descending (e.g., the well-known cross-controlled base-to-final turn). Recoveries are taught fairly casually, with little effort to mimic the frantic urgency that would likely accompany the real event. And equally bad, we practice them often enough that something called fear extinction displaces our healthy dread of falling.

Last and definitely not least, flying low at high speed is not something with which most of us are at all familiar. As objects pass behind our wings at radically increased and unfamiliar rates, the accompanying adrenaline rush generally serves to amplify our control inputs and erode finesse.Unfortunately, that also comes with a decrease in attention paid to coordinated flight, airspeed control, energy management, and the critical lift that we lose as our bank angle and load factor increase.

How does temptation foster a bad decision? When does innovation or heroism become recklessness, or even villainy? When does profit and personal gain eclipse safety? When does expanding the envelope become an ego writing a check that ones experience cant cash? The answer isnt blowing in the wind.Its not just your life youre messing with, either; often times there are lives on the ground, too. And the stereotype your actions contribute to may well lead to more regulations for the rest of us.

Finally…
There are ways to have fun without breaking the law, but take extra care-over four years after the terrorist attacks of September 11, 2001, there are significantly fewer die-hard general aviation fans among the ground-bound.For many, all aircraft are suspicious and frightening. Acknowledge that perception and understand that another persons peace of mind is no less important than your fun.