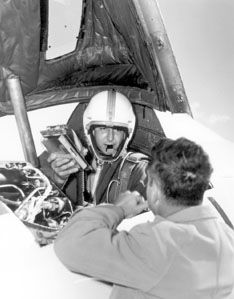 Its one thing to bore through a little weather in your Skylane; its quite another to be the first to strap on a rocket-powered research plane, launch from a B-52 and fly to the lower reaches of space. The risks involved are not even in the same universe, yet these ﬂights were and are regularly accomplished without incident. How do these guys do it? In this first installment of a continuing series of articles, well try to answer that question.

Today, Scott Crossfield drives a red Ford pickup truck and flies a well-maintained Cessna 210 roughly as old as the average privately owned airplane in the U.S. He flies it about 200 hours a year from his clean, nicely equipped hangar and clearly enjoys spending his well-earned retirement talking about flying while watching the ebb and flow of general aviation on a warm June morning. Sitting in a directors chair in his hangar, its almost easy to forget he was the first man to fly at Mach 2 and the first to fly at Mach 3-and live to tell about it. Almost.

There was a time when his flying involved much more expensive and dangerous aircraft and was a bit more stressful than it is today. At a sprightly 83, he can discuss the decisions made when overhauling his IO-470 with the same ease and expertise as he can the technical aspects of flying the X-15. He also has some well-defined ideas and opinions on aviation safety.

Nothing Happens Instantly
While flying rocket-powered research aircraft is about as far as one can get from the average GA pilots normal operations, Crossfield brings with him several lessons from that portion of his career. One of them is that nothing ever happens instantly.

By way of explanation, accident-prevention specialists promote the idea that there is a chain of events leading to an accident-break any link in the chain, and the accident is prevented. Crossfield agrees. For example, the most visible accidents in U.S. history resulted not from a single action or inaction but from a lengthy series of events culminating in someone having a bad day. Crossfield cites the July 19, 1989, crash of United Airlines (UAL) Flight 232 at Sioux City, Iowa, as a prime example. While the accident itself occurred on a single day, the links in the chain were forged years earlier when the DC-10s design allowed catastrophic failure of the tail-mounted center engine to disable all three hydraulic systems. If another crew had been aboard UAL 232 that day instead of one led by Capt. Al Haynes and supplemented with a deadheading DC-10 check pilot, that accidents outcome would have been much worse, Crossfield believes. Links in the chain can be good and they can be bad.

Similarly, Crossfield points to November 5, 1959, the day the X-15s rocket engine caught fire during the research crafts fourth flight and third one with power. That event led to an overweight landing and failure of the fuselage. But Crossfield maintains the events leading to the explosion happened as many as 15 years earlier when engineering decisions concerning the engine and the valve were made and components were manufactured. Break a link in the chain, and the accident doesnt occur.

Flight Competence
Perhaps with a trace of scorn for bureaucracies devoted to it, Crossfield also has some strong opinions on the concept of flight safety. I dont believe in flight safety, he told us. I believe in flight competence. In fact, Crossfield is a firm believer that there really is no such thing as flight safety: The safe outcome of a flight really depends on what happens on the ground, well before takeoff. Instead of something inherently dangerous about the aircraft, the operation or aviation itself, properly preparing for a flight means there will be no real surprises.

Put another way, he believes that accidents happen before the aircraft even leaves the ground. By way of illustration, he points to his military service during World War II as a gunnery/bombing instructor with a flight training squadron operating AT-6s. The squadron logged some 510,000 hours under his command, with only 11 students killed in flight operations. There were no engine failures involved-for lack of preparation and planning, all were dead before they left the ground, he says.

And that may help explain his success with research aircraft. Remembering those flights, he points out they were well-planned and extensively thought through before he got anywhere near the airplane. When asked the obvious question-How did you do that?-he responds that he and the assembled team of engineers used their best judgment resulting from years of experience. Among other questions they asked themselves when planning high-risk flights was one with which we all should be familar: Is this worth the risk? When he didnt think it was, Crossfield maintains he would pipe up and say, Im not comfortable with this. On those occasions, Flight Test Unit Director Walter C. Williams would respond with something like, Okay, you heard the pilot. Scott, Ill give you 24 hours to decide to fly it or decide what youre uncomfortable with. If you say you wont, well get somebody else. He always gave me that latitude and I could generally pick out what it was that was bugging me. Generally, it was initially instinct that made me ask for more time.

That additional time to think through the planned flight granted by the legendary Williams-coupled with a healthy dollop of instinct-gave everyone the luxury of thinking through its troublesome aspects and coming up with ways to minimize or eliminate them. That the planning process worked is evident in the results.

More on Planning
Of course, there is more to planning a flight than choosing its time and date, says Crossfield. Every aspect of the flight must receive the time and attention of those involved. Not surpringly, Crossfield remembers that he would go through the planned flight in his mind the night before, looking for its critical phases and thinking about what he would do and the choices he might have to make.

And, he stresses his desire to avoid surprises. While he readily admits to being an old pilot, Crossfield adamantly maintains he is not a bold pilot. I like to keep things in the middle of the green, he explains, and his penchant for planning extends beyond merely thinking through the sequence of events scheduled for an upcoming flight. For example, while Crossfield maintains hes never used a flight simulator for anything other than practicing procedures, he stresses that ground-based practice is useful, but is not a substitute for planning.

Even so, he readily admits that one cannot plan everything. In those situations-like the one involving UAL 232, the crew of which found themselves facing a situation for which they had never trained-the outcomes depend on experience and instinct.

Flight safety systems that go by rote or by the book-particularly like the airlines; you know, if you have these signs, you do this procedure, period-dont draw on the experience or professionalism of the crews, Crossfield maintains. And those systems are of little help when a bunch of things go wrong.

Divine Intervention?
Sometimes, though, were stuck holding a bag empty of experience and hoping the one with luck has something in it. Highlighting this point, Crossfield told us of a flight he made several years ago over the Oregon coast. Due to his own freely admitted lack of planning, he found himself above a solid cloud deck, low on fuel and with his airplane suffering from a complete electricial system failure. Luckily, he knew where there was some VMC and headed in that direction. First, he found one small hole in the cloud deck; it was much too small to use for a descent. Soon, another, slightly larger one came into view but it, too, wasnt large enough to use. A short while later, he came across a third hole, larger than the rest and with an airport runway beneath it. You can imagine the rest. Soon, he was safely on the ground and an A&P was ordering the parts needed to repair his plane.

Noting his firm belief that all of his close shaves have come since he left the research-flying business, Crossfield also shared with us a story involving another flight, one about which he unapologetically states he doesnt remember much. It seems his plane had developed a leak, a nasty one involving the exhaust system and carbon monoxide. In cruise at high altitude over the Rocky Mountains, Crossfield apparently lost conciousness and only became fully aware of where he was and what he was doing after descending to a lower altitude on approach to his destination. It wasnt until later, after installing an old-fashioned dot-type carbon monoxide detector-which immediately turned dark, indicating presence of the gas-did he understand what happened. Despite his luck-divine intervention?-in that episode, he now flies with a electronic carbon monoxide detector.

How did he survive those two flights? Running on divine intervention, he calls it. Maybe so. But lacking an empirical method to quantify divine intervention-for example, how can one determine if the reservoir is empty or full, and where do we go to replenish our supply?-we have to adopt other methods and practices to help ensure the safety of our flight operations. What steps can we take to ensure we come home for dinner after, say, being the first to fly the X-15 under power?

The easy answer is that there are no easy answers. Instead, there are numerous things we can do to minimize our exposure to risks, even those risks we may not fully understand. All of them require discipline, confidence that we have imagined the unimaginable and the experience to know the difference.

What is Aviation Safety?
Summing up, what is Scott Crossfields definition of aviation safety? As he describes and practices it, its a multi-faceted concept, one depending heavily upon planning, experience, instinct, competence and attitude. Employing those skills and characteristics while finding problems and developing solutions is aviation safety, he says.

Of course, thats not all there is to it. We also have to have the discipline to know when our planning is complete, to know when the proposed flight is beyond our capabilities and to know when we should call it a day. A little divine intervention-luck-doesnt hurt anything, either. And those are not such extreme concepts, after all.