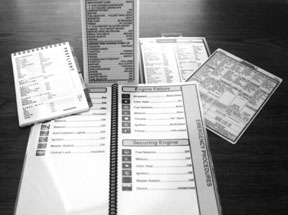 Checklists come in a variety of flavors, both printed and electronic. You can buy them, build them yourself, or simply photocopy the ones already printed in the aircrafts Pilot Operating Handbook. You can build them into some avionics or display them on a handheld electronic device. Which is right for you depends largely on what you want it to do.

Some pilots prefer to use flow checks, backed up by abbreviated checklists to ensure they dont miss any items. Others prefer more complete challenge and response checklists that include target instrument readings or airspeeds, among other information.

Dead Trees
Virtually every airplane has some kind of checklist included in the purchase price – the one in the POH. Many pilots simply photocopy the short versions and stick them in a seat pocket or clipboard. The obvious advantage is that its available and accurate. However, the longevity leaves something to be desired and the format may not be the most cockpit friendly.

That fact has spurred a cottage industry of printed checklists, with CheckMate Aviation and SureCheck Aviation leading the field.

Commercially available aircraft checklists come in two basic forms, a card that lists items to be checked and a booklet that elaborates on those items. The differences between the manufacturers amount to differing execution of those concepts – size, formatting, colors and extra features that are not really part of what you might otherwise consider a checklist.

The fundamental difference – card or booklet – is determined by what you want out of a checklist. For example, a card might contain a cruise checklist that will say throttle, prop, mixture, instruments, HI to compass, fuel while the booklet from the same manufacturer might say power – see cruise performance chart, trim – adjust, mixture – as required, instruments – check, HI to compass – set, fuel selector – proper tank (fuel pump ON to switch, then OFF)

Both forms of checklists typically contain a bit of supplemental information, such as oil capacity, tire pressure, tower light gun signals. The booklets, by virtue of their additional space, contain more of this kind of stuff. You might find METAR codes, VFR cloud clearance/visibility requirements by airspace, crosswind component charts and other data.

We compared printed checklists to those found in the Pilot Operating Handbook for several airplanes and found that the commercial version is not a simple rip-off of the manufacturers. They do, however, contain essentially the same elements. The primary differences are in the order in which some items are outlined – cracking throttle before or after advancing the mixture on engine start, for example – rather than substantive differences. Which is better? Were not sure there is a better in these kinds of cases.

Searching for differences between SureCheck and CheckMate, we find the same kinds of differences – wed hate to call them discrepancies – between the brands, but there are other factors that might come into play for some pilots.

CheckMate makes more use of colors and fonts and boxes. SureCheck tends to use a more straightforward, clean design. We think SureCheck products are a bit easier to read, but CheckMate may suit your taste better and, besides, its not that big a difference anyway.

With that in mind, you may just want to build your own. Using a personal computer and the manufacturers checklist, most people could do a passable job of formatting and constructing a set of checklists that meets their needs. Get the thing laminated at an office supply store and youre ready to go.

This has the advantage in that you can tailor it to your airplane, your equipment, even your home airport if there are idiosyncrasies there. You can make the type a size easy for you to read – important if you wear bifocals – and group items according to what you think is best.

The downside, of course, is that it takes time, maybe a lot of it. The commercial checklists are so common and of such variety that you should be able to find something that fits your needs for less than the cost of an hours worth of avgas.

If you want a simple-to-read laminated chart that is essentially a multi-page reprint from the POH, theyre available for less than $10 from Essco Aircraft. That saves a lot of work.

Digital Solutions
Some pilots, however, think another chunk of paperwork is the last thing they need to haul around. They would rather use a personal digital assistant than an address book and would rather carry extra batteries than extra pencils.

For this class, the offerings are far more varied. There are a few dedicated electronic devices that handle checklists and possibly other tasks with ease. Up the ante a bit – quite a bit – and you can use avionics that come with the capability to have custom checklists installed.

A new entry in the electronic checklist arena is the Checklist Injector by Pine Mountain Aerotech. The unit has been available as a panel-mount unit for a while, but regulatory issues made installing it a bit problematic in certified airplanes. The company has turned it into a portable device smaller than a pager that plugs between your headset and the aircraft.

You set up the unit by recording up your checklists using the built-in microphone. The unit then plays the items through your headset, allowing you to acknowledge or defer each item. If you defer, its repeated at the end of the checklist. You can also set it up to offer reminders such as switching tanks at specified intervals.

The number of checklists available and the number items per checklist is limited only by the fact that the devices memory can record up to five minutes of sound.

A similar product, the AirCheck Cockpit Voice Recorder, is a larger unit that also plays back recent radio transmissions. The $499 unit comes with checklists pre-programmed by the factory.

Our test of the Portable Checklist Injector found that it worked as advertised and was simple to operate. One the one hand, we could see attaching it to the side panel of the airplane or hooking it on a seatbelt, despite the extra wire it would add to the cockpit. However, the $595 list price left us thinking maybe there was another way to accomplish the task.

That search leads to products such as SureChecks Echo software, a $29 program you load on your PDA. Note that this product only works with a PDA running Palm OS 4.0 or earlier, although the company says it is developing versions to run on PDAs using Palm OS5 and PocketPC operating systems.

The Echo software allows your checklists to be fully editable, including changing performance charts. In short, you can use it like a commercial laminated checklist or one youve customized yourself, with the only difference being paper vs. plastic. However, the Echo software has more features that add to its appeal by incorporating an E6B calculator, twin timers and other goodies, perhaps sparing your cockpit further clutter.

The catch, of course, is that you have to have a PDA and use it. And if the battery heads south while youre heading to 10,000 feet youll have to have Plan B ready anyway.

So if you dont want to bother with batteries, how about something installed in the panel?

FlightComs Digital Voice Recorder, which fits in a standard 2.25-inch panel hole, includes a clock, electronic checklist and recorder that replays recent radio traffic. It also sucks $529 plus the cost of installation from your flight funds.

Advanced avionics wouldnt be advanced without checklists, and the Vision Microsystem engine instrumentation system includes programmable checklists, as does the Avidyne Integra multifunction display. In the Avidyne-equipped Cirrus SR-22, for example, there is actually a checklist to keep track of the checklists.

Such units are so powerful, however, that we consider their checklist capability to be irrelevant, as anyone thinking about buying them would not do so based on their ability to replace a few sheets of paper.

The Bottom Line
The end result of all of the checking for checklists is that virtually all are serviceable, and the decision should rest on your preferences concerning cockpit clutter, cost and customization. Face it, you could make a checklist that included every conceivable item, but then it wouldnt be so much a list as a textbook.

The core function of a checklist – to make sure you dont forget an important item in configuring and operating the airplane – means that you have to already know the stuff in the first place. We think that means you can dispense with the heavily detailed lists.

Instead, focus on using flow checks and memory mnemonics, followed by a checklist to verify youve not missed anything. That makes a lot more sense to us than using a checklist as a recipe for how to fly. Do that and youll stand a good chance of getting cooked.

You shouldnt need a GUMPF check to remind you to drop the gear, the airplanes performance and attitude should tell you its time. The GUMPF check, then, is what you use later to verify that youve put the wheels where they belong for landing.

The old joke about a passenger losing confidence in a pilot who has to read the instructions actually holds some merit. Use the checklist as a way to complete an orderly and complete cockpit check before each critical phase of flight.

If that takes a book of instruction, you might want to rethink your fitness. Instead, it should flow naturally, augmented by itemized checklists to ensure your memorys as good as you think it is.

Also With This Article
“Checklists That Work”