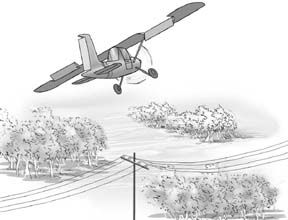 Pull up a chair in front of my hangar at the approach end of runway 25 at Orlando Executive Airport. Lets grade some landings.

At this busy airport – where trainers, $100 hamburger chasers, business travelers and corporate jets ply in essentially equal numbers – the odds are excellent that fewer than 30 percent of the airplanes youll see will land in the first third of the runway.

The approach is over a small lake and there are no tall buildings or other obstructions around, hence theres no reason to come in high. Yet pilot after pilot plunks the airplane down in consistent demonstrations of poor energy management and lousy stick and rudder skills.

There are a lot of reasons an airplane can end up in the pattern with more energy than it needs, including vectors from ATC, winds aloft and maneuvering to avoid traffic. The important thing is that the pilot must take steps to prevent the airplane from landing fast and long. That is the most common spot for a forward slip.

As flaps and long-paved runways have proliferated, many pilots have relegated slipping to the dustbin of flight training. Thats a shame, too, because slips are a more precise way of bleeding off energy than are power and flaps.

But forward slips also play an important role in planning for emergency or precautionary landings. They allow you to more precisely hit fields that arent accompanied by 6,000 feet of concrete or that are hemmed in by trees, fences or wires.

While forward slips may not be important enough to stay in the top drawer of your toolbox, they belong in there somewhere – and theyd better not be too dusty from disuse when you need to use them.

Slip Mechanics
Slips are simply uncoordinated turns, but theyre uncoordinated in a why that induces the airplane to do your bidding. Side slips are commonly used in crosswind landings, with the bank neutralizing the crosswind component and the yaw aligning the airplane with the runway. Forward slips involve using the airframe as an air brake by presenting the side of the airplane to the relative wind. That allows an increase in descent rate without a corresponding increase in airspeed.

Aviation folklore is full of admonishments to avoid slipping with full flaps, but a review of operating handbooks from a variety of different models and manufacturers found that most are mum on the issue. The book for an older Cessna 172 does say that steep slips with more than 20 degrees of flaps may show a slight tendency for the elevator to oscillate under certain combinations of airspeed, slip angle and center of gravity loadings. Thats because the flaps can partially blank airflow to the elevator. However, the same caution is not found in other Cessna POHs.

Another concern when it comes to prolonged slipping is that the fuel pickups can unport, particularly if fuel is feeding from the low wing and the fuel level is low. However, for the purposes of using slips to fine-tune altitude, this is a moot point. In short, it is difficult to find a compelling reason not to incorporate slips into your repertoire.

You shouldnt conclude that our enthusiasm for slips means the flaps should remain stowed. There are good reasons for flaps. Besides, slips address a different dynamic.

Stabilizing the Approach
In the terminal environment, you have more than pitch and power to control airspeed and altitude, because slips give you a measure of control over drag. Why mess up an otherwise stabilized approach by reducing power just because youre a bit high? Slip down to the proper altitude, remove the slip, and the airplane finds its previous equilibrium.

Despite the fact that its uncoordinated flight, the forward slip is actually a benign flight regime. There is a possibility of a spin if you stall, but unless youre quite ham-handed the airplane will simply roll wings level and allow you to correct the rudder position before it departs into an over the top spin entry.

The dynamics are quite different from a skid, in which the low wing stalls first due to excessive rudder in the same direction as the turn.

The value of the slip during an approach is that you can fly the approach by the numbers, with a stable airspeed and descent rate. Then, if you find yourself a dot high and maintaining that position – due to, say, a temporary decrease in headwind – you can drop the airplane down without upsetting the balance.

Sure, you can also fiddle with pitch and power. The slip isnt the only answer, just another one.

Slips are especially useful in turns when making a circle-to-land off an instrument approach because its easier to keep the runway in view while flying a tight pattern. Slips also aid visibility should the windscreen be obstructed by ice or oil.

Forced Landings
The primary function of slips is to lose altitude for landing, so it makes sense that slips play a very important role in forced landings.

During a normal approach, you can manipulate flaps, power and pitch to arrive at the key position with approximately the proper airspeed and altitude. If youre off a bit, you can use power to fix your position. If youre off a lot, the engine will take you around for another try.In the case of a forced landing or precautionary landing, you dont have the same options. The field is likely smaller than an airport. The approach corridor is more likely to contain obstructions. And you dont have power to dig yourself out of a hole.

It makes sense, then, to bee-line it to the landing site, preserving what altitude you can, and then lose altitude in a controlled way when youre always within glide distance of your landing site. This is where a slip, slip with flaps, or steep spiral descent will come in handy, depending on the circumstances involved.

The slipping turn allows you to induce some dramatic descent rates, but to do it with less discomfort to passengers. You can adjust the descent rate continually, rather than, say, dumping in flaps and then waiting a while for feedback. When the engine is out, its better to be a little high than a little low as you approach final.

Emergency Descents
There is a tendency for some pilots to think of slips as the end-all for expedited descents. In fact, there are several compelling reasons not to use them if your goal is to get the airplane down in a hurry, as might be the case with an onboard fire.

The primary reason not to slip is that its not the fastest way to the ground in most airplanes. During flight testing in a Citabria, we were able to get a measured descent rate of 3,450 fpm with the rudder at the stop and the airplane pitched down to Va. Thats a healthy rate, but using a 45-degree banked dive at Vne yielded a vastly superior 4,720 fpm.

We didnt pitch down further in the slip because, as it was, we were hanging from our Hookers. Simply put, the attitude was almost unbearable as it was. We couldnt see going more extreme, even in an acrobatic airplane, for long. And in an airplane without at least a tightly cinched four-point harness youll be peeling yourself off the panel.

Having flaps further complicates the issue. Popping in flaps introduces another airspeed limitation, Vfe, that may limit your descent rate as well. Because airplane models are different and some have different Vfe figures depending on whether full or partial flaps are deployed, finding the answer here requires flight testing if its not in the airplanes POH.

For our flight testing, we climbed to altitude, established the descent configuration of interest and, when stabilized, recorded altitude lost in 30 seconds. We did each configuration a minimum of three times. Average the figures, double it, and you get a reasonable number for max descent rate.

The beauty of the slip lies in how easily you can control it to make fine adjustments to descent rate. You can feel the effect of the slip instantly, and yet the airplane recovers to normal flight immediately after the control inputs are removed.

Also With This Article
“Good Slip Vs. Bad Slip”
“Tricks of the Trade”
“Why Burn Off Energy?”