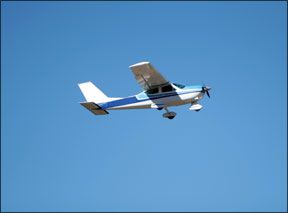 If youve heard this once, youve heard it a hundred times: “Im really behind the power curve today.” Youve heard it, but do you really know precisely what it means? Can you sketch the relevant graphs, fill in the data points, then relate it to the real, practical world of flying an airplane?

Theres good reason to be able to do this, for a fundamental understanding of the basic lift/drag curves that remorselessly govern aircraft performance relate to

directly to refined stick and rudder skills. It may be enough to have a good seat-of-the-pants feel for what the airplane is doing, but its far better to have both that and a lucid grasp of the physics.

Where this applies most directly is in that great undersung skill we all had to learn to muddle through a private pilot checkride but havent used since: precise control in slow flight. Slow flight is undersung because its so rarely used where its of most practical advantage: high performance short field landings and adjusting the interval in a crowded pattern.

Next time you fly, try this experiment: Set up your best shot at a short field landing and see if you can match the POH numbers for touchdown and rollout. Or set yourself the goal of always making the first turnoff on every runway and see if you make it. Chances are, you wont. Top performance in short-field work requires absolutely precise control of speed just above the stall. Most of us dont do this very well because it takes a lot of work and no small amount of nerve. With no compelling need to stuff the airplane into short runways, why bother? Who cares if you float 600 feet and make the third turnoff because you flew the approach 10 knots fast? Probably no one. On the other hand, that sort of laziness leads to skill atrophy and before you know it, youve smoked off the end of a runway that wasnt really very short.

Everyone can draw the classic lift-over-drag bucket. Aviation is full of curves like the one on the opposite page and they all share a similar shape-a hyperbolic arc often with airspeed rising to the right along the X-axis, and power required or drag or some other value increasing on the Y-axis.

On most graphs, Max L/D is shown with airspeed along the X-axis, but arguably, the better way of illustrating it is with angle of attack plotted against drag. We dont do it that way because pilots are trained to have only a fleeting relationship with AoA and our airplanes dont have AoA indicators, so we use airspeed instead. (For a more-detailed discussion of AoA indicators, see “Flying All The Angles,” November 2008.)

Max L/D is the gateway to proficient slow flight, but its not the speed at which best slow flight will occur. Nor is it, as many sometimes assume, the same as stall speed. The place to be for maximum performance slow flight is well to the left of Max L/D and just above the stall. Light aircraft POHs give stall speeds and recommended speeds for short field work, but the latter arent always adjusted accurately for weight and tend to be slightly too fast anyway.

If we had drag indicators in our airplanes, we could go out and plot the L/D curve right up to the stall. Just fly a series of airspeeds, plot the speed and data, then fill in the curve. Since we cant measure drag, the next best thing is to measure the power we need to overcome drag in various configurations.

Try this experiment. On a pad, draw a rough X-Y axis curve, with speed along the X axis and power along the Y. Set the airplane up in steady-state flight with reduced power and half flaps. Start at any speed, but to keep things simple, make it 90 knots indicated. While maintaining the same altitude, reduce the speed to 85 knots, then 80 knots and so forth. Plot an X-Y point at each power reduction and soon youll see the curve developing.

At some point, the airplane wont maintain altitude at whatever speed youve trimmed it. In order to hold altitude, youll need to add a little power-youve passed the bottom of the thrust-required curve and, for our purposes, youve also passed Max L/D.

This is the oft-quoted back side of the power curve. In days of yore, it was sometimes called the region of reversed command, although that term doesnt seem common anymore. On this part of the L/D curve, more power is required to fly slower because induced drag is increasing rapidly. The “reverse command” part is that if more power isnt available, raising the nose will result in more drag and sink, not the climb you were hoping for. This is the textbook stall/mush accident short of the runway. The pilot gets too slow and too low and firewalls the throttle while jacking up the pitch. Drag outstrips thrust and rather than climbing, the airplane sinks. In reverse-command think, lowering the nose would initiate the climb.

If you venture far enough left on L/D curve, youll reach the stall point, regardless of how much power is available, the exception being an airplane whose thrust exceeds its weight. But if you fly an F-16, you already know that.

So whats this got to do with slow flight? Everything. The bottom of the L/D bucket, give or take a little, is where best glide and maximum range live. Max performance slow flight is to the left of the bottom of the bucket, but a little right of the stall. You might think of this as the comfort zone, and where you fit into it will determine how well your short field landings work out.

By running the exercise described above all the way to the stall point, flying the airplane in the burble with the stall horn squealing and maneuvering a bit in this configuration, youre more likely to develop a comfort level thats three or maybe five knots slower than you would otherwise use. In short field work, that can make the difference between a ho-hum touchdown at a country airport and shearing off the gear in a ditch.

While youre practicing the slow flight regime, make a point of controlling bank with rudder. Recall from your basic training that in slow flight approaching stall, aileron control is the first to fade, rudder the last. In deep slow flight, deft rudder input will easily (and comfortably) keep the wings level without risking a spin entry.

For max-performance slow flight, you need a speed slow enough to bleed off excess energy, but fast enough to retain good control. The usual one-size-fits all starting point for normal approaches is 1.3 times VSO, but this is almost always too fast because it assumes gross weight and youre rarely landing that heavy. Most of us land a lot lighter than that. As a rule of thumb, reduce the stall speed by half the percentage of the weight change.

Example: Your airplanes gross weight is 2800 pounds and the gross-weight VSO is 57 knots. But youre landing at 2400 pounds, 14 percent below gross. Reduce stall speed by seven percent, or four knots.

At thats probably still too fast. At 1.2 VSO, the example given here works out to a 64-knot approach speed at the lighter weight. Is that doable? Absent gusty winds, it probably is, although youll be at that point on the L/D curve where youll want to carry some power to moderate the sink rate. The way to find out how comfortable this will be is to experiment with deep slow flight at altitude. Keep two things in mind: If you have to recover a sink with a lot of power, dont raise the nose because youre well into the reverse command area. As the power comes in, push the nose over slightly to accelerate, than pitch back up. You need to let the power get you to the right side of max L/D.

Second, when youre on the back side of the curve, induced drag is high, but as you near the runway and you enter ground effect, it will decrease significantly. This means that what felt righteously slow on short final will actually yield a little float over the runway, chewing holes in your max-effort short field exercise.

To adjust, you can reduce power gently as you feel the ground effect cushion or, depending on comfort level, just fly the approach a knot or two slower. If the latter, hold the pitch right to the runway, slip the power once and plop the airplane down. Short field landings arent supposed to be grease jobs.

Theres one other application for this graduate-level slow flight. When you find yourself in a crowded pattern behind slow trainers, rather than extend the downwind into the next state, slow down to match and hold the interval, then fly a more or less normal pattern. If you think a Bonanza or a Mooney cant out-slow the typical student in a 150 or a Katana whos flying 10 knots too fast anyway, maybe you havent practiced enough.

And thats the takeaway here. All that slow flight you learned as a student had a purpose that seems to get profoundly lost in the typical wave of the hand that passes for a flight review these days.

Next time you fly, spend 30 minutes experimenting on the back side of the power/drag curve. Skills evolved there will simply make you a better, safer pilot.