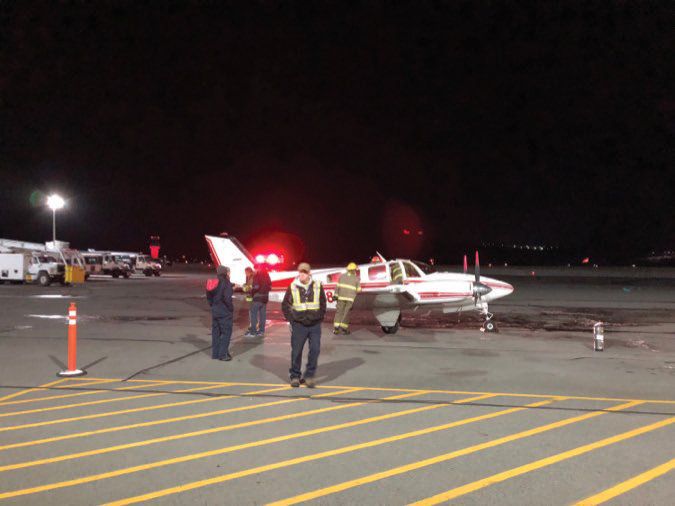 Editor’s note: The following is a first-person account of an in-flight emergency. It was originally posted by the pilot, David Fill, to an internet-based pilot’s forum and has been adapted forAviation Safetywith his permission.

Ihad an eventful flight the other night. The day before, I had picked up my Beech Model 58P Pressurized Baron from its annual inspection and some extensive panel work at a facility in Massachusetts. After the paperwork was complete, I did my usual careful post-maintenance inspection and then test-flew it around the pattern several times before putting it away in my hangar back at its base.

The next day, I loaded up my wife, my brother and his girlfriend and headed down to the Carolinas for a couple of business stops while the ladies got in some shopping time. We stopped in Northern Virginia on the way up for about half a day. That evening we launched back home to Massachusetts. Due to a bunch of Pireps for moderate or greater icing up higher, I filed IFR for 11,000 feet msl rather than the FL210-230 I prefer. It’s a FIKI (flight in known icing-approved) airplane, but I’m a stickler for avoiding icing whenever possible.

Soon, we were in solid IMC but with a smooth ride, cruising along on autopilot with my wife in the right front seat and my brother and his girlfriend in the back. Right after I checked in with New York Center about 30 miles south of Wilkes-Barre, things got busy. There was a quick flash of light from the upper left side of the panel, followed quickly by smoke streaming out from between the top of the panel and the glareshield. Not just a little bit of smoke, but enough to fog the cabin pretty well.

The Stuff Behind Your Panel

Especially when considering older airplanes, or those that have gone through an avionics upgrade or three, there can be a lot of wiring behind your instrument panel. And older airplanes may present another challenge: Old wiring insulation can deteriorate, along with circuit breakers and connectors, after a few decades of temperature extremes, turbulence and my landings.

An airplane coming out of its annual inspection, which also saw avionics work being performed, can be particularly susceptible to this kind of an event. For example, we’re aware of an older Bonanza that came out of an avionics shop with a Wi-Fi dongle zip-tied behind the panel. That kind of attachment method is neither uncommon nor unsafe, except when the supposed structural member is actually a metal capillary line serving the fuel pressure gauge. It carries 100LL fuel from the engine to the gauge under some pressure and should not be used to mount anything, much less a powered avionics component, no matter how light or small it is.

At top right is an image of a different Beechcraft Baron undergoing an avionics upgrade, but this view actually doesn’t show much of the electrical wiring routed behind the panel. Keep in mind there are wires running through the sidewalls, in the overhead and under the floorboards, also.

At bottom right is the offending Nulite component. It seems to have been installed so that the white (power feed) wire became pinched. After a couple of flights, it apparently shorted out against the aluminum instrument panel, overheated and began melting insulation. The inset tells the tale.

It doesn’t take much to generate enough smoke to convince a pilot that the airplane needs to be on the ground,now. — J.B.

I immediately let ATC know we had smoke in the cabin. I then killed the master switch and both alternators, and then started a descent. The smoke stopped within a few seconds. The cabin was pressurized for basically sea level. I turned the master switch back on at that point since killing power also killed the autopilot, both GPS navigators and their communication radios, obviously, as well as the MFD. The only position info I had was from ForeFlight on my iPad, powered by its internal battery.

At that point, I dumped the cabin to clear the smoke, which worked fairly well. Luckily, we broke out of IMC at about 9000 feet or so. With my radios back up, I worked with ATC for landing options. The Wilkes-Barre/Scranton (Penn.) International Airport (KAVP) was the closest, at about 26 miles and one o’clock. I asked for a vector—several times actually—as the GPS side of my radios was still booting up and acquiring.

Soon, Center passed us off to Wilkes-Barre Approach and I got the usual request for fuel and pax (4:30 remaining and four souls aboard). Runway 22 was in use but I was set up for a straight-in to Runway 4; ATC said the ILS for Runway 4 was up and running and began vectoring us toward its final. But after ATC provided the surface winds—which were out of the southwest at nine gusting to 26, as I recall—I elected to enter the downwind for Runway 22 since it appeared the smoke had stopped.

They requested we maintain 4000 feet if able. I had gotten a bit busy pulling up airport info and working the checklist, and we had descended to 3500 feet. The controller immediately queried whether we were able to maintain altitude and requested we climb back to 4000 for terrain/obstacles, which we did.

About 12 miles out, I still didn’t have the airport in sight, so I asked them to turn the lights all the way up. They did, and immediately we were able to spot the field. Once we switched over to the tower, we were advised the trucks had rolled and were positioned by the runway in case we needed to evacuate. If not, they would follow us to the ramp. They were on the ball and turned the lights back down on short final for us so we could actually see the runway without us even asking.

Amazingly, I ended up greasing it on with what was probably one of my best landings ever in that airplane. We exited the runway at midfield, right in front of the fire station and all the ARFF vehicles staged in front of it. We parked in front of the FBO and jumped out.

The fire chief met me right there, wanting to know what happened. He said the info they got from New York Center was that it was an aircraft with 58 people on board on fire (I’m guessing that was a miscommunication involving it being a 58 Baron) so they had called for mutual aid from nearby towns. That was the reason for the dozen or so fire trucks and ambulances standing by.

While I was talking to him, a fireman jumped into the plane and started taking the panel apart. While I applaud him for his assistance, I told him it was good as there was no further evidence of smoke or fire and I didn’t want any further damage. They offered to disconnect the battery, which I declined. I filled out a one-page form with my contact info, and I thanked them for their help.

On-call maintenance was contacted and arrived within about 45 minutes. The technician quickly identified the issue as a Nulite instrument ring on the vacuum gauge. It had burned/melted the light and associated wires due to what appeared to be a pinched wire. They fixed us up and we were on our way in about three hours or so from the time we landed. Luckily, the airline terminal was right next door, so my passengers got to decompress at the airport bar for a bit after the excitement.

It was a good learning experience and I thought I handled things fairly well, but there are a few things to improve upon and lessons learned. For example, I presume the issue didn’t occur in the five or so hours of flight time since the work was done because, although I tested the panel lights and they worked, I didn’t leave them on since we were flying in daylight. Only after being on for about an hour did things heat up enough to cause an issue.

I had just completed my annual recurrent simulator training the week before. All the emergency procedures—including partial panel and emergency descents—were obviously very fresh in my mind.

It turns out my brother and his girlfriend in the rear-most seats were off-headset and didn’t have a clue what was happening when things got busy. That made things worse for them. Once things got busy, I didn’t have time to explain.

With Runway 4/22 being 7501 feet long, I probably could have/should have used the straight-in to 4 to save some time. But since there was no further evidence of smoke or fire, I decided against it due to the winds and the possible ice in the area on the ground from recent weather and not knowing the field conditions.

I didn’t use my oxygen mask as it’s not a quick-don system like my King Air. At such a relatively low altitude, I didn’t think it was necessary to take the time to plug it in, although if things had gotten worse it would probably have been a good idea. Then again, who knows: The possible fire was in the panel right next to the oxygen connection. The oxygen probably would have helped avoid some of the acrid smoke I was tasting for the next several hours.

At night in IMC is a crappy time for any emergency, never mind one where shutting off all electrical systems is the first response. Without radios or GPS guidance, finding a field would have been a lot harder in that area as there’s not much out there and it wasdark. Luckily, ceilings were pretty high.

Anyway, we ended up safe and sound. I got a quick call from the FSDO the next day asking what happened and that was it.

There’s not that much to criticize here. The original sin—a pinched wire on an instrument light—isn’t something a pilot will discover on a typical post-maintenance inspection. And we often find equipment “issues” only when energizing a seldom-used system.

Getting the plane on the ground—the image at right shows deployment of the emergency vehicles as the Baron taxied in—and disabling the electrical system are the obvious checklist items. Using ATC for vectors and to assist with spotting the airport were good choices. One might quibble with the decision to decline the straight-in to Runway 4, but the situation was under control by then. When in doubt, it’s always best to use normal procedures. All in all, a job well done in what could have been trying conditions. — J.B.

After 10 years in the U.S. Air Force, during which he served as a crewmember aboard heavy transports, David Fill is president/CEO of Fill Aerospace Solutions.

Fly In The Yellow Arc?