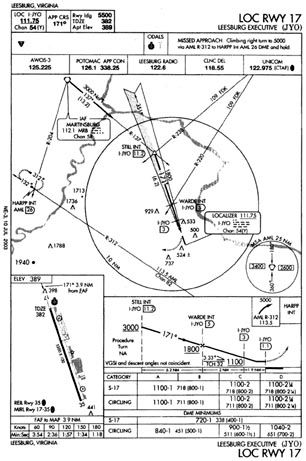 March 2003 was a bad month for the Leesburg, Va., airport. In a 20-day period, two highly capable single-engine aircraft, one nearly new, crashed on the same instrument approach to the airport- the Localizer 17. Both airplanes ended up in the back yard of private residences, raising questions – perhaps rightfully so – among the local populace and some politicians about the safety of those living near the airport.

The NTSB reports on these accidents are still preliminary in nature, but the information contained in them points to questionable aircraft control on the approaches that may have led their pilots to lose control at low altitude and low speed. In other words, the approach went bad and the pilot was unable to remedy the situation.

The first accident involved a Socata TBM 700. The aircraft was completing the second leg of a flight from Florida to home base at Leesburg. After an uneventful en route stop at the Greenville-Spartanburg, S.C., airport, the flight arrived in the Leesburg area to find IFR ceilings and low visibility.

When the pilot checked on approach frequency, the ceiling was 500 feet and visibility one mile. A weather report taken about the time the aircraft was on final approach recorded that the ceiling had dropped to 300 feet.

Approach control vectored the flight onto the localizer about three miles north of the final approach fix at 3,000 feet. Final approach fix (FAF) altitude for the approach is 1,800 feet, which meant the pilot was faced with a fairly aggressive descent.

A private pilot-rated witness said he saw the aircraft appear out of the fog. The witness said it then simultaneously leveled, added power and pitched up as if to commence a go-around. Despite those actions, the airplane continued its downward path and disappeared behind trees.

A second witness reported seeing the airplane exit the clouds headed east. It then made a sharp left banked turn to the north while the nose of the airplane was being pulled up. Shortly afterward, the nose dropped and pointed toward the ground.

In the left seat of the accident aircraft was a private pilot who had reported 730 total flight hours on his airman medical application seven months earlier. The right seat pilot held an ATP and type ratings in several airline turboprop and turbojet aircraft. He reported 8,375 hours on his last medical application. Those two pilots and a passenger died in the mishap.

The second accident occurred at night, about an hour after sunset. A Mooney Ovation2, with just 59 hours total time in service, arrived from the Youngstown, Ohio, area and was cleared direct to the STILL intersection, a fix on the final approach course 6.2 miles outside the FAF, and instructed to join the localizer inbound.

The weather was not a factor. An observation recorded three minutes before the accident reported light west winds, visibility of 10 miles with a broken ceiling at 3,400.

Radar data indicates the Mooney had a full head of steam as it approached the localizer. At a point 16 miles north of the runway, the airplane was making 186 knots groundspeed at 5,800 feet. At three miles per minute, the airplane was just a little more than five minutes from the runway. The airplane shot through the localizer and the controller twice advised the pilot that he was one mile east of the final approach course.

The pilot acknowledged both off-course advisories and radar data showed that he made five to six turns along and across the localizer. By the time the Mooney was two miles north of the FAF, it was established on the final approach course. However, it was still high and fast.

The airplane crossed the FAF 200 feet above the final approach fix altitude and at a groundspeed of 127 knots. To land from such a position wouldnt necessarily be impossible, but it was certainly not stable either.

By the time the airplane was one mile north of the runway, the pilot had managed to bleed off the excess speed, but he was hopelessly high at 1,600 feet – about 1,300 feet above the touchdown zone elevation. The airplane then made a very tight 360-degree turn to the left.

A boy in the bathroom of his home observed the lights of the airplane headed directly toward him when it suddenly nosed over and crashed into a pile of dirt in his back yard.

The pilot, a doctor with four college degrees, held a private certificate with category ratings for single-engine land and sea and an instrument rating. His logbook showed he had accumulated 786 hours with 19.5 hours time in type.

Stable Means Heading, Too
These two accidents share a common theme – the pilots struggled to get established on the localizer and they didnt manage their airspeed very well. Most pilots these days are familiar with the stable approach mantra, but most of the emphasis is placed on airspeed and altitude because that is what causes most of the trouble.

However, dont overlook flying an accurate lateral path, because if a pilot is task-saturated with maintaining the correct lateral course, altitude and airspeed will suffer most of the time as well.

Good lateral path control on instruments is a matter of precise heading control, sure, but it also requires a keen awareness of winds aloft. While it may seem obvious that maintaining a given track is simply a matter of flying a heading that will keep the nav indicator centered, experience shows that many pilots are not up to the task.

Pilots who react to nav indicator movement by turning toward the needle will never fly a precise course. The best they can hope to do is to break out of the clouds somewhere near the runway centerline as they see-saw back and forth over the final approach course.

Knowing the winds aloft permits a pilot to pick an appropriate reference heading when joining the final approach course.

A GPS or Loran navigator makes figuring out the winds aloft easy. Just note the difference between heading and ground track, and between the airspeed and groundspeed. Once established on the final approach course, tracking the course should just be a matter of five- to 10-degree heading changes.

Pilots finding themselves bracketing approach courses or struggling to nail airspeeds or altitudes need to get out and practice basic attitude instrument flying. Forget about shooting approaches for a while. Go up and spend time practicing nothing but precision control of heading, altitude, and airspeed. Make zero deviations your goal.

After knocking the rust off your scan, then go shoot practice approaches using your newly reacquired skills.

Stay Ahead
Part of effective cockpit management while flying on instruments is staying ahead of the airplane. Keep track of your position and anticipate controller instructions. With $1,500 GPS moving map navigators so widely available, positional awareness should never be a problem. Even without one, pilots should always have an idea of where they are in relation to the final approach course and airport.

Use your positional awareness to set appropriate airspeeds. Both the Mooney pilot and the TBM 700 pilot struggled with airspeed. Bearing down on the localizer at 180+ knots, the Mooney pilot at Leesburg virtually assured that he was not going to join the localizer as instructed by the controller. The TBM 700 pilot let airspeed decay to a point that when he started the missed approach, he was likely so far on the back side of the power curve that he could not arrest his rate of descent.

An important factor in staying ahead of the airplane is to thoroughly brief the approach to be flown. The brief should cover the radio facilities to be used (including identifying the final approach course navaid), the minimum altitudes for each leg of the approach, the missed approach procedure, the radio communications frequencies, and the anticipated taxi route once clear of the runway.

If the weather is reported near minimums, get into the missed approach mindset. Fix in your mind what actions youll take if you get to minimums and dont see the runway or if youre too high to land straight-in.

The TBM 700 pilot on approach to Leesburg appears to have been starting a missed approach. It apparently had no bearing on the accident, but the TBM 700 was making a turn in a direction opposite the one called for by the missed approach procedure for the Localizer 17 approach when it crashed. The Mooney pilot, instead of making steep bank 360-degree turns to establish himself on final at an appropriate altitude, should have simply entered a downwind for landing on runway 35 since the prevailing ceiling and visibility were well above VFR minimums and the reported winds actually slightly favored the opposite runway.

Surrender Early
What should you do if you find yourself struggling on the approach to fly a decent course or get airspeed under control? Cut your losses and try again. Tell the controller that youre not properly set up for the approach and for him to box you back around for another try. That term is one he will understand. It may not fit in his plans, but hell just have to make it work.

Sometimes controllers will set you up for unstable approaches. The TBM 700 was vectored onto the localizer only three miles from the FAF, which is the minimum controllers are supposed to use.

Most of the time that is not a problem, but in this case the controller instructed the pilot to maintain 3,000 feet until established. That requirement made it necessary for the pilot to hold a rate of descent of nearly 1,000 feet per minute to make the FAF altitude of 1,800 feet.

The fact that he actually crossed the fix 100 feet low may indicate that he was using a high rate of descent. If the controller sets you up for an unstable operation, its time for the box me back around routine.

And dont be afraid to make judicious use of unable when a controller assigns an airspeed or altitude outside your airplanes capabilities. Back in my charter flying days, I was flying a Baron into Detroit Metro one morning and arrived in the middle of an inbound Northwest Airlines push.

Most instrument approaches end up with the sweet sight of approach lights, but if your approach starts to go sour, dont keep sucking on that lemon. Abandon the approach and try again, this time aiming for precise control of heading, altitude, and airspeed.

Also With This Article
Click here to view “Let George Fly It.”

Bill Kight is a Mooney owner who flies Boeing 757s for a living.