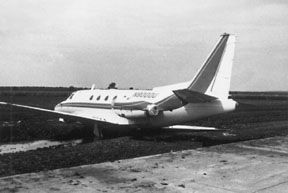 The key for all landings is the pilots ability to estimate how the airplane will descend to its landing. This ability directly affects the timing of configuration and power changes and the amount of maneuvering that might be necessary to arrive at a suitable touchdown point. The pilot needs to be able to maintain the correct glide angle while maneuvering the airplane.

The most important ability – and it comes easier for pilots with glider flight experience – is the ability to estimate the gliding angle and what distance can be picked up with it. All pilots should be able to do a pretty good job of estimating where their airplane is going to land, knowing the normal glide angle for their airplane.

A good final approach is one where the pilot adopts a descent angle that will allow the airplane to reach the landing area with a minimum of floating before touchdown. The airspeed and the descent angle must be accurately controlled.

The best way to practice such approaches is to use power-off accuracy approaches, similar to what youd have to use with an engine failure. Keep the power at idle, instead of relying on the variable power inputs often used in a normal approach. Airspeed will have to be controlled by pitch attitude rather than power, which changes the glide angle, too.

If you fly multi-engine airplanes and conclude that you dont need to practice power-off approaches because the second engine will see you safely in, you may want to reconsider.

Consider the commercial pilot flying a Piper Apache from Salt Lake City to Hurricane, Utah. He encountered IFR weather en route, and air-filed an instrument approach that took him to St. George. He broke out, canceled IFR, and proceeded to Hurricane.

During the descent to the airport, he lost power in the left engine, so he shut it down and feathered the prop. However, having the left engine down required him to manually pump down the flaps and gear. The pilot said, By the time I had accomplished this, I had used up most of the runway and I realized that I would not be able to land.

The pilot then decided to execute a single-engine go-around and began manually pumping the gear and flaps back up. But he was unable to achieve a positive rate of climb and there were power lines approaching. The pilot intentionally executed a forced landing in a field and struck some fence posts.

With a better understanding of the glide characteristics of the airplane, the pilot could have focused on flying a pattern that would have enabled him to extend the gear and flaps, and landed from a normal approach.

The sequence of action in each of the following approaches is to reduce power to idle and glide to a key position. This position is the starting point for the approach, and will help you decide how to get to the proper touchdown point. These exercises are primarily used for practicing engine-out forced landings, but are also useful in getting the feel for well-controlled landings.

90-Degree Power-Off Approach
This approach is made from the base leg and requires one 90-degree turn onto the final approach.

The maneuver begins at pattern altitude and from a rectangular traffic pattern. Fly the downwind leg as normal, including whatever configuration changes are normally made on downwind.

In this kind of a maneuver, the turn to base depends on the wind – a strong wind down the runway will allow the base leg to be flown closer to the approach threshold. When you make the turn to base, the key position is that point about 45 degrees off the intended landing spot that intersects with the base leg.

When you get to the key position, close the throttle and set the prop to high rpm. Hold altitude until the airspeed bleeds to the recommended approach airspeed, then trim for that airspeed as you glide toward the intended landing spot. If your POH does not include a recommended airspeed, try using 1.4 times Vso.

The direction and strength of the wind will not only determine the crab angle you need to maintain, but will also dictate when to add flaps or whether to slip. At this point, throttle adjustment is a no-no unless youve really screwed it up and need to go around already.

When you roll from base to final, slow the airspeed to 1.3 times Vso and retrim. Control the glide angle with flaps, pitch and slips, as applicable. Do not, however, try to stretch the glide just to hit the numbers, touchdown zone marks or whatever youre using as your targeted landing spot on the runway.

Rather than getting locked onto the selected landing point, give your full attention to making a good, safe landing. The base leg position and the flap setting have pretty much determined whether you will land on the selected landing spot. Youll be far better off if you execute a good landing a couple of hundred feet from the spot than to make an awful landing right on the spot.

Most pilots are used to carrying a bit of power through their approach, maybe 1700 rpm on a fixed prop airplane or 17 inches/full rpm on a constant speed prop. At the same time, most people land faster than they need to. This technique will help you learn how the airplane glides without power and will teach you how the airplane looks and feels at slower airspeeds.

The benefits are twofold. Youll tend to land slower, which can help prevent runway overruns as well as loss of control accidents caused by blown tires and failed brakes. In addition, youll be much better prepared to execute a forced landing in case of the loss of engine power for whatever reason.

To execute this maneuver, fly a downwind leg with the landing gear extended. Start from about 1,000 feet agl. If pattern altitude is lower than this at the airport where youre practicing, you can either adapt the procedure or cheat a little on your altitude. The point is that you should learn this technique to apply it to the kind of flying you do and airplane you typically employ.

When you reach the point abeam your intended touchdown point, which is your key position for this maneuver, close the throttle and maintain altitude until you get to either best glide speed or 1.4 Vso. Use a medium bank to make a steady turn from downwind to base. The wind speed and the airplanes glide angle will be the deciding factors in the position of the initial turn and what the degree of bank will be. The base leg will need to be located to best save or lose altitude, depending on conditions, to make sure you reach the desired touchdown point.

You need to judge the airplanes performance, wind conditions and distances so you can glide to the spot that is the base leg key position in the 90-degree power-off approach.

Keep in mind that the key position is not a fixed point on the ground. Its not a landmark you need to reach at a certain altitude.

If youre doing your training at your home field, the tendency may be to pick a point on the ground to guide you, but that wont help you build the judgment and estimating skill. The landmarks will be different at every other airport, and even at the same airport if the wind favors another runway. In addition, changing wind conditions will make it impossible to standardize your approach if you depend on ground-based landmarks.

Once you get to the spot that is the key position for the 90-degree power-off approach, the approach and landing are the same as you have already practiced.

The 360-Degree Power-Off Approach
Further refining your ability to judge glide, turns and distances is the 360-degree approach. This maneuver is used extensively in the military, where jet pilots use them as flame out patterns. The 360-degree power-off approach is designed to be a circular pattern that can be steepened, shallowed or even discontinued any time to get a desired flightpath.

A word of caution about practicing this approach. Depending on the airspace in which youre practicing, it may not be appropriate at uncontrolled airports and it may not be permitted at controlled airports. An uncontrolled field that sees three arrivals per day might be fine, but at a busy one you will create a real problem with other traffic. If you operate from a towered field, try to pick a time the controller wont be very busy and discuss it with ATC ahead of time. You can also do this away from an airport, using a ground landmark as a surrogate runway.

The approach is started with the airplane flying in the direction of landing over the approach end of the runway (or slightly abeam it). You should start at 2,000 feet agl with the flaps and gear retracted. When you get over the intended landing point, close the throttle, trim for best glide speed and bank in the direction that will put the airplane at the downwind key position abeam the intended touchdown point.

As in the previous approaches, flaps, bank angle, pitch changes and slips can all be used to adjust the glide path. Plan to be above 300 feet agl when the turn to final is completed.

The Straight-In Approach
A straight-in power-off accuracy approach is both the easiest and the most useful because it can be started at a much higher altitude than a normal pattern is flown and it resembles the final phase of every normal landing.

Keep it fixed and a good landing is assured as long as you keep the speed and descent rates under control.

The pilot of a modified Mooney M20K was flying from Atlanta to Detroit, descending through 10,400 feet, when he reported a vibration and rough-running engine. The controller offered him an airport 15 miles away, or another 7 miles away. He picked the more distant one.

He reported the field in sight from about 3 miles out. The tower controller said the airplane appeared to be at a normal attitude in the descent, but the airplane struck trees three-quarters of a mile from the runway.

The heavily modified airplanes recommended engine-out glide speed was 87 knots, but the airplanes calculated airspeed during the descent was 147 knots.

As the airplane was configured, it should have been able to glide more than 20 miles from 10,000 feet. The pilot passed up an airport and several adequate fields during his descent, and in fact should have made the intended airport easily, but came up short because of poor speed control.

Power-off accuracy landing stages are landing exercises in which the desired touchdown point is a fixed spot on the ground surface.

Planning and good judgment are essential in making the actual landing as close as possible to this spot. These exercises help develop a high degree of proficiency, judgment and precision and are very helpful in improving standard pattern flying, as well as adding to your judgment in an emergency.