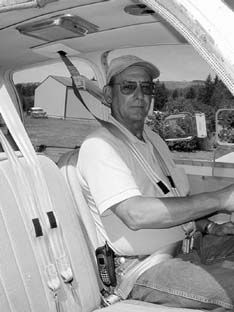 Played out time and again in crash-test videos and reflected in the gruesome aftermath of airplane accidents is an awful truth: Most pilots do not pay nearly enough attention to their seatbelts.

And by this were not simply referring to the pilots who have left buckles hanging outside their closed doors, making all kinds of racket banging against the fuselage in the time it takes the embarrassed pilot to come back for a landing. Were also talking about owners who fly 30-year-old airplanes that sport nylon belts that are frayed and faded ghosts of the original equipment. And the owners who resist the notion of adding shoulder straps to their bird.

Talk to pilots who have crashed. Study the photographs of accident scenes taken by investigators. One thing becomes clear: Your chances are good of having GARMIN stamped in mirror image on your forehead. In accidents, the yokes and panels stop far too many heads and chests. In an airplane, as in a car, seatbelts can save lives.

The airplane doesnt even have to be moving. A friend was strapped into the left seat of his Lake Amphibian when it exploded as he tried to start the engine. The floorboard from the rear seat hit him in the back of the head hard enough that he shattered several teeth on the panel. He was wearing his shoulder harness at the time.

Clearly there are three factors that influence how capable your seatbelts are at preventing serious injury in the event of an emergency: the design of the restraint system, the materials used in it, and the occupants willingness to use the restraints correctly.

Design
Seatbelts, of course, have a direct effect on the survivability of any accident. During deceleration along the longitudinal axis, as in sitting in an airplane thats sliding to a stop against a tree or striking the ground nose first, the human body can take about 15 gs for a duration of 0.002 seconds without injuries if that person is wearing only a lap belt. Add a shoulder harness and tolerance increases to 45 gs for 0.1 second or 25 gs for 0.2 seconds.

That presumes the restraint is worn correctly, and most of the time they are not, particularly if the shoulder harness is a fixed type that does not have an inertial reel. If a fixed shoulder harness is adjusted properly, it is difficult to reach the panel or, for example, floor-mounted fuel selectors in many aircraft.

Your resistance to injury depends on a factor known as dynamic overshoot. Simply put, this results when your body is able to accelerate forward briefly before putting the seatbelt under tension. If you judge an impact imminent, or even possible, it works to your advantage to tighten the seatbelts as much as you can stand.

Stepping up from a shoulder harness is a shoulder harness equipped with an inertial reel. This allows the shoulder belt to extend and retract smoothly, yet lock tightly at the first sign of hard deceleration. The design dramatically enhances both comfort and safety, but is typically found only in relatively new airplanes.

Some harnesses up the ante from one shoulder belt to two. Four-point harnesses have the best potential for keeping you out of the instrument panel, and if the top two points are connected to an inertial reel so much the better.

Adding a crotch strap to make it a five-point harness may add some safety, depending on the seat design. If you are sitting up rather straight, as in a Cessna single or Bonanza, the chances of submarining under the lap belt are not particularly high if the lap belt is secured properly.

The Replacements
Aircraft supply houses such as Wag-Aero, Chief Aircraft and Aircraft Spruce & Specialty Co. feature listings of FAA-certified seat belts and shoulder harnesses that allow you to replace existing belts for $100 to $200 per seat.

The replacements include new attach hardware, webbing and buckles. In some cases, these products will enable you to replace a seatbelt/shoulder harness combination with a four-point harness by running two shoulder belts off of the existing shoulder belt attach point.

However, adding these Y-type harnesses to airplanes that are equipped only with lap belts involves a layer of complexity because there is no approved spot to attach the top of the harness to the airframe. In that case, you will need to get a form 337, satisfying the FSDO that the spot you have chosen as an anchor point is strong enough to serve that role. The other method is to buy a supplemental type certificate, if available, from someone who has already done that testing.

Some airplanes with shoulder harnesses are also problematical because the shoulder harness attaches to one side. Adding the Y-type harness may result in an uncomfortable fit.

So why replace them at all?

A common cause of preventable injuries is from seatbelts that have outlived their usefulness. A check of that huge bubble of airplanes built in the mid to late 1970s shows that most have problems with cracked plastic panels inside the airplane. Clearly plastic nearing its 30th birthday is past its prime.

However, it seems those same airplanes are more likely to have the original seatbelts in them than the original panels. Seatbelt experts recommend that the belts themselves be replaced every seven years or so. The interval should be shorter in aircraft that are parked outside and therefore subject to ultraviolet degradation and those seats that get a lot of wear from being continuously adjusted.

At less than $100 per seat, rewebbing seatbelts is relatively cheap, providing the latching hardware is in good condition. Replacing the mounts and other hardware, at under $200 per seat, is a do-it-yourself job using materials easily available from an aviation supply house. Just make sure you use approved hardware rather than bolts from Home Depot.

However, rewebbing isnt enough if the airplane is equipped with only lap belts. Adding shoulder belts, while not cheap, can substantially increase the safety of front seat occupants.

Most airplanes have at least one supplemental type certificate on file for adding shoulder harnesses. However, the FAAs STC registry does not track what happens to the STC owner after approval, so tracking down the owner can be something of a crap shoot.

Owners of some airplanes can add modern four-point harnesses with inertial reels. The kits arent cheap – about $1,000 per seat plus installation of three to 15 hours – but that consideration will vanish if your face is headed toward the panel.

B.A.S. Inc., an aircraft modifier in Eatonville, Wash., has obtained supplemental type certificates to install them on Cessna singles, Beech Bonanzas and Barons, and other airplanes. The company is developing or has applied for approvals for Pipers Cherokee line, the bigger PA-32 series, Cessna 310 and 320s.

Installation involves dropping the headliner and mounting the inertial reel to the overhead airplane structure – a feat complicated in Mooneys and Grummans by the airframe design, according to B.A.S. owner Bud Blanchard.

Adding the harnesses makes the most sense during an interior refurbishment, since the bulk of the labor is in removing and replacing the headliner in most airplanes. In some models the shoulder harness goes down the back of the seat and attaches to the seat frame, which is a less-than-ideal design.

Use
Seatbelts are of little help if theyre not used properly. Proper tightening is important, but so are other factors.

Ensuring the seat is locked into position helps ensure it – and you – stay in place. Make sure passengers wear the belts, properly fastened, and that they know how to unbuckle them in case of an accident. This is particularly important if the buckles in your airplane are not styled similar to a car or commercial airliner – such as those found in some gliders and sport planes.

Make sure passengers wear them while underway. The bumpy air common at low altitudes in the summer, for example, can lead to injuries. We think its OK for passengers to loosen the belts slightly during cruise, as long as they tighten them again for landing.

Recall that a seatbelt briefing is required before takeoff and landing. That may seem kind of dorky, but proper restraint is more critical in an airplane than even an automobile.

Cars have a relatively massive structure and generally are not going as fast as airplanes during any given accident. In addition, most cars are designed with crumple zones that ensure the structure of the car absorbs as much energy as possible before the cabin is penetrated.

Airplanes have no such advantage. The relatively light structure easily deforms inward. The higher speed means the airplane has more energy to send toward the occupants as well. In addition, the cabin of most light planes contains enough sharp edges and exposed metal to make the Rambler designers cringe.

The result is that the cabin of an airplane is more likely to be penetrated by wreckage or external items like tree branches or fence posts than is an automobile. That means proper restraint is more important in airplanes as it helps minimize what rescuers euphemistically call wreckage entanglement.

Pilots can help ensure the survival of their passengers by outfitting the airplane with the best seatbelts they can, demanding passengers use them properly, and being prepared to fly the airplane all the way to a stop should the unthinkable occur.

Also With This Article
“Airbags for Airplanes”