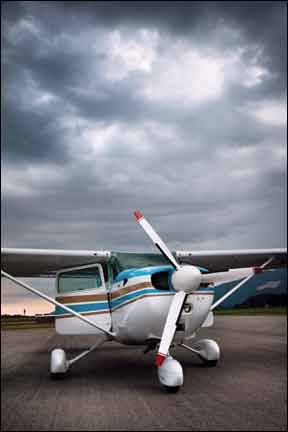 Here in the Northern Hemisphere, were firmly in the season of the bumps, when the suns angle and proximity help contribute to significant swings of weather. Many a high-temperature record fell well before summers “official” entry on June 21, as late spring served up conditions more often associated with the dog days of summer. Pilots debate which season treats them worse, but my vote goes consistently to summer. Confirmation and justification come again and again by way of accident reports detailing how a pilot lost a tussle with the seasons inclement weather.

Yes, winter brings snow, freezing rain, wet fronts and frigid-dry Canadian air, plus gusty winds alternating with cloud-bound ice. But that kind of activity scares off many pilots: Summer is the season when most of our flying activity occurs. The seasons much warmer temperatures-at least when compared to winter-wreak havoc in other ways, too. Theres our most-common nemesis, density altitude, which can impact both machine and operator. Summertime also brings with it haze, smoke and other obscurations, reducing our visibility while distorting how we perceive things around us. Lets examine the top threats and some common-sense countermeasures to help defeat the heat-well, at least the spawn of that heat.

On a clear day, you can see forever, so the saying goes. But truly clear summer days are rare to non-existent in many parts of the country. The causes vary: humidity and haze, smoke, dust…and more haze are the main culprits. One of the reasons for these visibility limitations is obvious: Summers hot winds contribute to evaporation and drying, which in turn promote erosion and dust.

Arguably the worst of combination all is hot-and-humid, which contributes to two phenomena: bodily discomfort-no evaporation, so we stay sticky to the point of becoming sweat-soaked-and haze, a product of microscopic water droplets in the atmosphere illuminated by sunlight.

Hot-and-sticky conditions at the surface can have a nasty habit of staying with us up to altitude. And those tiny moisture particles may also contain dust particles, further compounding the impenetrability of haze. The view can become ugly enough to put a pilot on the gauges, staring into the inside of the eggshell, with no horizon visible, on an otherwise clear day.

Several hedges exist against these summertime blues. The first one is a no-brainer: avoidance. Flight Service should know of any smoky areas, thanks to helpful (hint, hint!) pilots who provide pilot reports on them. Flying into an area polluted by the smoke of any fire does no good for you, your engine or vacuum/pressure-driven gyro system filters.

Also, smoke isnt healthy to breathe, even at altitude, and can mean uncomfortable moments trying to identify its source in the cabin. Finally, haze and smoke both contribute to not only reduced visibility but also altered depth perception, making objects appear closer than they really are. Area and terminal forecasts typically warn of haze, smoke, or any other obstruction to visibility-fog, rain, you name it.

Fly at night and you typically enjoy cooler, smoother conditions; though it still reduces visibility at night, haze presents less impact, since theres no sun to create blinding glare. Another way out of summers reduced visibility is to climb as high as operationally feasible. Most personal airplanes are capable of getting enough altitude to rise above the haze layer, where the air is cooler and cleaner, and greater in-flight visibility means you can spot looming thunderstorms when theyre much farther away.

Flying any summer trip between the late morning and sunset holds the best prospects of encountering turbulence. On the other hand, an early morning departure lets you enjoy a rising-sun view-and avoid the heat and bumps of later in the day, plus any additional risk from flying at night.

But the most common way heat and humidity foul us up is our old friend density altitude, or DA. There should be nothing new to tell you about DA you havent heard dozens of times before. The problem is we see a number of accidents and incidents each summer in which DA is either a known or suspected factor. So, to refresh ourselves, a definition: Density altitude is the altitude at which the airplane feels its flying, corrected for field elevation (or indicated altitude), barometric pressure, temperature and humidity.

Aircraft performance deteriorates as DA increases, its that simple. Yes, DA even affects turbocharged and turbonormalized airplanes-the engine may not feel a high DA, but we guarantee the flying surfaces do. Here are a couple of fresh examples.

A recent work project sent me to the Reno-Stead Airport in Reno, Nev., where the field elevation stands at 5050 feet msl. Humidity remained down in single-digit territory-well below-while daily highs barely broke 80 deg. F. It never really felt hot and high, but running the data through a calculator said otherwise. The results I received had daily readings approaching 8000 feet-almost 3000 feet above ground.

Closer to home, a recent weekend flight to a private strip also illustrated the difference between actual and density altitude-something that gets extreme even down in the flatlands of south-central Kansas. Checking before departure and arrival at my favorite hang-out airport, Dead Cow International (aka Westport/71K), revealed DAs exceeding 4800 msl at an airport sitting a mere 1290 above sea level. Throw in only 2500 feet of runway to work with-less when landing Runway 17-and you should be able to guess the departure solution for a pilot whose plane needs 2000 feet on a standard day: Go early-or really, really late-or suffer for the mistake.

With few exceptions, waiting out or moving earlier may be the only avoidance maneuver needed when facing any of these conditions. High winds abate-usually within a couple of hours of a storm, or a day or so after a front passage. Haze and high DA can both be combated by flying at night. Additionally, turbulence usually subsides when the sun goes down, making for a smoother, more comfortable ride for us and our passengers. That reduces the fatigue we can experience by being jostled around the cockpit for a few hours.

Da affects the engine, too

You know this, too, but it also bears repeating: High DA treats us to longer takeoff runs, higher liftoff groundspeeds, weaker climb rates and thinner margins for error. On landing, the higher touchdown groundspeeds can easily lead to a runway overrun. And even with lots of runway, the engine will still lack the gusto it normally has.

Which brings up a pet peeve, the old-wives tales preaching, “Never lean on the ground!” and, “Never lean below 3000 feet!” You can adhere to that admonition, as long as you dont mind leaving behind a bunch of horsepower because youre running the engine excessively rich.

Think about this for a moment: When the DA calculation comes out above 3001 msl, youre already above that 3000-foot threshold; the engine cant make power like its on “the ground” on a standard day and the excess fuel is actually reducing power at the prop. So, on the run-up, lean enough to get a 100-125 rpm rise with a fixed-pitch prop, then edge it back in a tiny bit. With a constant-speed prop, lean to the appropriate takeoff fuel flow for your density altitude, or use that fancy engine monitor you installed at the last annual. Then, when you go, youll be as close as you can be to making full power for the takeoff and climb.

Of course, haze, humidity and high temperatures arent the only features summertime offers. Theres also the thunderstorm. You know enough not to fly through one, but did you also know they can produce lightning miles away? Out ahead of the main system and on the fading side, lightning strikes can come 20 or more miles from any cloud formation making light or noise-rain or not.

This means you can be sailing along in VMC, looking at one of these systems forming ahead of you, with a clear view beneath and miles to go before you get to it, when a true bolt out of the blue plugs your aircraft into Mother Natures special electrical grid. The risks are well documented-to your radios, electronic panel equipment, electronic ignition (but not so much old-fashioned mags), as well as the airframe.

Weather experts recommend giving such systems lots and lots of space-50 miles isnt excessive; 30 miles is a good rule of thumb; fewer than 20 miles, and youre too close. If you cant avoid getting that close, consider finding an airport still in the clear and get down, preferably someplace where you can shove the airplane into a hangar.

Of gusts, fronts and gust-fronts

One of Mother Natures longest-held secrets came to light in the past year: how dying, collapsing thunderstorms cause powerful winds out ahead of them. These gust fronts generally dont provide much warning-and theyre no fun to ride. Consider the prospect of wind changes, gusts and directional alterations when landing or launching near a front-or on the back side of a storm just passed. You may also want to re-think any plans of trying to escape a rapidly approaching storm to avoid having to wait it out.

Sudden direction and velocity shifts accompany dying and forming storms have produced truly rocky results for aircraft caught close to the ground when the winds strike. Such gust fronts have caught more than one pilot just high enough to hurt coming down.

Steering clear of thunderstorms-even when theyre in the clear-provides distance as an insulator against a lightning strike.

Putting It All Together

Armed with the foregoing reminders on summertimes challenges, a reminder: Few things are more available these days than good weather information, so theres no reason any pilot should ever launch without full knowledge of current conditions and forecasts all along the planned route.

But not all weather sources are created equal. The local newspaper or cable news channel really is good only for big-picture stuff, like the location and forecast movement of fronts throughout the day, Between Duats, Flight Service, XM Wx and more, the savvy pilot should be well-versed on conditions expected throughout the day and into the next.

But a good preflight briefing isnt enough; you also need to stay on top of developments throughout the day. That means putting in some effort to radio Flight Watch or obtain a new standard briefing at your fuel stop. While airborne, pay close attention to Center Weather Advisories and whatever ATC may say about Airmets, Sigmets and Convective Sigmets, all of which focus on the most severe conditions and worst expectations. No pilot should ever say, “I didnt expect that,” after stumbling into something unforecast.

With all that in mind, go have a great, safe summer of flying. Just remember the greater chance for visibility restrictions and the effects high temperatures can have on performance. And stay away from thunderstorms.

Dave Higdon is a professional aviation writer/photographer with several thousand hours of flight time in hang gliders, ultralights and airplanes.