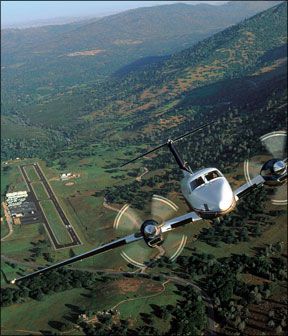 The number of our landings must always equal our takeoffs, or so goes the old adage. But sometimes the safest way to ensure equality is to do neither. Unlike birds possessing the gift of flight and whose skills are instinctive, we have the hard-won gift of thought. We earn our skills through repetition and reason.

Yet, it is precisely the former of these-repetition-which sometimes can work against us. I am thinking here about expectations (with apologies to Charles Dickens) and, in particular, those affecting us while were still on the ground.

Landings, as the old saw says, are mandatory, but takeoffs are optional (or to be a bit more direct, they should be).

Of course, in discussing our prospects on the ground, what I really mean is while were still on the ground, but expecting soon not to be. Also working against us is that were a pre-selected, self-motivated, goal-oriented group, and we generally really want to succeed at everything we do. Still, most of us dont do night carrier landings, possess finely honed reflexes or a “zero-defects” body. Instead, we often substitute innate skills with a strong resolve bred from confidence and experience, where a “can-do” mind-set often is among the most important of attributes.

More than my own personal whimsy draws me to wonder however, when a “can-do” attitude really ought to be “might do.” Yes, we do run-ups, but sometimes, that just might not be enough. Ultimately, we “expect” the ensuing takeoff will be a smooth one-the hundred or more before it were, werent they?

To illustrate the expectancy issue, let me recount one particularly profound insight handed to me on a silver platter when I was flying with a local flight instructor some years ago. Grumbling when he heard the pilot in front of us announce his landing would be a full stop, the question my cantankerous cockpit companion asked out loud was: “Oh yeah? How does he know?”

The clear implication: Suppose the brakes fail? Suppose hes a student and his CFI tells him to go around while in the flare? The same thing applies all the more when the pilot in front of you announces a touch-and-go, so you relax a bit and start “tailgating” on final. Well, the dangers of assumption are equally true, if not more so, when we prepare to take off.

In general, a pilots first regular and consistent indoctrination on the subject of takeoff expectancy usually occurs during multiengine training. (Yes, a conscientious CFI should expose their single-engine students to “what-if” scenarios during initial training, but regularly teaching students to be pleasantly surprised when things dont go wrong isnt usually the way its done.)

Part of learning to fly twins involves being coached about selecting a go/no-go decision speed, as well as how to safely abort a takeoff-in other words, thinking ahead about what you would do if things dont go according to plan. But most of us fly smaller airplanes, for which the concept of a “balanced field” is usually irrelevant. Balanced field length concerns engine failure situations for larger aircraft, and is the runway length where, for a given gross weight, elevation and takeoff configuration, “accelerate-stop” distance and “accelerate-go” distances are the same.

In Transport category aircraft, if an engine failure occurs below a critical takeoff “decision” speed known as V

1, employing the balanced-field concept allows the pilot to close the throttles, stand on the brakes, deploy spoilers, apply reverse thrust-although this last item isnt always included in the definition-and still stop on the runway. If an engine failure occurs at V1 and the takeoff is continued, the aircraft is able to climb to 35 feet by the end of the runway.

Thats for a field thats “balanced.” For most of us who arent bush pilots and who usually have plenty of runway left, we still wont have an abundance of time before its too late to change our minds. This is in stark contrast to most other phases of flight, which allow time for careful thought and decision-making.

Ideally, we should all emulate the takeoff procedures used in Transport category aircraft by spending a moment or two before takeoff reviewing what to do if an abort becomes necessary. While continuing the takeoff in a single-engine airplane after an engine failure is academic, a pilot can still encounter situations where aborting the takeoff is the best option.

The apotheosis of such “Pop Goes the Weasel” scenarios is of course the infamous “popped door” or, as in numerous documented cases, an unusual vibration or noise, poor acceleration, or even problems with directional control. After so many uneventful takeoffs, we lose sight of the possibility that something might stick a proverbial foot out in front of us and-being largely creatures of habit-were programmed to keep going.

Of course, even airline pilots arent perfect. One example is the well-known Air Florida Flight 90 accident (see sidebar on page 21). Other examples occurred where the benefits of numerous simulator rehearsals were wasted and where conviction prevailed even in the face of evidence to the contrary (such as incorrectly selected trim or flaps) and trained crews failed to respond properly. But these represent a tiny minority, and general aviation has far more. In each case, the pilot probably expected a normal departure without reviewing the alternatives.

A healthy suspicion for potential trouble, combined with well-practiced and decisive responses, help assure a successful outcome in any emergency. According to the AOPA Air Safety Foundation, the vast majority of takeoff problems are caused by poor preflight inspections (another reason not to hurry your preflight!).

This kind of “suspicion extinction” mind-set is natural: Every other time weve lined up on the runway and advanced the power, everything has always gone well. Until the one time it doesnt.

Handling What Comes Next

Earlier, I mentioned that having done a run-up may not be enough. The issue isnt how revealing is a magneto check at 1700 rpm versus the actual full-throttle takeoff. Rather, it is this: Even though everything checks out in the run-up area, that doesnt mean a rejected takeoff is no longer a possibility. Problems resulting from the way we handle whatever comes next may present more complications.

Also, many incidents involve something developing over an interval of time (even if it is only a few seconds), rather than happening instantaneously, so realization and the need for action may be less obvious.

An abort done even before the airspeeds alive is no big deal; control isnt an issue, and you just slow down and exit the runway at the next turnoff. However, a high-speed abort is another matter. In our favor is that it usually takes a greater distance to accelerate to a particular airspeed then it does to stop from that same velocity. But you may already be up in the air and have to suddenly switch gears from takeoff mode to landing mode. Every second theres more and more “runway behind you” and a high-speed abort, even if youre still on the runway, requires a high-speed decision to turn a pessimistic suspicion into decisive action. If the runway is wet or otherwise contaminated, it becomes even more critical.

A Boeing study found about of all rejected takeoffs were made at relatively low speeds (80 knots, which for a transport category aircraft is slow) and only two percent occurred above 120 knots, but these were the ones that resulted in incidents and accidents. But an abort itself can present its own set of problems, and you can wind up going from the frying pan into the fire.

The take-home point is all about complacency. Always think, “What if…” every time you start your takeoff roll. You never know when that Jack-in-the-box might pop out at you. Or, to put it another way, if the music stops, dont be left without a chair.