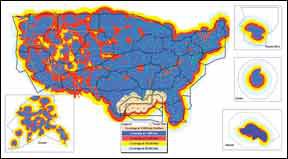 For the time being, a Mode C transponder is your key to regularly accessing Class A, Class B, TFR and ADIZ airspace. Under most circumstances, losing altitude squawk capability means ATC isnt going to let you into those places, although you can continue flying elsewhere. Thats one reason many operators have installed a second, back-up Mode C transponder, in case the primary box fails. But that Mode C transponder is destined to be supplemented by-maybe replaced by-the FAAs new air-traffic surveillance system, ADS-B, or automatic dependent surveillance-broadcast. As plans currently stand, well all need this technology installed in our aircraft to access various airspace types by 2020, when the FAAs final rule

mandates the latest and greatest ATC system, NextGen, is implemented. Putting aside the new systems relative merits and implementation timetable, the time will come when at least ADS-B Out equipment will be required for a lot of places we want to go.

Choices for fulfilling this mandate are slowly, steadily growing in number, as are the variations on how to fulfill the mandate. And theres the rub: A multiple-brand package approach may leave you and your aircraft vulnerable to grounding, thanks to failure of a single component which, otherwise, wouldnt present such a penalty. The problem? Unlike with a relatively simple and inexpensive transponder, the price for redundancy could go way up.

The ATC systems evolution over the years is a topic for another day, but its easy to point to various events-generally, unpleasant ones-which resulted in new rules and equipment requirements. After the June 1978 mid-air collision between a Cessna 172 and a Pacific Southwest Airlines Boeing 727 over San Diego, Calif., Mode A transponders became mandatory for general aviation aircraft in and around Class B airspace, even in VFR conditions. Mode C didnt become mandatory until a second SoCal mid-air, this one on August 31, 1986, when an AeroMexico DC-9 and a Piper Archer collided inside what was then the LAX TCA.

With the addition of Mode C requirements, ATC radar systems finally were able to track location, altitude and-with some computer assistance-direction of flight and speed. The system has held up pretty well, but is losing ground to a world filled with more and more aircraft flying “off airways” and using some form of area navigation. Existing surveillance systems-ground-based radar-suffer from various issues: the rate of antenna rotation, computer processing speed and its own rather coarse resolution. To handle more traffic, the FAA and airlines want ADS-B so they can, ultimately, reduce separation standards and marginally improve airport acceptance rates in even the worst weather.

Put simply, ADS-B works by continuously broadcasting an aircrafts position, altitude, speed, vertical speed and direction of flight. The FAAs ground network receives the broadcasts and routes the data through a processing station to controllers screens in near-real-time. With the right equipment-ADS-B In-aircraft so equipped can see the same data, but ADS-B In is an option as yet without a TSO. The rub comes when we realize ADS-B Out wont be an option in a few years. The table at the upper right details where ADS-B Out will be required by 2020, if current plans stand.

The ADS-B Out broadcast unit must meet TSO-C154c or -C166b, covering (respectively) the 978 MHz Universal Access Transceiver (978 UAT) or 1090ES, the 1090 MHz transponder broadcasting an Extended Squitter that carries all the position-source generated data. Either technology must broadcast current data once a second; what the controller sees updates every five seconds, the same rate as todays radar.

The data source required per TSO-C195 does not specify WAAS GPS a standard to meet, a standard which currently covers any one of four different sources, WAAS among them. Position Sources interfaced to the ADS-B Out system must meet TSO-C129, TSO-C145a, TSO-C146a, or, ideally, TSO-C196 or another demonstrated equivalent. How an ADS-B Out system is assembled can make a difference between a failure grounding you and one merely forcing you into a different navigation mode.

That IFR-approved GPS presently in your panel may qualify, even if its one of the older TSO-C129 (non-WAAS) units. A new, current-TSO WAAS-equipped GPS navigator absolutely qualifies. Connect that WAAS GPS to the selected broadcast source-1090ES if you plan to fly above FL180-connect the altitude source, turn on the transmitter and get it signed off. Youre done and ready to be seen by ATC. Well, maybe.

What if something happens to that WAAS GPS? Or the antenna? Or one of the WAAS satellites? Or enough of the main GPS constellation to degrade position accuracy at the receiver? The transmitter and altitude source still work, but youre not going anywhere other than in Class D and Class E airspace, and not even Class E if it means flying above 10,000 msl.

Yeah, you can still navigate by a non-connected GPS, still talk to ATC and try weaving your way somewhere through strips of Class E and land at Class D airports. Good luck with that.

Similarly, you can lose that altitude source and youre stuck, again, unable to access those same airspace sectors because ADS-B depends on the pressure altitude to deliver a complete data package to the ground network, sort of like trying to access Washington, D.C., Special Flight Rules Area without Mode C. It aint happening.

Need to go IFR? Well, youre grounded. And lose the 1090ES (or 978 UAT) link and, even though youve got GPS/position data and an altitude source, its still a no-go, since ATC wont be able to see you in much of the country. Yes, plenty of ILS systems will still be around; ditto for the dwindling number of VOR transmitters-for a while, anyway.

Of three possible equipment configurations available to meet the ADS-B Out mandate, say shops and OEM representatives, none are completely failsafe, but one is fault tolerant: the self-contained solution.

The key, according to some avionics-industry insiders, is a system constructed with its own separate position source and a transmitter with integral altitude encoding. The WAAS GPS necessary is little more than a card which, when powered up, listens to the satellites almanacs and, once up-to-date, generates a blind output of position, speed, vertical status and flight direction wholly independent of control and not part of the panel navigator. Add a solid-state pressure transducer and the transmitter box also can produce its own altitude encoding, completing the circle. An increasing variety of Mode S/1090ES transponders are equipped with their own integral altitude sensor and reporter.

Sure, some of these boxes may also interface with a standalone WAAS navigator, so that a failure of one source still leaves you with a second; maybe so for a solitary altitude encoder or the pass-through from one. But you wont be able to navigate through the covered airspace sectors even VFR.

Equipment exists that takes out of the picture the Mode S-and Mode C-transponder: the 978 MHz Universal Access Transceiver. As the name implies, the UAT receives and transmits, but the 978 UAT option is, however, still dependent on the same data inputs for position and altitude. Options exist for incorporating the WAAS GPS engine into the 978 UAT, eliminating the need to add a WAAS navigator solely for ADS-B Out compliance. Those devices originally met an earlier TSO, but expect them to be upgradable to TSO-154c.

These solutions also generally need an input control so the pilot can enter an aircraft identifier. This can be a transponder, and Mode S transponders are available with integral altitude reporting. That input requirement, absent integration, still leaves the aircraft dependent on three components-the failure of any one means youre grounded.

Well, avionics experts note were early in the process and plenty of new products are expected to fulfill the need-in a couple more years. And those may include an all-integrated, sole-source package with a transmitter, WAAS GPS sensor and an altitude sensor-with the ability to use a panel-mounted WAAS navigator as an alternative.

So, unless youre in a rush, sit back, have another beverage and wait. Better solutions are expected.

Dave Higdon is a professional aviation writer/photographer with several thousand hours of flight time in hang gliders, ultralights and airplanes.