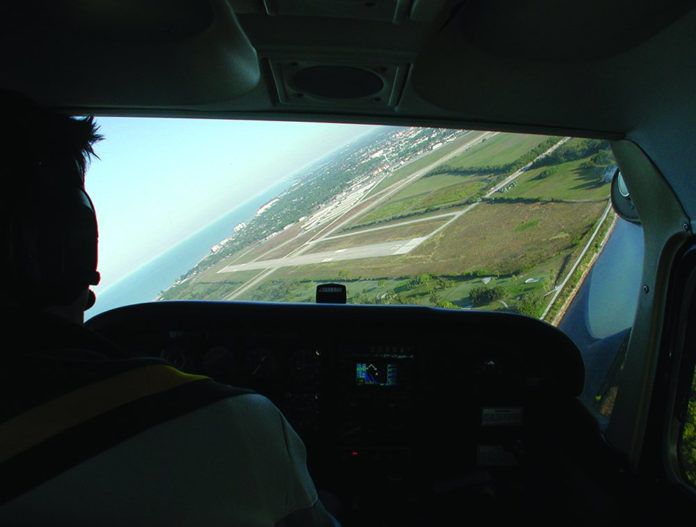 This magazine often has discussed the so-called impossible turn: returning to the departure runway and landing downwind after an engine failure during takeoff. Our view of the impossible turn is that it is possible, but only with practice, sufficient altitude and some luck. Generally, executing a forced landing straight ahead is preferable to attempting a steeply banked turn at low altitude. This is especially true without engine power or sufficient airspeed above the wing’s stalling angle of attack to enable the steep turn.

One problem with trying to return to the departure runway in such an event is the inevitable delay in accepting the engine failure and making the decision to attempt the maneuver. Precious seconds and energy are lost while the pilot processes the situation and decides how to respond. By then, the airplane is even further away from the runway, and perhaps even lower and slower.

Another problem is the maneuver generally requires two turns. The first one, of approximately 270 degrees, reverses course and places the airplane flying roughly at a right angle to the departure runway. The second turn, of approximately 90 degrees and in a direction opposite the first turn, is necessary to align with the runway and complete the approach. That’s a lot of maneuvering close to the ground, with engine power and the energy afforded by altitude and airspeed all in short supply.

The situation changes if the power failure is only a partial one. Sufficient power may be available to maneuver the airplane back to the departure runway on a reciprocal heading. Enough power also may be available to fly the traffic pattern and land somewhat normally. It depends, and the pilot’s decision on what to do is the definition of a judgment call. In any case, care must be taken to handle the airplane gently and prevent losing control. It’s easy to imagine a pilot trying to stretch a glide or turning too steeply. The result too often is a stall/spin from which there’s not enough altitude to recover. Here’s an example of exactly that kind of loss of control.

On February 17, 2014, at about 1250 Eastern time, an experimental, amateur-built Sonex collided with terrain in West Palm Beach, Fla., shortly after takeoff. The solo airline transport pilot/owner was fatally injured and the airplane was destroyed. Visual conditions prevailed.

Witnesses stated the engine “back-fired” and made a “sputtering” sound during initial climb. The pilot entered a steep 180-degree turn back toward the airport. The airplane then stalled and entered a nose-down spiral, descending into a canal. The NTSB’s records on exactly where the airplane came to rest are ambiguous. One graphic shows the airplane flying a downwind leg toward the runway’s approach end, with the accident site in a location from which a close-in turn to the base leg might be performed. Other data depict the accident site as being off the end of the same runway, at approximately the location where a pilot would roll out of a 180-degree left turn.

The wreckage was located partially submerged in a body of fresh water. All major components of the airplane were accounted for at the accident site. Control continuity was traced from the cockpit to the elevators and ailerons, and to the rudder control horn. There was no evidence of pre-impact mechanical malfunction of the flight control system.

Examination of the engine revealed the top spark plug on cylinder #1 was not seated in the cylinder head; it only was finger-tight within the cylinder head threads. The crankshaft was rotated freely by hand. Engine valve train continuity and thumb compression was observed on all cylinders. The propeller remained attached to the hub, which was attached to the crankshaft. One blade of the wooden propeller was splintered. The other propeller blade displayed span-wise cracks across its forward face.

The airplane was equipped with an electronic flight instrument system (EFIS) capable of recording primary flight information, GPS position and engine monitor data. Review of the data revealed all engine parameters were normal during the initial climb. Then the #1 cylinder head and exhaust gas temperatures dropped approximately 100 degrees F, followed by a loss in rpm and a loss in airspeed. The recorded GPS data then showed the airplane making a banking left turn as described by witnesses.

With the benefit of hindsight, it’s easy to second-guess the pilot’s decision making. Attempting to fly the airplane with a known engine deficiency is one questionable decision, although its greater risk could be justified after extensive ground operation and examination of the stripped spark plug hole. We don’t know if that happened. Partial power apparently remained available, but the propeller’s post-accident condition argues the engine may have completely failed by impact.

Regardless of whether any engine power was available, the record is clear that the pilot banked steeply in an attempt to return to the runway, either from the opposite direction or by flying a traffic pattern. And that’s when the loss of control occurred.