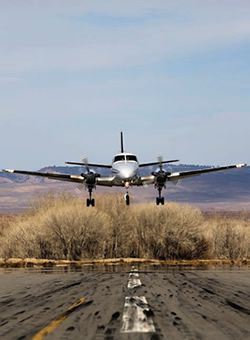 You wouldn’t think that two common landing-phase accidents at opposite ends of the runway would have same root cause and the same corrective technique. Landing short (impacting terrain or obstacles just prior to the runway) and landing long (touching down at a point where the aircraft cannot be stopped before running off the end of the runway) account for six percent of all landing accidents, according to AOPA’s Air Safety Institute. Remove loss of directional control on the runway from the picture, plus touchdowns prior to the runway, and those extending beyond the far end of the landing surface account for almost one-fifth of the remaining reports.

But both problems can be addressed with a common cure: Correctly choosing and using a runway aiming point.

Landing long is a function of two things: your aiming point, where you’re looking (and pointing the airplane) while on final approach, plus airspeed control. Your aiming point is a spot on the runway where you want to touch down. It can be the numbers, the orange dot, the third stripe, the 500-foot marker or something else. Select and visualize the aiming point when you enter the visual pattern, whether downwind, on base or final. After that, all maneuvering should be designed with the aiming point in mind, ideally so that if a powerplant fails, you still can reach it in a power-off glide (we strongly recommend a full, downwind pattern at non-towered airports.

Sometimes, of course, we don’t have the luxury of picking an aiming point from pattern altitude. One example is breaking out into VMC from an instrument approach. But we still can pick an aiming point—the third stripe usually works well for us—and use it to manage your approach. As you glide down final, your aiming point should remain fixed in your windscreen—it’s the point at which you’d collide with the ground if you do nothing to alter your trajectory.

See the sidebar on the opposite page for more on picking and using an aiming point.

Aiming for the right spot won’t help much if you’re too fast on the approach. If you’re “coming in hot,” as soon as you try to arrest your descent, you’ll begin to float further and further past your aim point. You’ll bust your checkride for sure and if you’re doing this for real, you just might bend your airplane (or worse).

For any landing, a stabilized approach should be the objective. Many definitions of “stabilized approach” are out there, of course, depending on what’s being flown. Here’s ours: If you’re not in landing configuration and on the correct speed and glidepath as you cross the runway threshold, go around and set up for another try. Unless you’re on fire, there’s no need to continue this landing attempt. Instead, go around and come back for another look.

Likewise, if you begin your flare and the airplane floats until you pass the first half of the runway, or you do not have enough runway remaining from where you will touch down to safely stop, go around and do it right the next time.

Don’t try to “salvage” a bad approach, because that’s exactly what might result—with the airplane ending up in a salvage yard. Practice balked landings (go-arounds) so you’ll be ready, and make the decision before you touch down if you aren’t going to be able to land and safely stop in time.

Coming up short of the runway is usually the result of letting the speed deteriorate on final approach. This in turn results in a high angle of attack and excessive drag; the net result is a steep descent (possibly at a stabilized speed, possibly decelerating) in an attitude that will lead to even greater sink rate if the nose is pitched further up.

If you can’t see your landing spot through the windscreen (some tailwheel airplanes in a three-point attitude exempted), you probably need to lower the nose and add power to remain at a safe flying speed at an angle that takes you to the runway. If you can’t put the nose down and still avoid obstacles, call off the approach. Set power, pitch and configuration for a go-around and a chance to set up and try it again.

In extreme cases, you easily can be behind the power curve, or in the region of reversed command. You’ll need additional power while you lower the nose to increase airspeed and get back on the front side of the power/airspeed curve.

Precisely fly an electronic glidepath and chances are you won’t land short of the runway. But if you’re flying fast, there’s a good chance you may land long, off the far end. This is especially possible if the weather is at or just above minimums for the approach.

An instrument approach glidepath is designed to take the airplane to a touchdown zone 1000 feet or one-third of the total runway length from the landing threshold, whichever is less. Visual approach guidance is usually also set to take the arriving aircraft to this touchdown zone.

One of the real tricks to “going visual” at the end of an instrument approach is to remain on glidepath to the touchdown zone. Human factors research shows a great tendency in pilots to “dive for the runway” once they break out, and the fact the airplane is pointed not at the numbers but a touchdown zone some distance down the runway may make a pilot think he/she needs to steepen the descent to avoid overflying the runway, if landing at near-minimums visibility or ceiling.

When the weather’s good (or bad), practice staying on glidepath (visual if available; see sidebar) all the way to touchdown, not just to the missed approach point. Don’t automatically pull off power once you break out.

The long and the short

Landing short, landing long…each is a symptom of airspeed and glidepath control gone bad. In many airplanes, every additional five knots on final increases the distance to flare and land by 10 percent or more. Even a little below final approach speed, on the other hand, and rate of descent will increase, angling you short of the runway.

Your final approach check should include:

• On glidepath (electronic or visual, if available; to a touchdown point in the first third of the runway if not); and

• On centerline (aligned with the runway and compensating for any crosswind).

If you’re within 200 feet of the ground and any of these basic parameters is not as it should be, smoothly execute a go-around and set up to try again. Don’t try to “salvage” the landing—whether going long or coming up short, the fix is the same: reject the landing attempt and go around.

Criteria for rejecting a landing in a piston or light turbine airplane might include any one or more of these items:

• Airspeed below reference speed (50-foot landing speed in many Pilot’s Operating Handbooks) or more than 10 knots above reference speed within 500 feet of runway elevation.

• Failure to fully compensate for crosswind drift when passing the runway threshold.

• Touchdown will not occur within the first third of the runway or with less than a sufficient distance to land without using brakes (this latter criteria applies to very long runways and deliberately landing long on long runways).

If any one of these criteria occurs, reject the landing and set up for another approach, or divert to a different airport.

No one expects a runway overrun until it’s unavoidable. The trick is to avoid the unavoidable situation, by observing the rejected landing criteria and choosing to go around early in the process.

Likewise, salvation from undershooting the runway can be found with the same techniques, including proper use of an aiming point and ensuring airspeed and aircraft configuration are as desired.