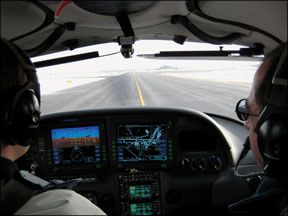 For a long time now, loss-of-control accidents in general aviation have been driven by relatively few but recurring causes pointing to fundamental problems in pilot training. These problems seem national in scope.

The NTSBs findings in two recent crashes illustrate the point. One was the fatal stall/spin of an American Champion Decathlon in Oroville, Calif., in October 2005; the other the much-reported crash of a Cirrus SR20 into a Manhattan apartment building in October 2006.

In both accidents-the Decathlon involving a high-time ATP, the Cirrus an 88-hour major league baseball player new to aviation-there were common threads. Both reveal systemic errors and omissions in our standard flight training.

Methodology, in my estimation. These two accidents vividly show that our training is deficient in teaching stall/spin awareness, cockpit resource management and risk analysis. Why cant we figure this out?

A catchall phrase, pilot error, is assigned either as a broad cause or a factor in upwards of 90 percent of general aviation accidents. But pilot error comes in two distinctly different flavors: tactical errors, which can be attributed directly to a pilots chosen behavior; and operational errors, which can be traced back to instructional errors or omissions committed during flight training.

Little usually can be done to eliminate tactical errors made by those who intentionally ignore safe flying practices. The foundation for operational errors, on the other hand, is laid and even reinforced during the transfer of knowledge between aviation educators and their pupils. So suppose that as a result of the aviation education system itself, the pilot never received the appropriate knowledge and skill to handle a particular situation? Or suppose as a result of the pilots training, the probability is near zero that the pilot can or will choose a suitable course of action? How can we then blame the pilot for committing the error?

Take the typical stall training conducted to satisfy the FAAs Practical Test Standards, for instance. The emphasis is placed on detailed procedures used to configure for, perform and exit a couple of specific types of stalls. Treated as an independent maneuver unto itself, the whole ordeal is often enveloped in unnecessary melodrama as well. The actual lessons learned, however, are fear and a false association between the stall and slow airspeed.

Consequently, the student granted private pilot privileges might then adopt what seems to be a perfectly reasonable strategy: fly a little faster to have greater margin against those scary stalls. More instances of flat-spotted or blown tires and burned-up brakes result during landing, as do cases where airplanes overrun seemingly short runways. Yet the blame is pinned on the educationally deprived pilots improper airspeed control and poor judgment. And rather than dealing with the underlying problem, some flight schools simply prohibit pilots from taking their high-performance rental airplanes to airports with runways shorter than 5000 feet.

The ubiquitous turn offers another prime example where at least one instructional error combined with the omission of critical pieces of information have led to their share of accidents. In the aftermath of the Manhattan crash, pundits in several aviation magazines analyzed how the turnaround should have or could have been done. Articles reacquainted readers with equations for turn radius, turn time and load factor. Canyon turns, crop duster turns, the use of flaps, even Immelmanns were bandied about.

The various takes on turn performance certainly served as good refreshers, if not excellent reminders that we need to be thinking ahead continuously vis–vis the surrounding environment, our piloting skills and the capabilities of our airplanes. The nub of the matter, however, was nowhere to be found.

The error: Too many students are taught that pitch controls altitude, power controls speed. The misassignment of these primary control functions is further reinforced when in the narrow slice of the operating envelope most pilots call home. Yet even though pitch-for-altitude may sometimes have the illusion of truth, it is contrary to the laws of aerodynamics (see “Pitch + Power = Performance,” March 2007) and will let you down in critical flight situations. Guaranteed.

The omissions: Early in the flight training process, educators are obliged to introduce the customary diagram showing the forces acting on an airplane during a turn. Student pilots learn the mantra, “Because of the horizontal component of lift” in response to the challenge, “Why do airplanes turn?” Instructions on how to perform a turn begin with, “First, you bank the airplane…” All well and good. And all true-to a point.

Consequently, pilots can cause rudimentary turns to happen without getting into too much trouble (and even pass a checkride); however, they lack the know-how to master turns in the general sense.

For instance, a favorite query of pilots who are established in a normal, level, coordinated turn is, “What control surface are you using right now to make this turn happen?” Without blinking, pilots overwhelmingly proclaim, “The ailerons!” Invited to have a look down the wing, however, they are dismayed to see the ailerons tucked in the neutral position.

The questioning continues: “Only two control surfaces left; which one are you using?” “The rudder,” usually comes the next, less confident reply. Invited to place their feet flat on the floor, pilots find that the rudder isnt doing anything either in our properly rigged mount. Again the question, “So what control are you using to make this turn happen?”

Reluctantly, some are forced into guessing that its the elevator; others wrack their brains, confused, refusing to believe that it could be the elevator. But that surface is the only one remaining. Invited now to make a series of smooth but exaggerated fore and aft movements with the stick/yoke proves the point: turn rates speed up and slow down; the airplane carves out transient climbing and descending turns; and upon finding just the right amount of pull again, the airplane settles back into steady, level turning.

The elevator. The turn control. Why isnt its role specifically identified and hammered home during training? Instead we talk obliquely about bank angle this, components of lift that, G-load here, changing stall speed there.

Banking an airplane tilts its lift vector away from the vertical, reducing the lift available just to main altitude. In order to offset the lift lost in this configuration, we must stretch its vector-grow it-so its vertical component once again equals the airplanes weight. We do this by pulling on the elevator. The horizontal component of lift will naturally increase as well, accelerating us into a turn.

Turning is the by-product of our manipulation of lift to offset weight. Of course, we routinely use numerous permutations of this phenomenon to our advantage.

We perceive the consequences of our elevator inputs as changes in airspeed, G-load and flight path. Balancing weight during a level, upright turn, for example, requires a specific G-load (i.e., pull) for a given bank angle: From a nearly imperceptible squeeze of aft elevator for the scant 1.15 Gs needed at 30 degrees of bank, to a more significant tug to generate and sustain the 2.0 Gs needed at 60 degrees of bank.

The elevator! Controller of so many things: angle of attack, airspeed, G-load, stalling, turning and whether or not we end up breaking the airplane, too. So fundamental, yet so often omitted during normal flight training.

The results: Perhaps its a little easier now to see how these errors and omissions might feed typical accidents. Take the skidded turn from base to final: The pilot, erroneously believing turns are controlled with the ailerons, rolls into a shallow bank. The airplane nonetheless manages to overshoot the centerline.

The same pilot was also once reprimanded, “Never exceed 30 degrees of bank in the pattern” without any further explanation. Stress-induced tunnel vision effectively blocks any thought of a go-around. With the ersatz aileron-as-turn-control taken away by decree, the pilot switches to what seems to be the next best way to turn back to the centerline- add more rudder. The nose of the airplane promptly slices down and away from the horizon in response. Reacting as if elevator controls altitude, the pilot struggles now to get the nose up by sliding the yoke aft. The skidding turn tightens, airspeed drops, G-load increases-angle of attack is definitely on the rise. The airplane stall/spins. The pilot gets blamed.

Take the 180-degree turnback to the runway as another example. Presume the engine quits shortly after takeoff. Influenced into believing that the runway behind is the best option and that the ailerons make the airplane turn, the pilot immediately banks rapidly and steeply. Sensing the rising rate of descent and with the misconception that elevator holds the airplane up, the pilot hauls the stick back. A stall/spin ensues.

The accident not involving an instructor instead involved an FAA inspector conducting a reexamination flight with a private pilot who previously had a landing accident. The inspector requested demonstration of a turnaround following a simulated engine out on takeoff. The inspector survived; the private pilot, trying to comply with the inspectors request, died.

Two of the narratives also mention successful turnaround attempts had been made prior to the accidents. Based on the reports, at least five turnaround attempts can be counted, with three successes and two failures. The failures accounted for two of those killed, the one serious injury, and the one minor injury in the mix of five turnback accidents.

A third narrative described how the first turnback attempt was aborted (i.e., it failed) in favor of a go-around. The control tower was then asked for, and granted, a second attempt. The second try failed too, ending in a stall/spin and two more fatalities. The combined turnaround success rate in these three cases was three out of seven, or 43 percent. This is less than the overall turnaround success rate measured during the course of the simulator turnback study (see page 7).

Interestingly, however, it happens to be the same rate tallied in the simulator study during the first three of the seven test sorties, where the exact turnaround technique was left up to the test subjects discretion. The penalty for failure in a real airplane close to the ground, of course, is far greater than it is in a simulator.

Its plenty dangerous to attempt a turnback, even in a supposedly controlled environment close to the ground, even though the attempt supposedly can be aborted at any time by leveling the wings, powering up, and going around. The danger during a real, surprise emergency is exponentially greater. Aviation educators who continue to promote and teach the 180-turnaround as a viable alternative-in the face of the data and historically sound advice to the contrary-put themselves and their students at grave risk. And for what? Maybe to save some metal and fabric? The problem here is the extremes: Either youll have resounding success, or youll die trying. Sadly, far too many have needlessly experienced the latter.

In subsequent articles, well explore some of the underlying reasons for these misunderstandings and what we can do about it.

Rich Stowell was designated the countrys first-ever Master Aerobatic Instructor in 2001 and was the FAA National CFI of the Year in 2006. His most recent book is “