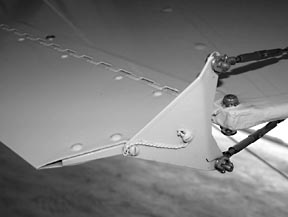 Primary training forms the foundation for a career of flying, but some of those early lessons instill habits that just wont work on other kinds of airplanes. Perhaps nowhere is this as evident as the habits developed by student pilots with respect to stalls. In the training environment, students learn the nose pitches down at the stall.

This misconception is primary bait that leads pilots into the stall/mush trap. In a stall/mush, aircraft performance is severely compromised by the stalled wing. However, the tail is not stalled so the nose doesnt pitch over in the classic stall warning sign that was taught during initial training.

Propwash
Propwash brings with it not only greater velocity airflow, but also more turbulence than the unaffected airflow outside of the aircrafts boundary layer. This effect is most noticeable at slow airspeeds and high power combinations, which partially explains the situation where most stall/mush accidents occur. While the airspeed indicator reads low, the speed of the airflow over the tail is much higher, creating a much stronger aerodynamic force the pilot can use to pitch or yaw the aircraft.

During power-on conditions, the propwash ensures the tail is flying effectively even though the wing is wallowing at a slow airspeed and high angle of attack.

A secondary effect of the high power condition is that the angle of attack of the tail surfaces is decidedly different than that of the wing. The propeller creates a strong airflow directly back toward the tail, which helps maintain a lesser overall angle of attack on the horizontal stabilizer, thus maintaining its effectiveness despite high angles of attack for the wing.

Another important effect comes from turbulence within the propwash. Research shows that, in small-scaled turbulent flow such as the pulses within the propwash, the airfoil can attain much higher angles of attack – on the order of 30 percent. In effect, if the empennage tail surfaces are enveloped by turbulent flow, they can sustain much higher angles of attack than the wing.

All of these combine to create a different airflow situation over the tail. As long as the tail is still flying while the wing is at or beyond the critical angle of attack, the aircraft will be stalled but may not pitch over.

Wing Wake and Downwash
The downwash from the wings may also be an important parameter in the nature of the airflow over the empennage. The location of the wing on the fuselage determines whether the effect will be substantial or minor.

This downwash affects the pitching moment of the aircraft. As the flaps are extended, the wings wake is directed downward more strongly, thus inducing more of a downward load on the tail. This partly explains the strong pitch-up tendency common in high-winged aircraft when the flaps are initially extended.

The contribution of the wing wake is very substantial in some flight regimes. The classic stall warning signs in some light aircraft may normally begin with a slight aircraft buffet, which is produced by the turbulent airflow of the wing impacting the empennage.

Flight testing reveals that the first signs of separated airflow in a high-winged airplane appear at the upper third of the vertical stabilizer, not on the horizontal stabilizer. From a practical flying point of view, this indicates that the wing approaches a fairly high angle of attack before the normal separated stall wake strikes the horizontal stabilizer, which provides the tail shaking commonly used as a stall warning in high winged aircraft.

Some aircraft, under certain power and high angle of attack conditions, can have such strong downwash on the tail surfaces that the nose will remain in a high pitched-up position, making it possible to become locked in a deep stall.

As the airplane approaches the ground, the downwash is unable to deflect downward because it is impeded by the solid surface of the ground. Due to the lessening of this downward deflection of the wings downwash, there is not as much of a downward force on the tail.

Flap extension produces the characteristic nose pitch-up, which if left uncorrected, can place the aircraft at a high angle of attack. On the backside of the power curve, the increase in drag will produce a corresponding increase in the sink rate. Some may react by pulling back on the elevator, which only further increases the power required of the aircraft.

The aircraft will exhibit a high sink rate, and maybe some buffeting, but never the abrupt pitch-over that many pilots recall from their primary training as a primary indicator of the stall. A high sink rate can be a very definite sign that the aircraft is far behind the power curve or at/near the stall, and thus must be recovered.

Recovery would involve a combination of appropriate and timely detection of the warning signs, followed by increasing power or decreasing drag as required. One caveat when it comes to removing flaps, however: In most airplanes, the best course is to retract flaps in increments. If you suddenly retract all of the flaps at once, you will certainly encounter what a real sinking feeling is like.

Go-arounds, especially with the trim set for the nose-up position of short final, continue to plague general aviation pilots, who somehow must feel go-arounds are something that doesnt need to be practiced.

Some pilots like to trim in the flare in order to lighten the stick forces and help them grease landings. Some aircraft manuals also specifically warn against trimming in the flare. This is patently a bad idea. If you trim out elevator forces in the flare, stick forces become excessively light and will not give you the feedback needed for precise inputs during the flare.

Trimming in the flare can also set the pilot up for excessive nose-up stick forces should the need arise to execute a go-around. Depending on the airplane, the nose-down stick force required to keep the airplane from overrotating and stalling can become very substantial – and comes at a time when the pilot must retain aircraft control by firmly holding the stick in a precise position.

Instead, what typically happens is that the aircraft controls the pilot. At this point, it should be obvious that by trimming the airplane nose-up in the flare, you will only compound your control problems during a go-around. The whole problem can be avoided by having the aircraft trimmed for the final approach speed and leaving the trim alone during the flare.

A special precaution must be exercised at high density altitudes when the aircraft is heavy or underpowered. Because the airplane produces less power than at sea level and the propeller loses efficiency, the aircraft has less thrust to accelerate.

Climb performance in the clean configuration can be anemic, and flaps can add enough drag that the airplane cant even maintain altitude at full throttle, much less climb. In the cases of approaches to fields at high density altitudes – and especially in aircraft with large flaps or with large flap deflections – full flap extension should be delayed until the runway is assured.

Takeoff Stall/Mush Traps
On takeoff, the pilot who prematurely rotates, over-rotates, or tries to climb at a relatively high pitch attitude is flying the aircraft at a high angle of attack. Any uncoordinated rudder deflection or failure to compensate for the propellers left yawing tendency is very effective at yawing the aircraft even more, which only induces more profile drag and further degrades the aircrafts performance.

At high angles of attack, the drag is much greater and places the aircraft on the back side of the power curve, otherwise known as the region of reverse command. Any small incremental increase in the angle of attack results in a large increase in drag. The pilot must decrease the drag on the aircraft in order for the aircraft to have any hope of accelerating.

There are a number of actions you can take to prevent this from happening. A thorough preflight evaluation of the takeoff environment – including winds, temperature, runway slope, downdrafts and other effects of the wind flowing around nearby obstacles- the condition of the aircraft and engine, and the loading conditions for takeoff will help you make critical decisions regarding the planned progress of the takeoff.

If the airport is at a high density altitude or the engine is old and tired, the pilot should expect sluggish acceleration. Also note that at high density altitudes, it will seem like the ground is passing by faster because it will be. Rely on the airspeed indicator for the proper airspeed rather than the look associated with your groundspeed. Rotating the aircraft early will simply induce so much drag that the aircraft may not be able to accelerate.

Actually the rotation speed will vary with aircraft weight. Lightly loaded aircraft will be able to take off at slower speeds and thus can be rotated at slower speeds. Conversely, heavily loaded aircraft require higher airspeeds to safely climb out, and thus require higher rotation speeds. Variations in aircraft weight will also affect the initial climb out. Not only will acceleration be slower in a heavier aircraft, but the aircraft will not climb with the same gusto as the lighter aircraft.

The pilot must resist the temptation to compensate for this loss of performance by increasing the pitch further. Under combinations of high density altitude, low power and heavy loads, the aircrafts ability to climb out of ground effect will be marginal. Upon reaching the end of ground effect, the small power margin the pilot has can be eroded by sloppy flying such as rough control usage, excessive control deflections, uncoordinated flying. Precision is important, especially so in such circumstances.

Remember the old saying, Prior Planning Prevents Poor Performance. It applies equally well to the prevention of the stall/mush traps. The problem with recovering from a classic stall/mush scenario is that you are so close to the ground that there is no margin for error. You have no altitude to trade for airspeed with which to begin accelerating the aircraft.

Once the aircraft enters into the classic stall/mush situation – such as trying to avoid an obstacle at the end of the runway – you literally have nowhere to go but the trees. Preventing of the situation from happening in the first place it the best solution.

A number of risk factors for takeoff should send up red flags in your mind. High density altitudes, heavy weights, or under-powered aircraft are classic factors. Adverse winds, short runways and obstacles add up the risk factors.

If you find yourself confronting several of these risk factors, consider lessening the load, waiting for cooler weather, waiting for favorable winds, and choosing a longer runway without obstacles. But in any case, pay attention to pitch and precise technique – and forget some of those lessons about stalls you learned long ago.

Pat Veillette is an aviation safety researcher who flies for a large airline.