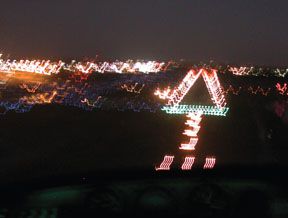 Few things are more satisfying to me than riding the ILS rails to a smooth landing after a lengthy flight in IMC. But preparation for that landing began long before the mains touch down. In fact, before just about every for-real approach I make, I still hear my double-Is admonition: Now, while youre flying straight and level, is a good time to get ready for the approach.

Among other things, his point was that a good approach usually results from good planning. Yes, Ive forgotten those words on occasion, and those results were good enough that I got down and could use the airplane again afterward. But thats not the way I like to fly. For-real approaches are like just about anything else in life: Theres a right way and a wrong way.While your right way may differ from mine, too many pilots still find ways to shoot an approach the wrong way every year. Lets take a look at five common traps for the unprepared.

Planning
Early planning for an approach always pays off. While still at cruising altitude, you should have already picked up the ATIS or AWOS and figured out which way your destination is landing. Even if you start down too far out to pick up the ATIS, your pre-flight and in-flight briefings should tell you what to expect; airports near your destination are probably experiencing the same surface winds, so its reasonable to use them, as a guide.

For some airports, theres only one choice of a suitable approach, Others may resemble a Chinese menu. Regardless, pick the one with the lowest minima and study the approach plate. Even this small chore can be a matter of employing the right way instead of the wrong one. I use what I call a building block method to planning the approach: First determine the transition youll likely use and how many turns youll make-and in which direction-before youre aligned with the final approach course. Once you have this picture in mind, its time to delve into the rest of the procedure.

Other important info at this stage is the final aproach course itself, the distance from the final approach fix to the runway and the decision height for an ILS or minimum descent altitude for a non-precision approach. Nows a good time to also get an idea of where the missed-approach fix is and what itll take to get there.

Keep that page of the approach plate book open, because youll be referring to it a few more times.

How Instrument-rated pilots set up cockpit reminders for themselves is a topic for its own article. Some use Post-It notes; others write stuff down on a kneeboard. Still others trust their memories, with the help of a heading bug and/or altitude alerter to remind themselves of where theyre supposed to be and how they should get there. Whatever works best for you is what you should use.

The key, however, is getting a firm mental picture of where you are in relation to the airport and what will be involved in getting down from your cruising altitude to the runway. Its called situational awareness, and the accident record is littered with pilots who lost it-or never had it-when they tried an approach to minimums.

Avionics Issues
Back in the good old days when the number one nav radio had the only glideslope receiver, marker beacons were still in widespread use and flying real IFR meant being proficient with something called an ADF, getting your avionics set up for an approach meant a lot more knob-twisting and head-bobbing than it usually does today. Thats a good thing, but there are still some avionics-related traps. Like ensuring the autopilot is coupled to the ILS signal and not the GPS. Like making sure to hit the right button, if necessary, on the missed approach. In fact, there are a lot more traps for the unprepared or inexperienced these days than ever before. Paradoxically, todays process is both easier and more complicated

Just as when planning for an arrival, setting up modern avionics for an instrument approach begins well before hitting the final approach fix. Once we have the ATIS/AWOS information, we can choose the approach. Presuming well have radar coverage, its reasonable to expect getting a vector to join the final apprach course. If not, our clearance will be to an initial fix.Either way, we have to tell the equipment which well be doing.

Often, well be getting a vector to join the final. This means putting the autopilot in heading mode and then remembering to put it back into coupled mode once were aligned with the final. Well also be juggling power, landing gear, flaps and monitoring any stepdown fixes, etc. Sometimes, the easiest thing to do is hand-fly the airplane and let the automation cycle through the various approach steps on its own. Flying the airplane is always the highest priority.

Theres no checklist of which were aware that can conceivably handle either the way each airplane is configured or the various approaches available. Thus, efficiently configuring your avionics while bouncing along in the clag becomes a matter of experience with the particular panel and the approach type. To get the most out of your panel, find someone who knows your equipment-this doesnt have to be a CFI-to ride with you and go through the automation.

Wrong Steps
With the proliferation of GPS/RNAV approaches and the various intersections required to fly them, there are more fixes in our databases than ever before.Consequently, there are more opportunities to get confused-just because the fix is in the database, it doesnt mean the black boxes can tell us what to do with it.

We still need to check the plates profile view and minima table to decide how low we can go and when. Properly identifying stepdown fixes can mean the difference between making a low approach or ending up in the weeds.

As the “How Not To Step Down” sidebar recounts, even a professional crew can get out of sequence, and the subject accident occurred while shooting a relatively uncomplicated localizer approach. Apparently, this crew thought they were holding at a location further away from the final approach fix, not at the fix itself. So, they did not begin their descent to the MDA until actually passing the missed approach point, or MAP. In hilly terrain like that surrounding Martinsville, getting the stepdown fixes out of sequence can lead to a bad day.

Descending Too Low
A close cousin to using the wrong stepdown fix is the perennial problem of descending below DH or MDA. Unfortunately, this error has been a problem since the beginning of instrument flight. Whether the descent below MDA/DH results from taking a peek, from equipment problems or from misreading the approach plate, descending below the minimum authorized altitude on an approach rarely has a good outcome. Unless were on fire, out of gas or the wings are coming off, theres never a good reason to bust minimums.

So, what leads a pilot to descend too far on an approach? Inattention and fatigue come to mind, but so does an it cant happen to me attitude. Nevertheless, several people try this each year.

Missing The Miss
Most of the time, flying the missed approach past the missed approach point (MAP) is a matter of establishing a climb and following vectors for either another try or an alternate plan of action. The first chore of flying the miss, however, is knowing when to go around. So, knowing where we are in relation to the MAP is just as important as it is with intermediate and stepdown fixes.

And remember that the missed approach procedure does not provide adequate terrain clearance unless you implement it at the MAP. Turning too soon could put you into the side of a hill.

But beyond the big-picture skills of when to turn and which way, we also have to be able to handle the airplane. Its not often we get relatively low and slow and close to the ground in IMC and have to go to climb power and clean up because we cant find the runway. The abrupt pitch changes that can occur with some airplanes during a go-around have probably resulted in as many accidents as turning the wrong way.

Conclusion
In todays IFR system, automation in the air and on the ground has made many things easier than ever before. And its introduced new problems among personally flown aircraft, many of which have long ago been sorted out by the heavy-iron drivers. But the age-old problems of losing situational awareness, failing to become familiar with the necessary terminal procedures and refusing to follow the basic rules still get us in trouble.

Flying a decent, safe approach is not rocket science, but it does require planning ahead and thinking through the airplanes systems. If you cant do that, maybe you should stay home.