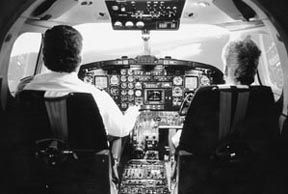 As one of the few airlines that are hiring and adding airplanes, my airline is going through a tremendous amount of training right now. We have recently added to our fleet a 70-seat version of the 50-seat jet we have flown for almost 10 years.

When it comes to jet aircraft, each pilot has to obtain specific training before legally operating the airplane. For the captain, that training consists of a type rating that is specific to that type of airplane. For example, a Lear jet type rating does not qualify a pilot to fly a Citation, even though both airplanes are turbojets and have some similarities.

Occasionally, a manufacturer will build different airplanes that are close enough in operation that the FAA authorizes a common type rating. Cessna has done this with certain Citations and the Boeing 757/767 are so approved.

In our case, the 50- and the 70-seaters will have the same type rating for the pilots despite some significant differences. The CL-65 does not have leading edge slats, the CL-700 does. The -700 has bigger engines, sits tail-high on the ground, and has a much higher pitch attitude during landing. There are also some differences in the systems, although the changes to the -700 systems are such that they are simpler than the -65.

The approach jet transport operators take can give some hints on the methods you can take when checking out in a new type of airplane. Manufacturers have had some success with streamlining their own products – stepping from a Piper Warrior to an Arrow to a Saratoga, for example – but moving from one brand to another can sometimes be problematic.

If you move from a Cessna to a Piper or from a Mooney to a Bonanza, youve got a lot more to consider besides changes in useful load and fuel burn. As mechanically simple and reliable as most general aviation planes are, there are differences between them that cannot and should not be taken lightly.

For example, the fuel system on a basic Cessna is almost idiot-proof. The one on a Piper is idiot prone. They use different door latches, flap mechanisms and landing gear systems. Their pitching moments with flaps are different, the sight picture and blind spots are shockingly dissimilar, and even the seating posture requires you to make adjustments to your flying.

In each case, one is not necessarily better than the other. Each is just different.

Before You Fly
If you are planning to get checked out in a new airplane this summer, take the time to do it right. Get the POH for the new airplane, and make sure that it is the right one for the model you are going to fly. The POH for a two-year-old 172 is not acceptable for a 1979 model 172 – nor is a 1986 POH.

There are differences from model to model, and sometimes those differences are significant. If the FBO does not have the POH for the model you need, have them order it or order it yourself from one of the numerous pilot supply sources that handle copies.

Spend some time studying the book. Look carefully at each system. Compare it to the plane(s) you are used to flying, so you can clearly see the differences and formulate questions to ask the CFI who checks you out. Certain systems require more attention than others, particularly the electrical, fuel and hydraulic systems. Be familiar with any emergency features and understand them in detail.

If the system has an emergency checklist of any sort, study the checklist and make sure you understand why it is written in that particular order. There is a logic to any checklist, and if you cant understand it, then you dont understand the system.

Learn the airspeeds. Airspeeds from a Cessna do not necessarily carry over to a Piper. If nothing else, one might be marked in miles per hour and the other in knots. Some airplanes allow you to extend a notch of flaps outside of the white arc. Others dont. The V-speeds are numbers you should, if not memorize, at least be familiar with.

If you plan to do cross-country flying in this new bird, spend quite a bit of time in the performance section. Make sure you understand the way the charts are set up and how to read them accurately. If they have small notes on the bottom of the charts – there must be some obscure FAR that requires mouse type, because they all have it – make sure you take those notes into account.

Plan a typical trip in an airplane you are familiar with, then do it again in the new airplane. Sometimes you need to use more than one chart to finish a problem. Know when this applies. Have an instructor or someone intimately familiar with the model check your work.

It may sound like overkill, but, as they say, knowledge is power. Finally, find out when the plane will be empty for an hour or so and spend some time in it while its tied down to get familiar with it. This is the time to determine where you want the seat to be, this is the time to figure out the radios, this is the time to work through each of the emergency checklists for the first time. Dont wait until the airplane is in the air to do this.

Do a full pre-flight with the checklist in your hand, then go through the normal checklists while sitting on the ground. Since you dont have the engine running, it wont cost you anything but your time. Dont allow yourself any distractions.

In the Air
When the day comes for the beginning of your checkout, the instructor ought to spend quite a bit of time on the ground with you to make sure that you have prepared yourself. There should be some kind of review about the systems, speeds, flight characteristics and avionics.

If the instructor just wants to jump in the plane and do three landings, find another instructor – especially if you are checking out at an airport on vacation that you are not familiar with. I have never done a checkout with a student that didnt consists of steep turns, stalls, simulated engine failures, some hood work, and soft- and short-field field takeoffs and landings. I also incorporate landings with the flaps at each possible setting between full up and full down.

Pay particular attention to equipment with which you may not be familiar, including avionics, autopilots, oxygen, and speed brakes. Know how to tell if theyre operating as they should be and what to do in each kind of failure mode. Know some things by heart – such as electric trim runaway and emergency gear extension.

Instrument-rated pilots who envision flying in IMC should shoot a couple of approaches under the hood and fly a bit of partial panel. Obviously, some highly experienced people dont need as much of a look see as others. Ironically, those people are often the most willing to take the extra work, and dont complain about paying for it.

There are many pilots who use such airplane checkouts as an occasion to get signed off for a biennial flight review or instrument competency check. Something else to consider is that if you do have a big blunder (or even just a small, expensive one) the insurance company will find out if you had a sub-par checkout. The CFI and the FBO will get hit hard, but so will you – not just by the insurance company, but also by the FAA, and perhaps by the owner of the airplane.

Airline pilots fly 50-80 hours a month, and even on something as simple as differences training, they take it seriously and do not cut any corners. Most general aviation pilots are lucky if they fly 50-80 hours a year.

Chip Wright is an airline captain and CFII.