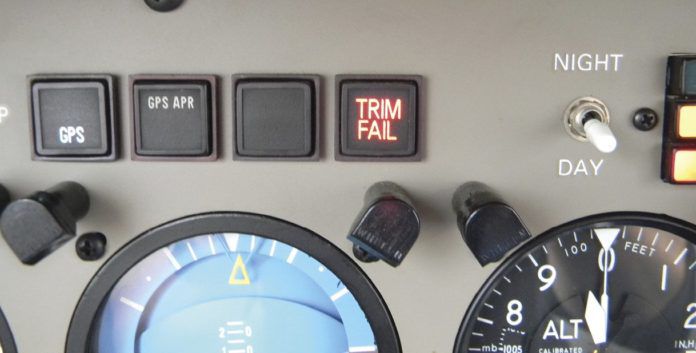 Years ago, when I first heard the term “runaway trim,” my initial thought was something along the lines of, “How can that happen?” All of the trim systems I’d seen up to that time had been manual, unassisted crank, lever or thumbwheel affairs, which rely on the pilot grabbing something and moving it to achieve the desired change. I was aware that trim systems could mechanically fail, but generally would stay in a fixed position when they did. I had discussed and trained for abnormal trim conditions, but how could a trim system “run away”? Then I learned about electric trim, autopilots and runaway trim, and it all became clearer.

The closest I’ve come to a runaway trim situation was pilot-induced: I mistook the pitch trim button on the yoke for the push-to-talk switch. Several times. Hilarity ensued, and ATC, especially, was clearly entertained by the whole thing. Thankfully, some on-the-job training regarding which switch did what resolved the matter, but it highlights one of the keys to managing an abnormal trim situation: There’s no substitute for complete system knowledge. As important as that knowledge is, it’s usually easy to come by.

Of course, we’re mostly talking about pitch trim, the system that adjusts the elevator or stabilator position to relieve control pressures in various phases of flight. Depending on the airplane, it also may be equipped with rudder and/or aileron trim, either of which will function in the same basic way as the pitch trim system: move a wheel, knob or handle and the airplane responds.

Perhaps the most common application of pitch trim is to lower the nose in cruise as the airplane accelerates. A conventional airplane (i.e., one with a rear-mounted stabilator or horizontal stabilizer and elevator arrangement instead of a front-mounted canard) leveling off after a climb will need some nose-down trim to allow the pilot to relax his or her control input and place the airplane in an attitude where it cruises without gaining or losing altitude. Yes, it can be tricky finding this sweet spot sometimes, but that’s why you get the big bucks.

In other attitudes and at other airspeeds, trim is used for the same purposes but often requires different application. When slowing for an approach and landing of that same conventional airplane, for example, we’ll want to remove some of the nose-down trim we applied for cruising (i.e., trim nose-up) to reflect the new speed and attitude.

A typical personal airplane will have a control of some sort—the aforementioned thumbwheel, crank or lever—allowing the pilot to apply a mechanical force to the trim system and set its desired position. This system can employ an arrangement of cables wound around a drum and/or a jackscrew that transfers the pilot’s motion into changes of the trim tab’s position. The system will have the same basic components whether the airplane is equipped with a conventional elevator and servo trim tab or with a stabilator and anti-servo trim tab.

A mechanical system like this doesn’t “run away” unless or until it is supplemented with an electric trim arrangement or an autopilot. Either can fail in different ways. Some of those failures involve actuating the trim system in an undesired manner.

Of course, some of the airplanes we fly have an all-electric trim system without a purely mechanical mode. For all intents and purposes, pilots can consider such a system in the same way they would a mechanical one to which an electric servo has been added.

One type of trim runaway involves a failed switch. That button under your thumb in a typical electric trim installation is a simple mechanical device, usually spring-loaded, and when thumbed forward or aft energizes the electric trim system. Elsewhere in the system, there also may be a limit switch, one that opens the circuit powering the pitch trim servo and shuts it off when system components reach a predetermined full-up or full-down position.

Those switches can fail. If they fail in the closed position (i.e., energized circuit), they may cause the pitch trim servo to run until it reaches some mechanical limit. In extreme cases, it may also remain energized after reaching that limit, with unpredictable consequences including fire. Either way, a switch that fails in the closed position will keep the circuit energized and the trim system engaged. By design, it will keep trying to change the trim setting until some physical limit is reached.

The fix for such a situation is to remove power from the electric trim circuit. Depending on the installation, there should be a dedicated switch controlling that circuit. Ideally, it’ll be in the pilot’s line of sight and equipped with internal lighting, illuminating when the electric trim system is energized and in motion. That way, at least you’ll know in a hurry which button to push when you need it.

If not, there will be a circuit breaker associated with the electric trim system. It typically is found in the panel with the rest of the airplane’s circuit breakers and should be both properly labeled and pullable. It’s always a good idea to find the trim and/or autopilot circuit breakers when introducing yourself to a different airplane. Note that circuit-breaker locations are not uniform—especially when considering field-installed equipment—and the circuit breaker you’re looking for on some dark and stormy night may not be in the same place as on the flying club’s other airplane, even if they are almost identical.

This kind of relatively simple switch failure typically only occurs when the pilot activates the system to change the trim setting manually. When it happens like that, it’ll be obvious that the system didn’t shut itself off after you energized it. But with an autopilot or electronic flight control system also connected to the electric trim, it may not be nearly so obvious what’s happening in a runaway situation.

One type of trim failure I’ve experienced involved a two-axis autopilot that somehow got out of sync in the pitch attitude. The airplane would fly fine in altitude-hold mode but would enthusiastically pitch nose-up whenever the autopilot was disconnected. The autopilot had trimmed the airplane nose-up, but the system also exerted some nose-down force on the elevator. When the altitude-hold function was disengaged, the autopilot released the force it was exerting on the elevator and the nose-up trim took over. Fun times.

Which brings us to the other major kind of trim runaway: one caused by the airplane’s automatic flight control system, or autopilot. The big difference between when the autopilot is the problem instead of some mechanical failure is the failure mode and how it’s resolved. A topical example involves the Boeing 737-8/-9 MAX and its flight control system logic that reportedly adds nose-down trim when receiving erroneous angle-of-attack data to help prevent a stall. (See the sidebar above.) According to an emergency airworthiness directive, the 737-8/-9 MAX “pitch trim system can trim the stabilizer nose down in increments lasting up to 10 seconds.”

Most of the aircraft we fly don’t have flight control system logic that “sophisticated.” But stuff happens. Often an automation-related trim failure can be traced to a programming error by the pilot. If you just did something and the airplane doesn’t react as you expect, undo whatever you just did. If that doesn’t work, use the autopilot disengage button, then the power switch. Happily, the procedures we employ to resolve a system-related trim runaway transfer to the automation-related variety: shut off related systems. Once things settle down, run the appropriate checklist.

On October 29, 2018, Lion Air Flight 610 crashed into the Java Sea shortly after taking off from Jakarta. All 189 passengers and crew aboard the 800-hour-old Boeing 737-8 MAX died in the accident, the deadliest involving a 737 since the type entered airline service in 1968.

The Indonesia National Transportation Safety Committee’s (NTSC) investigation reportedly is focusing on the 737 MAX fleet’s incorporation of a maneuvering characteristics augmentation system (MCAS) for stall protection and its behavior when receiving erroneous data from one of the airplane’s two angle-of-attack (AoA) sensors. Since the crash, Boeing has issued related service bulletins, and the FAA has published an emergency airworthiness directive regarding flight crew procedures in the event of “uncommanded horizontal stabilizer trim movement” and erroneous AoA input.

A preliminary report from the NTSC included the graph at right of the accident flight’s digital flight data recorder information. Below, we expanded a group of traces from the DFDR graph for enhanced readability.

Each aircraft’s equipment is different, and the location of autopilot disengage buttons, avionics master switches and even the ship’s master switch will vary from one to the other. This will be true among older and newer versions of the same aircraft type, and especially so when considering field installation of related equipment, as it is with circuit breakers.

So it’s important we know where these various switches and associated circuit breakers are. The circuit breakers for electric trim and autopilot systems should be the pullable kind, and it won’t hurt to highlight them for quick reference, perhaps with color or a unique placard.

It’s also a good idea to study the supplements and manuals for details on the trim or autopilot’s operation. Plenty of pilots have misconfigured an autopilot because they didn’t read the manual, myself included.

Some of your response to a runaway trim event should be automatic and not require a checklist. Above all, fly the airplane, even if it means both hands on the pitch control and pulling as hard as you can. Find the appropriate switch or circuit breaker.

If nothing else works, consider using the master switch to shut everything—and we mean everything—down. Obviously, flight conditions and availability of systems like landing gear can make doing so problematic, but it might be the smart thing to do. Basic, mechanical flight instruments likely will be fine and required electric-powered instruments have their own backup power system, perhaps on a dedicated buss.

Trim is a secondary control; the airplane will fly just fine without a functioning trim system. If you disable it, there may be some limitations—like high control forces or maximum speeds—and you should be prepared for reduced operational capability/flexibility until the matter is resolved.

Finally, remember that everything’s relative. If the nose wants to point in a certain direction that will lead to loss of control or colliding with terrain, you still have two other axes with which to control the airplane. It’s a movie clich, but a last resort might be to roll inverted, or to some other bank angle, reversing the tendency. Needless to say, it would be preferable if you’ve been upside-down before.