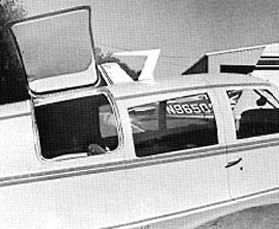 Sometimes the amazing thing about airplanes is that they fly at all. Aerodynamicists will tell you how lift is created, engineers will demonstrate how power is related to speed, but any pilot will tell you there are two things necessary to make airplanes fly: brains and money.

The money part is as predictable as it is essential. But the brainwork is a little less concrete. Many very smart people have tried and failed at the task of being safe, competent pilots. Many very fine pilots are on the short end of what old-timers might call book smarts.

The puzzling thing indeed is when experienced pilots who know their way around airplanes make poor decisions that forced unsuspecting people to pay heavy prices. Human beings all make mistakes, but the enormity of some mistakes pales only in comparison to the anguish they bring.

Consider one Mooney owner, an experienced pilot who had owned a one-fifth share of the Mooney 201 for years. The pilot had logged more than 1,000 of his 1,851 hours in the Mooney. He was also an A&P mechanic who did much of the maintenance on the airplane.

His partners in the airplane described him as a good pilot, although one also reported he had a macho image of himself. A picture emerged of the pilot as skilled and competent, one who knew the airplanes systems and capabilities intimately.

One April morning, the pilot prepared the 201 for a trip from Nashville to Roanoke, Va. At 9:15 he stopped by the Flight Service Station located on the field and got his weather briefing while sitting next to the preflight briefer. He could see the charts and reports the briefer saw. The picture was not a pretty one.

During the briefing, he was sitting beside me and saw all of the information, the briefer told investigators. We looked at the radar returns for the route which, although raining, the areas were not that widespread. I asked if he had any questions. His reply was no.

The pilot filed an IFR flight plan and departed to load the airplane.

The trip was to attend the first birthday party of the nephew of the passengers. The airplanes fuel tanks were topped off after its last flight, as was customary among the partners. With 64 gallons of fuel and the Mooneys vaunted efficiency, the 330 nm flight could easily be made nonstop.

What came next may surprise almost any Mooney pilot and dumbfound critics of the airplane who call the cabin cramped. In addition to the 200-pound pilot, the airplane was also slated to carry a 230-pound man and his 235-pound wife, two small children, a car seat, a kid bicycle, gifts and clothes for the birthday boy, clothing for the five occupants, and the charts and other paraphernalia endemic to flight.

The Mooney, squatting on its solid rubber biscuit shock absorbers, was loaded to an estimated 3,035 pounds, far in excess of the 2,740 for which it was certified. In addition, the center of gravity was estimated at 147.38 inches – about nine inches behind the aft limit outlined in the Pilot Operating Handbook. Nevertheless, the Mooney took off from runway 2C at 10:23.

An airmet was issued between the time the pilot got his briefing and took off, calling for moderate rime/mixed icing in clouds and precipitation, between 5,000 feet and 11,000 feet along the route of flight. Its unclear whether the pilot ever got word of the airmet.

Radio transcripts showed the flight originally proceeded uneventfully. The pilot filed a Pirep at 10:44 reporting 40 miles east of Nashville with a smooth ride, cloud tops at 8,700 feet and negative icing.

The airplane was cruising at 9,000 feet when he reported to controllers at 11:38 that he was riding in the tops of the clouds and requested a climb to 11,000 feet. Although he made no mention of having picked up ice, cloud tops are good places to find it.

Two minutes later the controller granted a clearance to 10,000 feet, then a minute later amended it to 11,000 feet. The pilot was then handed off to another Center controller. When he checked in with the new controller, he reported he was at 9,000 feet. When asked to verify he would climb to 11,000, he responded, Roger.

Radar data shows the airplane climbed to about 9,400 feet and leveled off for about a minute. Then it began climbing again, reaching 9,700 feet, before descending again to 9,400 feet. A few seconds later, it entered a steep vertical descent and crashed.

For several minutes, controllers hunted for the airplane. They queried different radar sites to see if anyone was picking up a primary target. They asked nearby airplanes to monitor 121.5 for an ELT signal. During the search, a Cessna 340 that had been flying nearby in the opposite direction reported moderate mixed icing conditions while descending from 10,800 to 8,500 feet.

Another airplane, a Skylane, called in reporting moderate ice and asked to descend. The controller cleared the airplane down to 7,000 feet, at which point the Skylane pilot said he was between layers and the half-inch of ice accretion was starting to come off.

After the accident, one of the pilots partners praised the pilots skills, but added an ominous statement. The partner said the pilot was a little aggressive and that he would probably not mention any problems in flight for fear of unsettling his passengers.

With its service ceiling of 18,800 feet, a Mooney 201 still has a reasonable climb rate when ascending from 9,000 feet to 11,000 feet. In the minutes before the crash, the Mooney was showing climb rates of 400 to 500 fpm while still maintaining a groundspeed of more than 100 knots. After the pilot lost control, the airplanes groundspeed on the last few radar hits had dropped to less than 50 knots while the vertical descent approached 10,000 fpm.

In something of a testament to the Mooneys structural integrity, it apparently did not break up in flight despite the rapid descent.

In the 1,000+ hours the pilot flew the Mooney, he doubtlessly came to understand its performance and strengths – perhaps so well he lost sight of the airplanes limitations.

In a way the pilots experience worked against him. The Mooney did, after all, struggle into the sky and wing toward its destination for more than an hour before tragedy struck. The loading transgression suggests hed had experience pushing the airplanes useful load, perhaps gradually at first, but ever upward as the airplane continued to rise to the challenge. What it couldnt rise to, however, is the extra weight, the aft cg and the aerodynamic tricks of icing conditions.

Hangars are full of tall tales about excessive loading and about carrying prodigious quantities of ice. Most airplanes let you get away with slight overloading or trace ice. Smart pilots need to know where to draw the line between light and moderate, just as they need to understand that combining out-of-limits operations opens up a whole universe of uncertain handling and performance characteristics.

Also With This Article
Click here to view “Loaded Aircraft Moment and Weight.”