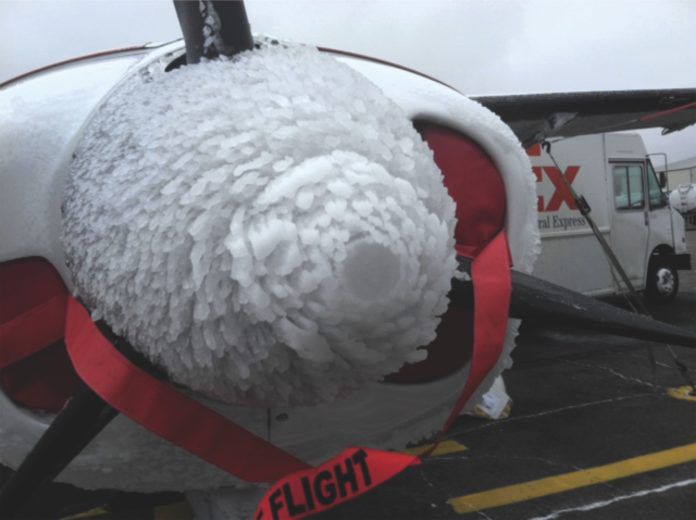 I received a call from the owner of a turbocharged, high-performance single who lives in the Great Lakes region, well-known for icing conditions in late autumn, winter and early spring. His airplane was equipped with an aftermarket TKS-style ice protection system and was not FAA-approved for flight in known icing (FIKI). The pilot wanted to discuss strategies for flight during the cold times of the year, including insights into conditions where icing layers are vertically thin and/or rates of ice accumulation are typically light (or even only a “trace”).

I kept circling back to the fact that his particular airplane was not FIKI-approved and that he does not have the authority to make a “quick climb” or “quick descent” through an icing layer, to take off when airframe ice is reasonably possible where he will fly, or to begin a descent and approach if the airplane ahead has reported even a trace of ice.

“Are you telling me I can’t fly my airplane in IMC at all in the winter?” the pilot fumed in response. “Yes, that’s exactly what I’m telling you,” I replied. The caller wanted me to support his airplane’s desired utility and teach him specific techniques for minimizing ice accumulation. I had to tell him that any ice at all is enough to cause him to divert, delay or cancel a flight, whatever it takes to remain away from “known ice.”

Keep your speed up

The greatest hazard of airframe ice is the adverse and unpredictable effect ice has on aerodynamic surfaces. The wings and tail will be less effective with even small amounts of ice; further, since ice accumulation is not always symmetrical, there’s a strong likelihood the adverse effects will come unexpectedly, without warning. If airflow disruption is the biggest hazard, it seems reasonable that simply keeping your speed up will overcome the adverse effects and assure a safe landing with a load of ice. This rationalization is flawed.

In most airplanes, keeping the speed up with significant ice accumulation requires putting the airplane into a descent—sometimes a pretty dramatic one. One problem is the airplane may not have the control authority to recover from the descent when it comes time to land.

Secondly—and frequently overlooked in discussions of landing with a load of ice—forward visibility can be reduced to nil with only a very slight coat of frozen water. At night or in poor visibility, even small amounts of accumulation on the windscreen can distort visibility, making landing difficult. Regardless of the time of day, it’s very likely that you’ll have to resort to Lindbergh-style peripheral vision out the side windows to flare (such as it is with ice) and land.

Rationalizing that “speed saves” in ice is correct as far as keeping the wing flying. But keeping your speed up is not a reliable method of bringing an iced-up airplane in for a safe landing, especially on a typical GA runway. If ice is encountered, execute your preplanned “out” to remove it before you make an approach and landing requiring higher speed.

Rationalizing that it’s better to have extra power than to be able to remove ice, is correct…to a point. Extra power may allow you to climb through an icing layer (legally or not), but eventually you have to come back down. If you encounter icing in descent and/or on approach, the extra power won’t help.

Further, an iced-up propeller becomes less efficient at converting twist into thrust—it’s an airfoil, too—and the wings and tail become aerodynamic unknowns. What has been said about the effects of density altitude on airplane performance goes for airframe ice accumulation as well—you can’t turbocharge the propeller, wings or tail. Rationalizing that power overcomes ice does not hold up if the pilot is unable to escape to an area where ice is shed before descent and landing. By itself, turbocharging is not an ice-avoidance strategy.

A small chance of icing is OK

One of the most significant advances in winter-weather risk management in the past few years is the introduction of the current icing potential (CIP) and forecast icing potential (FIP) briefing products. These charts respectively show the likelihood and anticipated intensity of ice accumulation. Some tablet-based flight planning software packages enhance the charts and break them down by altitude to make them even more usable. Some examples fromwww.aviationweather.gov. are reproduced on the opposite page.

I’ve found the forecast likelihood of airframe ice makes some pilots consider flight where the anticipated accumulation is “light” and the probability of encountering ice is low (less than 25 percent). It’s true that these conditions are less likely to result in a life-threatening ice encounter, but they are still icing conditions—something to avoid in airplanes not certificated for ice, and to be escaped from in a FIKI aircraft if accumulation begins.

What Is Known Icing Anyway?

To the extent there’s an FAA definition of known icing, it’s in this paragraph from a 2009 letter from the agency to AOPA:

The FAA lists these products, at a minimum, as those a “prudent” pilot would evaluate to determine there is no likelihood of airframe ice accumulation:

Even in a “known-ice” airplane, vision may be severely limited by ice. At its best, a windshield “hot plate” deicer opens only a small rectangle for forward visibility. Often this clear zone is in the center of the windshield, not directly in front of the pilot.

Certification for flight in icing conditions has definite limits. It generally does not include approval for flight in icing conditions resulting from supercooled water droplets (common in cumulus clouds) or in freezing drizzle/freezing rain. “Known ice” in the airplane’s limitations therefore does not mean the airplane is safe (or legal) to fly in any kind of airframe ice. What it does is provide the pilot with the option of legally attempting a flight in areas of suspected rime or areas of very limited clear or mixed icing.

Prudence dictates that the pilot have a clear, preplanned escape route into ice-free air even (or especially) if he/she intentionally exposes the aircraft to areas where airframe ice accumulation is likely. Rationalizing that “known-ice” airplanes can fly in any ice-laden air is true to a point. But it does not hold true if the pilot does not escape icing conditions if they are found.

So, yes, an airplane not certificated for flight in icing conditions is essentially prevented from flight in IMC for that portion of the year when air temperatures are likely to be near or below freezing at the altitudes the pilot wishes to fly. Strategies for avoiding ice include:

• Flying only in VMC (whether under VFR or IFR).

• Flying at altitudes that remain below the freezing level.

• Flying in the warm air of an inversion with no precipitation or a cloud layer below with temperatures conducive to ice formation.

It’s surprising how frequently wintertime flights can be made using these strategies. Yes, it’s yet another level of hazard that impacts your go/no-go decision-making and just like thunderstorms in warmer times of the year, often it takes only a short delay or diversion to avoid the risk of airframe ice.

Way back in 2008, the FAA published a discussion of the safety challenges posed by flying in icing conditions. The full four-page document is available online ffasafety.gov. One aspect of airframe icing explored was airplane certification and handling.

“Prior to 1973, small airplanes were not…tested to the icing condition standard used today…. Small airplanes certificated prior to 2000 were given certification credit for natural aerodynamic stall warning (buffet) even if the airplane was equipped with a stall-warning system. Since ice buildup on the wing lowers the stall angle of attack, the stall-warning sensor might not provide warning in icing conditions.”

Pilots should treat their POH/AFM “recommended” minimum icing airspeeds as limitations. “If your POH/AFM does not have minimum icing airspeeds, add 15 to 20 knots indicated airspeed to your normal operating airspeed. This goes for all phases of flight, including approach and landing, where most small airplane icing accidents occur. Also, treat any buffet or vibration as an impending wing stall, and limit maneuvering in icing conditions.”

“Pilots should consider the climb performance of the airplane and the route’s minimum altitude when determining routes and exit strategies in preflight planning. The airplane’s climb performance will be degraded in icing conditions.” Changing altitude to warmer or drier air may get you out of icing. But “don’t assume you can climb with ice on your airplane.” Stay at or above the minimum icing speed and consider a 180-degree turn. You may need to enter a slight descent—trade altitude for airspeed—to remain above that speed.

Of course you wouldn’t knowingly take off with snow, ice or frost on the airframe, if for no other reason than it hasn’t been tested. “No airplane manufacturer, nor the FAA, has an established procedure for polishing frost, and the lift and drag penalties are unknown…. Make sure critical surfaces such as lifting surfaces, control surfaces, propeller blades, and engine inlets are free of contamination.”