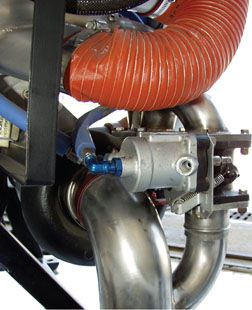 Like most adventures in the aviation business, it all started with a phone call. I was in Newport New (PHF), Va., for a three-day Pilatus PC12 course when an aircraft dealer called me, asking if I could ferry a turbo-charged single from Florida to Seattle, Wash., and then bring back a different aircraft. It sounded pretty convoluted to fly 2436 nm just to turn around and bring back another same model aircraft. Although I was not inclined to do it, they pleaded with me, so I took the four-day trip.

I left Florida on a Thursday afternoon in September with a relatively new (less than 30 hours total time) aircraft. The ship was well-equipped, with a Garmin GNS530, GNS430 and Honeywell KFC225 flight director. A client of mine lent me his brand-new GPSMAP 396.

My habit on long trips is to set up the GNS530 and GNS430 the same way I have written about: track up, auto zoom on, and data fields including BRG, TRK, DIS, GS and, of course vertical speed required (VSR). The GPSMAP 396 was set to record track history every five seconds.

With three color moving maps and a roll-steering autopilot with altitude hold, this shouldnt be too bad of a trip.

The first and second days went well and found me at Idaho Falls, Idaho (IDA). Only 516.9 nm remained to Boeing Field (BFI) in Seattle. Then the trip home.

After passing DNJ, I noticed the clouds were getting lower and the OAT was -6 degrees C. I asked Salt Lake Center for an IFR clearance at FL190 or higher and was soon cleared direct to BFI. I began a cruise climb and I was looking forward to an early seafood lunch. Time was 10:37. Life was good.

Powerless
Then things stopped going well. I was in IMC and still in the climb when the engine noise became completely different and I felt a big deceleration followed by a descent. The analog manifold pressure gauges needle was below its bottom indication of 15 inches. I put all the power levers full forward.I had engine rpm but no sign of life from the MAP gauge. And I had been having such a good day.

This particular aircraft has a very high wing loading, which results in high descent rates at the best glide speed. I trimmed to that speed, brought up the nearest airports on the GNS530 and selected Council Municipal (U82) which was 6.9 nm away on a heading of 202 degrees. Since Im now in IMC with very suspect vacuum-driven instruments, I disengaged the autopilot but kept the flight director alive.

I turned so that bearing and track matched up on the Garmin GNS530. My descent rate at best glide speed was 1500 fpm. The terrain immediately below me is at 3638 feet, so Ive got about nine minutes to stabilize this problem or risk not being found until the next spring thaw.

Bad Council
I told Center that I could not hold altitude and was headed for Council Municipal, now only five nm away. I was cleared to descend to 12,500 feet, the minimum vectoring altitude in that area. The VSR was showing me well above the required altitude, so I began evaluating Council Municipal.

I noticed the airport has no repair facilities, no weather observation, no published approaches and only a 3600-foot by 50-foot runway. On the other hand, McCall, Idaho (MYL), has a 6100-foot runway, an ASOS, published approach procedures and repair facilities. It was a better deal, was only 13.6 nm away and Id have a tailwind. After selecting MYL as the destination and turning toward it, I was now doing about 171 knots ground speed and the VSR was getting higher and higher.

I didnt realize it at the time but my manifold pressure (the thing that I thought had abandoned ship a few minutes earlier) was actually starting to creep up. It was still below 15 inches, the bottom of the gauge, but the slow power increase was decreasing my descent rate. The reality is that I did not have engine failure but only a turbocharger failure. It was barely enough power to hold altitude and nowhere near the 17 or so inches a normally aspirated engine would have.

Say Intentions
By now, I had just about reached Salt Lake Centers minimum vectoring altitude of 12,500 feet. The controller told me that if I wanted any lower, Id have to do the full procedure for the GPS Runway 34 approach; no radar vectors were available. The 396 was displaying the Metar at MYL (200 degrees @ 26 knots, broken at 6000 feet, altimeter 29.70 inches), and the idea of trying to do a full procedure and hold altitude while circling to land was a bit too much of unknown for me. I may have had a bit of power, but how much and for how long? I decided to continue direct to McCall.

Just as I was about to go below the MVA without being on the published procedure, I broke out of the clouds. I cancelled IFR and continued to McCall, thinking this just might work. As I got closer to McCall, my VSR was very high; in fact, I crossed the south end of the airport at 4700 feet agl.One spiral to go, please. Gear extended, flaps extended and on final, I could almost taste the coffee at the FBO. I landed without incident at 10:55 MDT.It had been a very long 18 minutes.

Aftermath
The aircraft I was supposed to pick up in Seattle and fly back to Florida was flown to McCall that afternoon. The Seattle pilot and I remained overnight, had a great steak dinner at company expense, and then left early Sunday morning for Boise, Idaho, to drop him for an airline flight back to Seattle.I continued on to Florida, getting there Monday afternoon at 4:55 local time. It was easily the most unusual cross-country trip I have taken.

Analysis of the turbo and its plumbing was inconclusive. One technician is convinced foreign-object damage caused the failure, while another has not found an obvious reason for it.

As this issue of the magazine went to press, the aircraft was still on the ground at McCall. The engine has been removed and shipped off to Lycoming for repair. Both the airframe manufacturer-who asked not to be identified for this article-and Lycoming are pointing fingers at each other as to whether the failure and damage are covered under the engines warranty.

Also With This Article
“Why Turbo Failures Are Bad News”
“What To Do? Where To Go?”

-Paul Sanchez (sanchezpaulk@mac.com) is a CFII-MEI who does insurance qualification courses and avionics training nationwide at his clients locations.