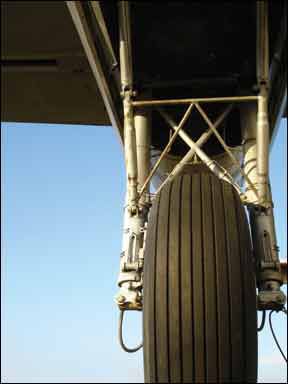 With the possible exception of a hot-air balloon, no matter what kind of aircraft you fly—airplane, glider, helicopter or blimp—it has an undercarriage of some sort, used when it’s on the ground. The component(s) actually resting on the ground can be tires, skids, floats or skis, but they’re attached to the airframe via the undercarriage. In turn, the undercarriage can be fixed, retractable or a mix (e.g., the main gear retracts while the tailwheel doesn’t). And just as there are a seemingly endless number of airframe configurations, undercarriages come in many different flavors.

Knowing how your undercarriage works to support the aircraft’s weight while it’s on the ground (or water) may not seem to be the sexiest topic, but it’s crucial to understanding how to take off, land and taxi, as well as maintain everything. That knowledge also can be handy when something isn’t working right, or needs maintenance.

A Brief History Lesson
Of course, the simplest undercarriage might be that found on an original Wright Flyer. It’s basically a pair of skids, mounted centrally underneath the airplane and of sufficient length to provide the balance necessary to prevent the aircraft from tipping forward or aft. That same basic design is popular with helicopter manufacturers but long ago fell out of favor with airplane designers before World War I, when wheels were added. One exception is the tailskid: Airplanes of the era didn’t have brakes and didn’t land on pavement—there wasn’t any. The tail skid helped slow the airplane on landing.

Soon, retractable undercarriages appeared, offering higher cruising speeds but also additional weight and maintenance requirements. Of course, maintenance requirements got intensive when the pilot forgot to extend the undercarriage for landing. Even so, most tailwheels didn’t retract and the systems were sufficiently unreliable that smart designers didn’t fully enclose the main gear, accepting the additional drag. For example, a DC-3’s main gear doesn’t fully retract, nor does its tailwheel. The airplane can be landed with the main gear retracted and not suffer major damage, except perhaps for its propellers.

By the time the Beech Bonanza appeared in 1947, there were two basic kinds of land-based aircraft: Fixed-undercarriage and retractables.

Thanks to advanced materials and aerodynamics, keeping the undercarriage in the so-called “down and welded position” is popular when designing new personal airplanes. The resulting airplane’s simpler systems, reduced empty weight and reduced training (and insurance) requirements all argue strongly in favor of fixed gear. The lost speed advantage can be minimal, as anyone racing an IO-550-powered V-tail Bonanza against a Cirrus SR22 will tell you.

But retracting the gear or not is only one of many variations. Some airplanes, of course, don’t have any landing gear at all—just a hull for water landings. Others are equipped with floats, which may or may not have retractable gear built into them. The Hughes H-4 Hercules, popularly known as the Spruce Goose, was designed strictly for landings and takeoffs on water and lacked anything considered an undercarriage.

Conventional
In this undercarriage design, the main wheels are placed ahead of and relatively close laterally to the airplane’s center of gravity. A smaller wheel is located at the tail, sometimes being the aft-most component. The tailwheel usually is steerable, using the rudder pedals. It can be retractable, but most so-called “taildraggers” are designed to be simple, robust airplanes, most suitable for unprepared landing areas. Example aircraft include the aforementioned DC-3, many Pipers including the Cub and the Cessna 120/140/170/180/185 models.

This type of undercarriage arrangement routinely is lighter, costs less to manufacture and requires less maintenance than the most-popular alternative, the tricycle undercarriage. As such, it’s the usual choice for utility airplanes as well as high-performance aerobatic airplanes, which likely will never see an unpaved runway. Using a small tailwheel also eliminates the risk of damaging the larger—and heavier—nosewheel of an airplane with a tricycle undercarriage.

Many tailwheels have some sort of locking feature, whereby the pilot can choose to allow them to swivel freely or lock them into alignment with the fuselage. Locking the tailwheel helps minimize the chance of a groundloop, the conventional undercarriage’s worst “feature.” Steerable tailwheels remain engaged to the rudder pedals until the rudder is deflected some 30 degrees or so off the airplane’s centerline. Once that occurs, the tailwheel disengages and is free to swivel.

Unfortunately,  30 or more degrees of rudder travel can be required to arrest a developing groundloop. Right when you need the tailwheel to track with the rudder, it unlocks, and away you go.

The groundloop occurs when sideloads are applied to a rolling airplane with conventional gear and aren’t corrected by the pilot. Once the tail starts to swing one way or another, it must instantly be corrected or the groundloop starts. Remember that the airplane’s center of gravity is aft of the main wheels. This has the unhappy result of multiplying the effect of the tail’s lateral displacement, giving it momentum. Once the tail starts to swing around, that side’s wingtip can drag, causing day-ending damage, or worse.

Tricycle
If pilot preferences between conventional and tricycle undercarriages can be consider a war, then the latter design definitely won. Aside from the aforementioned utility, recreation and aerobatic airplanes, almost no manufacturer today offers anything other than a tricycle design. The attraction of a tricycle design is that it all but eliminates the groundloop and the high-pitched nose/obstacle problem. In fact, one has to work really hard at groundlooping a trike.
The tricycle undercarriage’s popularity stems from its stability. First, the airplane’s center of gravity is ahead of the main wheels. On similar designs, say the Cessna 170 (taildragger) and 172 (trike) models, the taildragger’s main wheels are mounted well forward of the trike’s. The main gear usually are wider than a similar conventional undercarriage, something observable when considering the Cessna 170 and 172.

Despite its stability, the tricycle undercarriage has some drawbacks. The first is weight; a nosewheel is significantly heavier than a tailwheel. Add more weight if it’s steerable and/or retractable. That additional weight makes a slow-speed takeoff more difficult and requires a higher speed than a conventional undercarriage, all things being equal. That’s because the pitch control needs more authority to lift the heavier nosewheel off the ground. For that reason—again, with all other variables equal—a conventional gear airplane will have superior short- and soft-field performance when compared to a trike.
Another issue is the nosewheel’s tendency to shimmy—have you ever seen a shimmy damper on a tailwheel? Getting the weight off the nosewheel helps minimize the problem, as does ensuring all the bushings and strut components, if any, are within tolerances.

Finally, nosewheels and related components are relatively fragile. They’re usually first to arrive at the scene of an accident or incident, and can damage other airframe components—like firewalls—when they do. Ask your friendly neighborhood aircraft mechanic about the Cessna 182 and firewalls that become wrinkled in an off-runway excursion or when a pilot lands on the nosewheel.

Fixed VS. Retractable
Non-retractable undercarriages, of course, are also known as fixed-gear systems. They can be of the tricycle configuration, like a Cessna 172, or conventional, as with a Piper Cub. Retractable tricycle-gear airplanes usually fold all three gear legs. One exception is the Rutan-designed VariEze and Long-Eze, which fold only the nosewheel. The obvious advantage of a retractable undercarriage is speed: eliminating all that “unnecessary” drag helps boost cruise airspeeds. The disadvantages are more numerous.

For one, there’s weight. The sometimes-complicated mechanisms involved in retracting and extending the undercarriage—while preserving its strength—are heavier than simply bolting on a fixed landing gear. There being no free lunch, maintenance also can be an issue with retractable undercarriages. At a minimum, you’ll pay more for an annual inspection of a 172 Skyhawk when compared to a 172RG Cutlass. And, of course, there’s what can happen when something in the retraction/extension mechanism decides to go on vacation: a gear-up landing.

All retractables have some sort of emergency gear-extension system. On the Piper Arrow, a valve is opened, removing hydraulic pressure and allowing the gear to free-fall into the down-and-locked position. Usually. Retractable Cessna singles and the 337 have a manual hydraulic pump. Beech Bonanzas/Barons employ a manual crank mounted low and behind he front seats.

And, from time to time, manufacturers have toyed with automatic extension and retraction systems. Piper’s Arrow is the poster child for such, but similar systems also were installed on many Beechcraft products.

Riding It out
We’ve necessarily omitted many undercarriage designs from this discussion—including castering main gear, outriggers, single-wheel designs on gliders, tandem-wheel designs like on the B-47 and B-52, and the four-wheel systems on conventional airplanes equipped with amphibious floats.

The bottom line? You may encounter any or all of these undercarriages in your flying career and it’s a good idea to become familiar with their characteristics, features, drawbacks and procedures. To learn more about how your aircraft is configured, spend some quality time with the manuals.