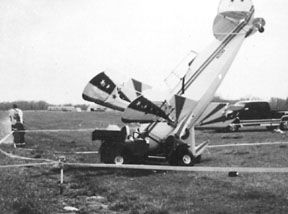 Heres a news flash: There is no such thing as a perfect flight. Every pilot is forced to examine the airplane he is about to fly, his own skills and the demands of the mission, and make judgment calls about the risks involved and how to minimize them.

Sometimes the calls are easy, with the intended flight well within the limitations of the airplane and pilot or so far outside those capabilities that a decision is black and white. Most times, however, the choice requires not so much a go/no-go decision as an analysis of where the pitfalls of the flight might be.

In those cases, a pilots experience leads to certain assumptions, for better or for worse. Just as you may expect an airplane youve flown many times before to be capable of handling a particular short-field takeoff, so may you be surprised one day when underinflated tires slow down the takeoff roll enough that those trees at the end get perilously close.

Its the assumptions that prevent a veteran pilot from wilting under the information overload that so often overwhelms inexperienced pilots. But it can sometimes happen that those assumptions spell disaster.

On a fine spring morning, the owner of a Pitts S-2A aerobatic biplane went out for a jaunt from Mattoon, Ill., to nearby Shelbyville, 27 miles away, to practice landings on Shelbyvilles well-manicured turf runways.

As any Pitts pilot will tell you, the airplane spits and snarls and slashes its claws when its on the ground – in stark contrast to its precise handling in the air. Flying a Pitts can inspire faith in a Chinese proverb: He who rides a tiger is afraid to dismount. Landing on grass is one way to tame the tiger, and many Pitts pilots prefer turf to concrete whenever possible.

Turf runways have their own shortcomings, however. Runway edges can be hard to see, because most grass runways do not have runway edge lights. And although mowing and use can carve a runway out of a field, turf runways are often mere approximations when compared with their paved brethren.

Shelbyville, however, has two well-maintained grass runways to go along with its single paved runway. Runway 14/32 is 3,264 feet long and 200 feet wide. Runway 4/22 is 2,585 by 200, although nearly half of that length is interrupted by two paved taxiways.

On this Saturday, the winds were from 180 at 6 knots, favoring 14. The commercial-rated pilot of the Pitts came in on a left downwind for 14. He announced his position upon entering downwind but got no response. He noted a Waco Taperwing touching down on 14, and shortly afterward he announced a turn to base. He called the turn to final, then determined the Waco was not clear of the runway and might not be by the time he landed.

Spotting the Waco on the runway was something of a feat. From the rear seat of a Pitts S-2A, the view straight ahead is poor at best. The airplane requires steep descents to get any forward visibility at all of a runway. Most pilots make the turn from downwind to runway threshold as one continuous curving descent. On the flare the pilot must judge alignment and height with peripheral vision only.

The Pitts went around for another try.

On the go-around, the pilot again announced each leg of his pattern on 122.8, the CTAF frequency. He got no response until announcing the turn from base to final, when the pilot of a Piper Tri-Pacer called on downwind.

The pilot said the rest of the approach and flare was normal, with the airplane touching down in a normal three-point configuration. After a few seconds of rollout, the aircraft impacted an unseen, unknown object and came to an abrupt stop, the tail up about 45 degrees and [the airplane] sitting on the nose and right wingtip. I still could not see what the airplane had hit, the pilot later said in a written statement to investigators.

Meanwhile, on the Grass
Hanging out at the airport that morning was a 66-year-old woman shepherding four young children and a 46-year-old woman who was waiting for an airplane carrying her son to fly into the airport. The younger woman had a puppy with her, and the kids and the two women were outside, enjoying the pleasant sunny morning.

The older woman was married to a man who had been trading sweat for flight time at the airport. For more than two years, the man had mowed grass, sprayed weed killer and done other jobs around the airport in exchange for flight training and maintenance work on his airplane.

As the two woman talked and the children played with the puppy, the Pitts arrived and made its go-around. The older woman, an airport veteran, remarked that her son must be arriving and showing off for her.

As the Pitts lined up for its second approach and descended toward the grass, the older woman said the airplane was way off the runway. Panic mounted in her voice as she screamed that it was about to hit her husband.

The womans husband had been spraying weed killer on the runway edge signs. He was off the left side of runway 14, past its intersection with runway 22. He drove a green golf cart away from landing traffic, oblivious of the approaching airplane.

The Pitts came to rest on the golf cart, 430 feet from the initial point of touchdown. The airplane was stopped on runway 14, five feet from the edge.

The driver of the golf cart was thrown about six feet and lay on his back. The pilot of the Pitts turned off the electrical system and fuel and scrambled out of the wrecked biplane.

He ran to the side of the injured airport worker and said, Im so sorry, sir. I didnt see you. I am so sorry.

The two women who witnessed the accident called 911 and the younger woman and another witness rendered what aid they could, with the Pitts pilot kneeling at the mans side, holding his hand and encouraging him to breathe. The paramedics were there in minutes and the ambulance screamed toward the hospital.

Almost unseen in the commotion, the airplane carrying the younger womans son landed on the paved runway. The victims wife, gracious despite her shock, said, Thank God it wasnt your son.

Later, the grim news came from the hospital; the golf cart driver had died from his injuries.

The NTSB also concluded that the airport manager should have issued a Notam that workers would be present adjacent runways, but its hard to see how that could have had an impact here. On a beautiful VFR day, the pilot had gotten his weather information via the AWOS at his home field, and had talked to no one on the short flight from uncontrolled field to uncontrolled field.

The pilot had accumulated more than 900 hours of single-engine flying, including 40 hours in the previous 90 days. He had logged 64 hours in the Pitts, but it had not been his first Pitts.

Investigators pointed to an accident 11 months earlier in which he had ground-looped an amateur-built Pitts S1, collapsing the left gear, damaging a wingtip and striking the propeller, but given the ground handling characteristics of the Pitts, such a record among even seasoned Pitts owners is not that unusual.

The NTSB pinned the accident on the fact that the golf cart was unmarked and not equipped with a radio. It blamed the airport operator for not issuing a Notam. It blamed the pilot for missing the runway.

In fact, the root cause of the accident was the set of expectations being carried that day.

The pilot expected the area to be clear. The airport operator expected the golf cart to be out of the way of airplanes. The driver of the cart expected that this day of spraying weed killer would be like any other.

By knowing what can go wrong, pilots can be better armed to prevent accidents. A pilot who knows the forward visibility of the airplane is terrible is under a greater burden to scan the area and pick precise landing points – or else go around again.

An airport operator who knows a worker will be driving around on grass knows the vehicle should contrast with the terrain, not blend in.

A driver who knows theres no radio should operate near the runway only when facing incoming airplanes rather than driving in the same direction.

The tragedy of this accident is that it would have taken so little to stop. But that small dose of vigilance was a casualty of the experience – and the expectations – of the people involved.