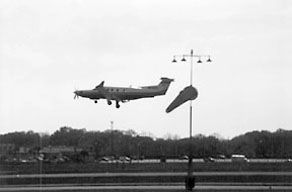 One of the most basic tenets in aviation is that an airplane ought to take off and land into the wind. Yet each year the accident statistics show that some pilots refuse to follow this basic rule. And each year the tailwind factor results in bent aluminum, injured passengers, or worse.

Right off well acknowledge that there are occasions when a downwind departure is necessary. For example it is quite common due to ATC traffic flow and airport congestion at large terminals such as JFK, LaGuardia, Teterboro or Washingtons Reagan National. Then there are airports such as Aspen, Colo., with a mandatory downhill departure on runway 33 – often with tailwinds – due to surrounding terrain.

Even when everybody else is doing the downwind thing, remember that there is a limit to what you can accept. A downwind departure or landing requires careful consideration. Transport and commuter category airplanes have limits specified by their certificates. Conversely general aviation aircraft have no defined limits.

If the headwind velocity is 50 percent of the takeoff speed, then takeoff distance is reduced 75 percent. Theres no reference available for a 50-percent tailwind factor, but we can assume it exceeds a 75 percent increase in landing distance also.

You may not find those numbers in the POH, however. For example, the Cessna for Cessna singles from the 1980s on suggest adding 10 percent for every two knots (for a 152) or 2.5 knots (for a T206) of tailwind component, further lengthening the runway required. Older Cessna books dont address how tailwinds affect takeoff or landing performance at all. Piper handbooks ignore the headwind component until the late 1970s, when they add data into the charts for a tailwind component up to five knots.

The Cessna 421 POH advises increasing takeoff distance 5 percent for each two knots of tailwind. Thus a 10-knot tailwind increases the runway requirement 25 percent. A 20-knot tailwind runs it out to 50 percent more runway.

When the runway has a notable slope the wind factor is still paramount. An uphill or downhill slope only increases or decreases take off or landing distance 2 percent to 4 percent per degree of slope, depending on aircraft type. Consequently it is always better to ignore the slope and takeoff and land into the wind, unless surrounding terrain is the mitigating factor rather than runway slope.

Why and When?
Tailwind operations are not that uncommon, particularly in the spring when the winds are shifting. Towered airports take time to shift runways, particularly when there are IFR arrivals involved. If the controllers feel the wind shifts are manageable, or that averaged over time they tend to favor one runway, its easy to get a tailwind when the ATIS is saying just the opposite.

However, ignoring the aerodynamic rules can come with peril attached.A classic case involved the new owner of a Piper Lance. During training for his private certificate, instructors reported he was headstrong and resistant to instruction. He wanted to learn things his way and didnt want to mess with what he didnt think hed need. The DPE who issued his certificate six months earlier was part-owner of the FBO and a good friend of the pilot.

This impatient private pilot always departed from the closest runway, regardless of wind direction, and this was ultimately his downfall. One day he departed with a 40-knot quartering tailwind. Witnesses heard the tires squeal as the airplane departed the side of the runway. Although an abort was in order he kept going.

He failed to get airborne and was killed in the subsequent crash.Another involved the judgment, decision-making and command authority of a flight instructor on board a Cessna 172. It also shows what can happen when pilots stop thinking for themselves.

This accident occurred at Sussex Airport in New Jersey in 1999. The 27th annual Sussex airshow had just ended and the Cessna 172N was headed for Republic Airport at Farmingdale, N.Y.

In the left seat was a student pilot with a total of 37.6 hours, all dual instruction. The flight instructor, with approximately 3,244 hours, was in the right seat, with another of his students in back.

Both during the airshow and upon departure the warbirds used runway 3. After the show several airplanes began taxiing for departure on runway 3. Then someone stated on the Unicom frequency, Runway 21 will be used for departures. This is the FAA. Although there were FAA representatives at the air show, they said they departed 10 to 15 minutes before the accident and did not make any announcements on the Unicom frequency.

Several witnesses reported the wind was essentially a direct tailwind, estimated at 15 to 20 knots. The nearest airport with a weather reporting station was 40 miles away, where the winds were reported as from 340 at 10 knots, gusting to 19.

The accident report showed the runway as 3,499 feet long (now shown as 3,510 feet). Still, despite the stiff tailwind most of the airplanes taxied dutifully to runway 21. No one protested the move over the radio, although some pilots waited to depart until it was possible to use runway 3.

Several witnesses told investigators that the winds were predominately from the northeast. An individual who lived on a hill nearby said that about 15 minutes before the accident the winds began to swirl and became unusually strong and violent.

The pilot of a Cherokee Six told investigators that the wind was strong and blowing straight down the runway. He noted that others were having difficulty climbing and just missed the trees off the departure end. He acknowledged that he too departed runway 21 and also came dangerously close to the trees.

Another witness observed several airplanes depart runway 21. He reported that all used about three-quarters of the runway and were struggling to climb.

Finally the Cessna 172N departed from runway 21 and it too was seen struggling to climb. A commercial pilot who witnessed the accident estimated a 20-knot tailwind. He said the airplane was pitched about 30-degrees nose-up when it mushed into the 60- to 75-foot tall trees 200 feet from the end of the runway and flipped forward into the ground. All aboard were killed.

Although its easy to lay blame at the feet of the flight instructor, every departing pilot who acquiesced to this downwind departure was guilty of failing to act and think like a pilot in command. They allowed themselves to be herded like sheep by an anonymous voice on the radio into a very dangerous situation.

Barring certain mitigating circumstances, an airplane should take off into the wind whenever possible. When the tailwind is 20 knots, taking off under any circumstances borders on the irrational.

A non-towered field is uncontrolled. Unicom is a non-government aeronautical advisory station, with no authority to control traffic. Thus the best runway for takeoff is an essential PIC decision – and thats true everywhere, even at a major metropolitan airport. While it may cause an hour-long delay at Los Angeles International, LaGuardia or JFK, you cannot be required to depart with a tailwind exceeding your airplanes limitations. Runway length and takeoff distance are the other major considerations.

Another aspect of the Cessna 172 accident is that to avoid the trees the instructor in the already nearly-stalled airplane allowed it to be pulled into a reported 30-degree pitch attitude. Even giving the witness some room for exaggeration, this implies blind panic. The subsequent stall sealed the fate of all aboard.

Rationalization Time
Another tailwind accident occurred during landing. This time the airplane was a corporate-owned Falcon 900, landing at night at Barnstable Municipal Airport in Hyannis, Mass. Weather reported before the accident showed winds from 040 degrees at 20 knots, gusting to 33 knots. Visibility was given as a half mile in snow and freezing fog. The ceiling was 900 feet broken, 1,400 feet broken, and 2,000 feet overcast.

The ILS to runway 15 was in use. The Hyannis ATIS information Mike stated, Braking action poor; reported by a Cessna 402. Both runways were reported covered with a patchy thin layer of snow and ice.

Perhaps telling was an earlier statement the captain made to the first officer: We should not inconvenience our passengers because of our (weather) problems.

Because of the wind, the Captain first considered a VOR approach to runway 6, but the ceiling was below VOR minimums. He considered runway 15, but he felt the quartering tailwind exceeded the airplanes Certificate Limitations. The first officer checked weather again with the tower. They were given winds from 020 degrees at 26 knots gusting to 34.

The cockpit voice recorder documented the captains efforts to rationalize the effective tailwind to within the required 10-knot limitation. During one of several queries the Tower gave the winds as 010 degrees at 22 knots. However the record showed it was still gusting to 34 knots.

The captain seized on the report and said, Thats got to be less than 10 knots, okay? Not only was he ignoring the gust factor, but a wind component chart shows the effective tailwind even using this optimistic report was 15 knots – still greater than the Falcons 10-knot tailwind limitation.

Without checking the captains quick estimate, first officer acquiesced, saying, All right, Ill buy that. On short final the first officer stated, I dont like it. Four seconds later they touched down 2,500 feet long and consumed another 1,500 feet before the thrust reversers deployed. At that point, they had only about 1,200 feet of runway left.

The captain told investigators he touched down and applied maximum reverse thrust and braking and called for air brakes. As the airplane rolled down the runway he noted the lack of braking effectiveness but decided to ride it out to the end instead of going around.

It is easy to sympathize with the captains desire to please the passengers. That is, after all, what he is paid for. However he is also paid to provide a safe ride, and safety simply has to be the first priority. In this case he attempted to rationalize away the tailwind and decided to take a chance rather than use sound conservative judgment gained from good training and 13,200 hours of flying.

The first officer shares the blame. He provided the captain with neither reasoned responses nor good aeronautical judgment. And both crew members should have deduced poor braking action from the report of snow falling and freezing fog. Then, after landing long, they discovered the runway was slick and failed to go around.

Tailwinds are great in cruise flight, but when it comes to operations around a narrow strip of concrete or grass, they whittle the safety margin and demand uncommon skill to handle. While most pilots can safely handle a light tailwind component at most airports, too often they are lulled to complacency by other pilots, the tower, or operational efficiencies. Pay attention to the wind direction and velocity. And dont let misplaced confidence in your piloting skill take you to the scene of an accident.

Also With This Article
Click here to view “The Fine Print.”