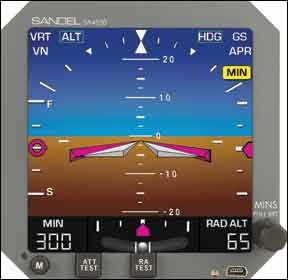 Fly a jet or turboprop airplane and youll consider a flight director to be an essential tool for precision and aircraft control. Turbine-powered airplanes are generally very powerful and slick, so being off as little as a degree in pitch attitude can quickly lead to an altitude bust. Fly a jet up high, where indicated airspeed provides only a small margin above one-G, wings-level stall speed-the so-called “coffin corner”-and a flight director provides the precise guidance you need to keep the wing flying.

You may be new to turbines and just becoming acquainted with flight directors.

Many of us who fly piston-powered airplanes also have flight directors as integral parts of an autopilot system. But the system isnt well understood by many pilots, especially those not yet fortunate enough to be flying turbine equipment. What is a flight director, what does it do for the pilot and how can it best be used?

Telling You Where to Go

Why might we want this level of system guidance? Flown correctly, the flight director makes it easy to be extremely precise with pitch and bank. It tells us whether we need a small change or a larger change to get back on target; it commands changes in bank angle and/or pitch attitude that lead rolling out of turns or leveling off on a selected altitude. While when hand-flying using “raw data” (no autopilot or flight director) the flight instruments provide information on current attitude and trends, the flight director adds the dimension of predicting where you are relative to desired altitude, attitude, heading, courseline and glidepath, giving you instructions on how to merge your current state into the desired flight path. In an IFR world where we strive for smoothness and precision, a flight director makes it even easier to hit our altitudes, headings and course guidance exactly.

The command bars will indicate the pitch attitude and bank angle needed to follow the navigation guidance its referencing. Keep the aircraft symbol wedge in the notch of the command bars inverted V and the airplane is following the flight directors commands.

The aircraft symbol is usually orange, the command bars yellow. When I first learned about flight directors in the late 1980s, many instructors referred to the aircraft symbol as the “Howard Johnsons roof,” but unless you spent a good part of the 1960s on the interstate highways in the back of your fathers Plymouth Fury III station wagon, you might not get the Howard Johnsons reference.

Older style flight directors employed a two-needle indicating system that looks just like a VORs localizer and glideslope presentation, but superimposed on the attitude indicator. The vertical needle indicates whether you need to hold heading, turn left or turn right, and the horizontal needle shows whether holding pitch attitude, pitching further up or further down will follow your present vertical guidance. I flew a 1977 Beech Baron with this presentation, shown at bottom left, for several years and, frankly, didnt like it. Consequently, I almost never used that airplanes flight director.

The whole idea of the flight director is to remove some of the interpretation needed to fly with precision. Its ironic, then, that when you first learn to use a flight director you will probably notice an increase in your workload before you begin to realize its benefits. Adding the flight director to your instrument presentation actually adds to the tasks you must complete, because you need to program and activate the FD in addition to everything else youre doing to fly the airplane.

Whats even worse is that, if you do not program the flight director properly for every single change of altitude, heading or navigation reference, it will indicate something other than what you need to fly because it will be directing you back toward the last heading, altitude or attitude you had dialed in.

My most common experience when demonstrating flight director use is that the student doesnt keep up with the required FD inputs, especially at high-workload times like a missed approach. The pilot then finds him/herself trying to ignore the incorrect commands of the flight director, looking through the command bars to fly “raw data.” This conflict between required attitude and flight director indication can be very distracting.

Learning to use the flight director, then, is an exercise in workload management.

If youre a good instrument pilot, you already know about making small control inputs for precise pitch and bank control. Youll still need to do this when using the flight director. It takes a lot of initial practice, and then frequent use of the flight director, to be able to effortlessly include keeping the FD programmed ahead of the airplane, instead of making changes using raw data and then programming the FD to keep up. Once you attain this skill, however, and keep it current with frequent practice, youll find using the flight director helps you fly even more smoothly and precisely.