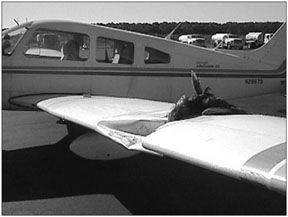 As pilots, we sometimes take for granted that we are able to soar with eagles. In reality, were simply joining the legions of other animals that also fly. Think about it-most animals do fly, even if were only talking about warm-blooded vertebrates such as birds and mammals. Almost 80% can take to the skies, including almost 1000 species of bats and roughly 9000 species of birds-compared to the remaining 3000 species of other mammals. By contrast, only one person in every 5000 can actually pilot an aircraft, so the ability to fly for most animals is the rule rather than the exception.

But problems arise when man and animal try to occupy the same airspace at the same time. For example, at least 138 people died worldwide from bird strikes from 1990-2002 and collisions between aircraft and wildlife caused mean annual losses of $479 million to U.S. civil aviation in 1990-2001. At least 294 strikes by birds weighing four pounds or more caused substantial damage to civil aircraft in the U.S. in the period 1990-2002. Thirty percent of these events involved multiple birds. More than 6022 strikes occurred at 1000 feet AGL or higher (see the chart), of which at least 1986 (33%) involved four-pound or heavier birds.

In recent years, three factors have synergistically worked to increase the problem of wildlife strikes in North America. First, populations of many species hazardous to aviation have increased and adapted to airport environments. Second, commercial air traffic increased at an annual rate of 2.6% from 1980-2000. Third, modern aircraft are faster, quieter and less apparent to birds than older ones. And Transport-category aircraft are certificated to higher birdstrike-tolerance standards than most personal airplanes. For example, airworthiness standards for those airframes, windshields and engines, including shielding of important aircraft systems to ensure aircraft can operate safely in the event of a strike.

Still, birdstrikes take a toll. As one consequence, the NTSB in 1999 issued nine recommendations designed to reduce the threat of wildlife strikes. These recommendations include more research in methods to repel birds from airports, using radar to warn pilots of bird concentrations, developing wildlife hazard management plans for airports, mandatory bird-strike reporting and improving interagency cooperation on issues involving aviation and wildlife. Research and development efforts are underway in each of these areas.

The Danger Zone
About 71% of bird strikes to civil aircraft occur below 500 feet AGL. Thus, implementing programs to reduce bird populations in airport environments is essential to minimizing bird strikes. However, given the diversity and mobility of avian species, programs to manage bird hazards at airports will never exclude all birds from aircraft movement areas and will do nothing to prevent strikes outside the airport environment.

Aggressive programs by natural resource and environmental organizations during the past 30 years (e.g. pesticide regulation, expansion of wildlife refuge systems and wetlands restoration), coupled with land-use changes, have resulted in dramatic increases in populations of many wildlife species in North America and Europe. In addition, certain of these wildlife species that are a proven threat to aviation, such as the Canada goose, have adapted to urban environments, making the risk of wildlife strikes at airports much greater.

Other characteristics of these species pose dangers to aircraft. For example, 24 (67%) of the 36 species identified exhibit strong flocking behavior; five (14%) of these species regularly exhibit soaring behavior, thus becoming a hazard at altitude, far away from an airport.

As proof that these larger birds frequently collide with their mechanical kin, 21 of the 36 species were identified as involved in a total of 1234 reported strikes with civil aircraft in the U.S. from 1990-2002. In addition, there were 561 strikes reported that involved four-pound or heavier birds (i.e., geese, vultures, eagles, pelicans, swans, cormorants, albatrosses, cranes and loons) in which the species was not identified. In these 1795 reports of strikes with four-pound birds, 894 (50%) resulted in damage; 294 (16%) caused substantial damage to the aircraft.

Multiple Birds
This data clearly indicates that the aviation industry needs to reexamine existing airworthiness standards with regard to bird-strike tolerances. Many of the regulations have not been revised since the 1970s when large-bird (i.e., greater than four pounds) populations were much lower. Of particular concern is that existing standards for Transport-category aircraft regarding large birds (in most cases, four pounds being the maximum tested) do not consider multiple-bird strikes. Yet, data for 1990-2002 indicate 30% of strikes with birds heaver than four pounds and 39% of strikes with birds weighing more than eight pounds have involved multiple birds. The fact that current large-bird standards for engines only require that the damage be contained and that the engine can be shut down safely has serious implications for multiple-bird strikes.

Reducing The Potential
Even if airworthiness standards are revised and engineering improvements are made, it will be impossible to completely bird-proof engines and airframes against high-speed collisions with birds of large mass or in large numbers. Yet, changes will do little to help existing aircraft survive such strikes.

Because of increasing industry concerns, an FAA/European Joint Aviation Authority (JAA) working group has proposed a new standard requiring future large engines to demonstrate 20 minutes of run-on capability after ingesting an eight-pound bird. Population increases of these large birds should be factored into risk analyses regarding civil high-speed (over 250 knots) operations below 10,000 feet.

Previous research has indicated that birds are less able to avoid quieter, modern jet aircraft than they are older, noisier aircraft. With quieter aircraft in operation today, new technologies are needed to enhance the visibility of aircraft to birds. In addition to the many programs in place at and near airports, another potential means of reducing strikes with large birds involves enhancing sensory cues emitted by aircraft that are relevant to birds (e.g., light at certain pulse rates or wavelengths). Research into the behavioral response of birds to approaching aircraft and avian vision may lead to practical methods of enhancing the ability of birds to avoid aircraft.

In addition to the steps outlined in the sidebar below for pilots to use in avoiding birdstrikes, airport operators must exercise due diligence in managing wildlife hazards to avoid potentially serious accidents. This should involve assessing wildlife hazards at the airport and, if needed, implementing a wildlife hazard management plan as specified by the FAA in FAR 139.

Wildlife hazard management at airports is a complex, public-sensitive endeavor involving many species of wildlife and is governed by various federal and state regulations. As a result, even smaller airports need to employ professional biologists trained in wildlife damage control to assist in developing, implementing and evaluating wildlife hazard management plans. Professionally developed and implemented management plans will minimize the likelihood of catastrophic or major-damage wildlife strikes.

Finally, aviation regulatory agencies worldwide should develop and maintain rigorous standards for airport-based bird-hazard management programs. Aggressive management programs at airports carried out by professional biologists have been successful in reducing strikes. In addition, the deployment of bird-detecting radar systems to alert pilots and ATC personnel may also prove useful in avoiding strikes with large flocking birds, especially during periods of migration.