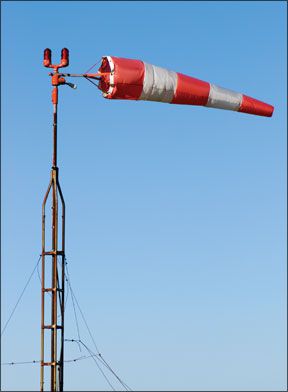 “Approach, seven-three Pop; copy the winds…guess well keep up the pace a bit.”

When first sitting down to assemble this article, my initial thoughts turned to my logbook. Inside it are more than a few notations about such not-unusual days; the controllers welcome in this one made me chuckle. At almost the same instant, the

sound of 30-knot gusts rattling the trees outside my office focused my attention on the days local conditions-an environment offering abundant signs that any flying means dealing with gusts.

My familiarity with gusty conditions started developing during my primary training. A regular part of my time-building solo practice involved August afternoons hopping among five Wichita-area fields. Typically, those hot summer days and nights brought winds blowing hard, in the teens to low 20s, and usually gusty-as much as 20 knots above the mean. For much of that month gusty winds served up a significant challenge for a student pilot armed only with a Cherokee 140 and determination. Hey, its Kansas.

But, in reality, it can be anywhere.

Learning To Live With Gusts

The likely prospect of a close encounter with gusty conditions-at takeoff, while en route or on approach-makes familiarity and comfort with gust strategies a worthy pursuit, even a survival skill. Wind, per data from several sources, contributes to a significant percentage of landing and takeoff accidents which, in turn, make up an average of about one-quarter of all accidents.

My CFI believed in using gusty days as learning moments, both for learning to handle the conditions

and for the importance and the experience of deciding whether to fly in the first place. Learning to read the signs, he felt, carried an important equal to deciphering a printed forecast or verbal briefing. As a result, my attitude became the same as his: Watch for the visible signs, sense the tactile feedback from the plane, determine the correct speed for the conditions and learn to work with the airplane to survive the air. Youll be less likely to bend something because of gusty conditions.

Besides, as he told me and other students, waiting for calm Kansas days-with “calm” meaning seven knots or less-can adds weeks or months to the primary training process before earning a ticket.

While such conditions may be far less frequent elsewhere, days of pronounced gusty conditions happen everywhere at some time or another. Knowing when to expect and how to handle gusts builds confidence and broadens your safety margins.

Gusts: Where You Find Them

Near the ground, gusts can be deadly as they challenge your control. The margin for error decreases with the distance from objects and runways. In cruise flight at altitude, the margin between an intact airframe and structural failure easily can be eliminated if the aircraft is not operated in a manner appropriate to the conditions.

As with so many other weather phenomena with which pilots must contend, gusts originate with the uneven heating of the Earths surface, manifested in frontal passages, along highs or lows or from hot, rising air. Obstacles-hangars, other buildings, tree lines-can contribute to turbulence, also, having an operational impact much like gusts for the pilot “lucky” enough to encounter them.

Theres little reason any pilot should be surprised to encounter gusty conditions. Opportunities abound to learn and prepare for such conditions, and can start with the call to our favorite aeronautical assistants at Flight Service. Winds and gusts should be a part of your weather briefing.

For those who eschew calling FSS, the standard Terminal Aerodrome Forecast (TAF) and the Aviation Routine Weather Report, or METAR, available via a number of sources (like Duats or Datalink) also provides data on winds-direction, average velocity and maximum observed gusts.

Other indications can be more subtle but no less useful. For example, look at the isobars on a weather map, which indicate changes in barometric pressure. If there are many of them nestled together over a relatively small area, its usually a good indicator of strong winds-and gusts often accompany strong winds.

Even more fundamentally, using the Mark 1, Mod 1 eyeball for personal observation offers not only increased awareness but greater experience. Wind socks that jerk and whip around or suddenly and dramatically change direction-up to and including a 180-degree reversal and back again-should be taken as concrete signs of gusty conditions.

Lacking a wind sock, tree tops, vegetation like tall grass or weeds and even birds in flight provide other hints at the wind conditions, even if these telltale signs lack objective specifics like velocity. Often, these indicators can be observed well before arriving at the airport.

Regardless of the source, gust indications should be attention getters.

The Price of Failure

Checking a variety of sources shows that takeoff and landing accidents account for an average of about one-quarter of the totals going back several years. Other stats show that about 15 percent of those takeoff or landing events had winds as a factor.

The accidents often stemmed from pilots simply flying too slowly for conditions and suffering for their transgressions-being blown sideways off the runway, dragging a tip and cartwheeling because of insufficient control-or an inadvertent stall when set up for high gusts and the gusts stopped or, worse, and left the pilot with a deficit of altitude, airspeed and options.

Other times, pilots tried to use “a little” extra speed but either used too much or misjudged the resulting touchdown point and ran off the runways far end. In one case the pilot employed a normal approach slope and speed, only to have a gust change the wind direction. The plane ended up short of the runway in a tree line. The price paid for improperly handling gusts varied widely-from simple, ultimately harmless embarrassment to the ultimate price, though fatalities in these accidents were remarkably few. But it doesnt have to be that way.

Gusty conditions aloft usually manifest themselves as turbulence-a rough ride-ranging from mild to moderate to severe and to extreme (see “Smoothing The Bumpy Ride,” June 2008

When turbulence arrives, the airplane can suddenly feel like a bicycle on a rough road and, as conditions deteriorate, the airspeed needle starts to dance up and down like an elevator unable to decide which way to go. Beyond the work of controlling the airplanes attitude, times like these call for minding that airspeed needle and keeping it appropriate for the conditions.

For example, if youre cruising up in the yellow arc, you should consider at least slowing to at or below Va, your aircrafts design maneuvering speed. As defined by the FAA in FAR 1.2, Va is the speed below which full-deflection movements of the control surfaces wont damage the airframe. That should suffice for light or mild turbulence.

For conditions more severe, where that airspeed needle or digital indicator is doing its best ping-pong ball impression, the plane should fly at no more than Vb. Per FAR 1.2 again, Vb is defined as the design speed for maximum gust intensity and is a recommended severe (up to 50 feet/second) turbulence penetration speed. For most light aircraft, its unlikely Vb will be specified as there is no requirement in Part 23 for manufacturers to publish it. Regardless, its fairly close to Va anyway.

Remember, too, these airspeeds are maximum values computed for the aircrafts highest weight. At lower weights, both Va and Vb, if available, must be reduced accordingly. Finally, in part because they vary with weight, they are not marked on the airspeed indicator. Research your aircrafts placards and the POHs limitations sections for more details on what this speed is and when.

Irrespective of what is the appropriate turbulence-penetration speed for your aircraft and how its determined, flying at it or slower should assure no damage from more dramatic gusts, up to the defined vertical speeds, in part because the change happens too quickly for the pilot to make max-deflection control changes of the kind flying at Va protects the airplane against. But above Vb, even rapid, partial control deflections put the plane at risk for damage.

For more details on the relationship between aircraft speed, gust velocity and structural integrity, see the sidebar on page 9.

Knowing your planes limits and how speed can impact the load is important to protecting yourself and your plane in conditions of severe vertical gusts. For example, simply reducing speed in severe gusty conditions helps protect the airframe from encountering vertical gusts capable of exceeding the birds load limits.

The current gust-envelope standard in newly certificated airplanes is 25 feet per second (fps) and 50 fps for vertical gusts, which approximate 15 and 30 mph vertical velocity changes. Older airplanes were built to a standard calling for a gust envelope of 15 fps to 30 fps vertical-about nine and 18 knots, respectively.

Where gusts exert their most dangerous threat is when were either launching or landing. Low and slow cuts into your response window and your margin for change. So, like good pilots we adjust by widening the window to something closer to normal-we increase our approach speed.

The goals differ little from the goal on an otherwise “normal” day-a smooth, safe, great landing…well, as smooth as possible-and always ending with the ability to reuse the airplane. Achieving this goal has a second benefit: advancing your comfort and proficiency at handling a gusty day.

All this means, thirdly, getting out on some challenging days and going spinner-to-nose with some gusts. Practice on such days breeds the competency and experience you want, saving that entry in your logbooks remarks section for other stuff. The goal is to build skills and set some personal limitations.

So, first, get out and practice some on gusty days, with a CFI if necessary, to help you with technique. That said, practice will never make handling gusts perfect-the best you can hope for is consistency. After you achieve consistency, encountering gusty days wont be as daunting at the end of that long cross-country.

Learning to handle gusts also helps you find where you and the airplane reach your mutual limits. The area between that point and a smooth day defines your comfort zone. Use that comfort zone wisely.