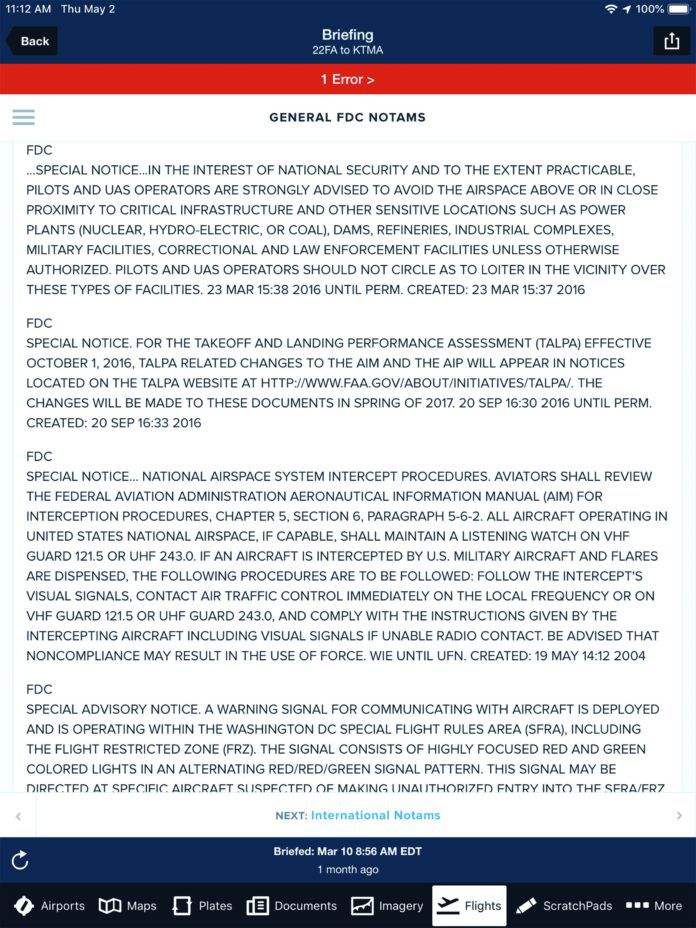 From navigation and communication outages, to runway closures to misprinted charts and to identifying every structure in your county over 200 feet high—in other words anything new that could affect the safety of flight, you’ll likely find in a Notam.

Automation also has changed the way we can process Notams during our flight planning, and old distinctions between local and distant Notams have blurred. Not so the FDC Notam—named because of its source, the FAA’s Flight Data Center—which can be regulatory in nature.

The sheer quantity of Notams, plus their user-unfriendly all-caps format riddled with abbreviations, have from time to time sparked calls for fundamental changes, including on the floor of the U.S. Senate. Plain-text translators work well but there’s still a lot to reject or consider when becoming familiar with “all available information.”

One way to deal with this torrent of poorly presented information is to call Flight Service, ask for an abbreviated briefing and query the briefer about Notams for your proposed flight, and especially if there’s any new FDC Notam affecting the airspace or procedures you anticipate. Listen to the briefer; there might be some nuggets you didn’t know about. And at least you’ll be on the record when FAA’s enforcement apparatus asks you about a TFR bust. —J.B.

Why File a VFR Flight Plan?

A good reason would be for a cross-country flight over rural terrain such as over the Rocky Mountains or if you plan to fly over an unfamiliar area. A VFR flight plan guarantees search and rescue services while flight following alone may not. Search and rescue will be initiated 30 minutes after the arrival time if the aircraft has not been found in the en route environment. With the benefits of technology, Flight Service may even be able to send a text message to remind you and confirm that your flight plan is closed. Take advantage of all the services provided to you, and don’t forget to close your VFR flight plan, by calling or logging on.

At top right is a sectional excerpt showing the Wink (INK) Vortac, and the frequency box, which lists 122.05 as a discrete frequency for contacting San Angelo Flight Service in the area around INK. The underlined navigation frequency indicates INK itself does not have voice capability on 112.1 MHz. You also can use the universal Flight Service frequency,122.2 MHz.

At bottom is the frequency box for the Anton Chico Vortac (ACH). The text “121.1R” denotes ACH receives voice communication on that frequency and the absence of underlining the 117.8 MHz nav frequency means you listen the Flight Service over the nav side of your radio. Be sure to turn up the volume and select the appropriate nav radio on your audio panel.

Eric Lyn is a private pilot who works as an air traffic controller in Southern California.