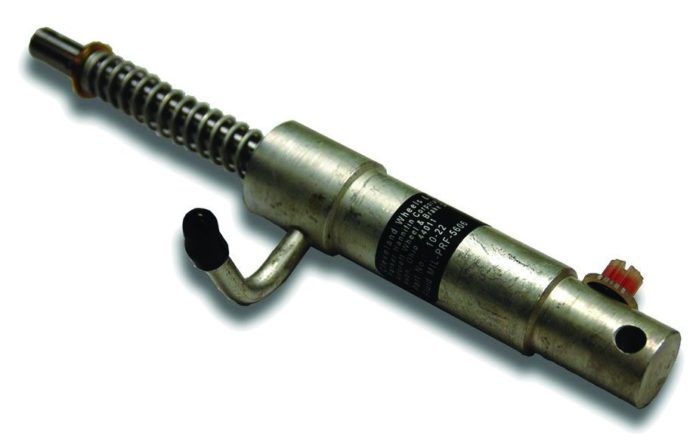 After a brake master cylinder was installed, the technician was unable to bleed the brake system. Fluid pulled from reservoir would return to reservoir through the same line as the internal bypass was not functioning properly. Master cylinder was disassembled and bypass was found stuck and unable to move. Metal shavings were found inside, and an O-ring was torn, with black specks mixed in with the shavings. Part replaced with new master cylinder.

The pilot lost right brake capabilities. Initial examination revealed brake master cylinder piston rod (p/n 0541143) was broken below its clevis check nut (p/n 0541140). Closer inspection found the clevis and check nut to have been bottomed out on the piston rod, causing contact with the right rudder/brake pedal shaft attachment horn. This condition caused the shaft to shear below the check nut and the sequential loss of brake capabilities.

After landing, there was no response when pilot applied left brake. Engine reverse thrust was used to stop the aircraft, and the left brake started working after being pumped several times. Maintenance technicians inspected and troubleshot the brake system and ended up replacing the left brake master cylinder with a serviceable unit. Brakes and master cylinder (p/n 26820011) were bled and ops checks were good.

Pilot reported the brakes were not working well. Maintenance found that the cotter pin, holding the bottom of the brake master cylinder (p/n 1054A) on the pivot shaft, had been sheared off, allowing the brake cylinder to move sideways and bind. The cotter pin (MS24665-24) is extremely light duty and perhaps not heavy enough for the application.

On landing rollout, pilot had no left brake. Left brake master cylinder was removed and the end gland was found with all but two threads unthreaded, causing fluid and pressure loss from the master cylinder. Replaced internal seals, reassembled and reinstalled.