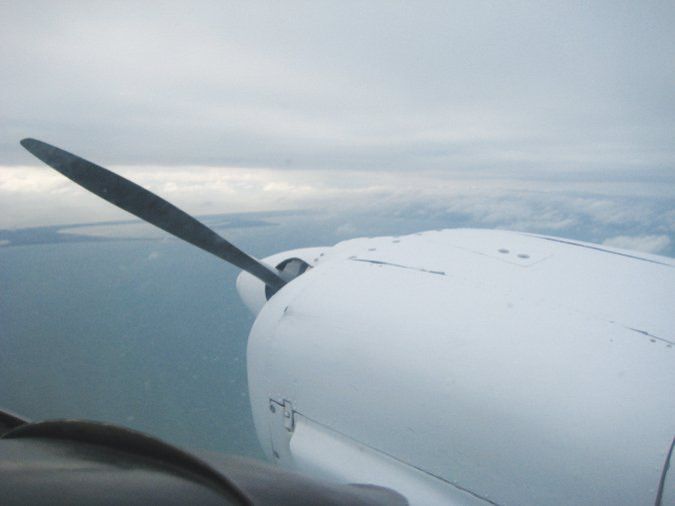 It was a warm, blustery late-spring day in Texas. Visibility was restricted by the haze, and the afternoon’s updrafts were in full bloom. The whole package made the air hot, bumpy and thick. I had a multi-engine checkride scheduled in a few days, so my instructor and I were aloft in the Piper Seneca I that I’d been using and were up to no good, trying to buff out the rough spots. This was for a commercial multi-engine checkride and emphasized instrument work.

Part of the training involves demonstrating what happens to directional control when decelerating through VMC, the minimum controllable single-engine speed, and then recovering. Our one-engine inoperative work while maneuvering involved setting power on the “failed” engine to estimate zero thrust. We shut one down and restarted it “for real,” but only in straight-and-level flight and with plenty of altitude

Soon, I found myself under the hood and in a hold at about 4500 feet msl, with the left engine turning and the right one simulating zero thrust. Gear and flaps were up, and we were indicating slightly above the airplane’s best-rate single-engine climb speed, VYSE. The airplane’s single-engine performance wasn’t that good on a cold day, and I was using almost all available power from the left engine as we motored back to the holding fix. The instructor wanted another lap, so I rolled into a standard-rate right turn as we crossed the fix.

That’s when a strong downdraft began to build. With one eye on the airspeed, I pitched the airplane up to maintain altitude, but the downdraft continued building. We were right on VYSE, then the bottom fell out. The airspeed started down past VMC and the left wing started up, reaching about a 45-degree angle. My hand already was on the good throttle, and I pulled it back to idle and pitched down to get back some speed while rolling wings-level. I added back some power and began to level off. We were flying again.

The instructor gave me back the “failed” engine and said, “That’s enough. Let’s go home. What did you learn?”