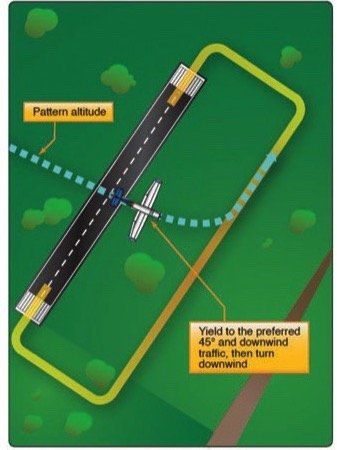 Well, the new FAA advisory on pattern entry (AC 90-66B, “Non-Towered Airport Flight Operations,” Quick Turns, June 2018) is about as lame as they come when it proposes a “safe” pattern entry at midfield at pattern altitude. I thought that the FAA was really concerned about air safety close to the airport, but I guess I was way out in left field, or pattern.

Okay, so what is the Nordo pilot, the missed approach aircraft or the low approach going to do when they get this surprise? This is assuming no one ever misses a radio call, misunderstands the altitude of the mid-pattern entry, or simply is doing everything correctly, but the other pilot crossing doesn’t yield by “not upsetting the normal flow of the pattern,” as noted in the Aeronautical Information Manual for any non-standard entry.

Screw the pattern and do a straight-in on every landing, because it may be the safest entry ever after this stupid proposal. Pilots have enough trouble getting around all the bozos doing all the improper stuff in the pattern already, so let’s just add another entry into your accident prelim pages, as if the FAA and NTSB don’t have enough to do already!

Here in the Northwest and on the best coast, we have a number of non-towered airports near Class B, C and D airports that are busy enough to make their instrument approaches favorites for practicing localizers, RNAVs, procedure turns and holds, so adding another layer of things to hit is just absurd!

Yes, I used my dog’s email address, appropriate for this FAA AC—I think he may be smarter than the FAA!

The right-hand diagram on page 32 (July 2018) depicting an alternate midfield entry when approaching from the side opposite the traffic pattern was (and I believe still is) the standard approach taught across Canada when I began flying over 50 years ago. When approaching from the same side of the traffic pattern, we were taught to enter downwind parallel to, slightly wider and slightly further upwind than usual, rather than the 45-degree entry in the U.S. The preferred entry (left-hand diagram) involves a short period where you are blind to everything that may be happening in the pattern and thus may pose unnecessary risk.

Thank you both for the comments. We’re not aware of any widespread opposition to this new AC, but it’s still fresh. We’ll keep you posted.

Where’s It Say That?

Thanks for Aviation Safety…one of my favorite reads every month! In the “Paperwork” article in August’s issue, I noticed you mentioned that you’re required to have weight-and-balance documents aboard the plane (specifically, the empty weight and balance)…we’re all taught this as part of the AR(R)OW acronym, but I’ve never been able to find it in the FARs. I ask because I actually got this question on my checkride. When I said AROW, he asked me to show him where weight and balance was mentioned in the regs, and happily he was okay with, “I’ve actually never been able to find it specifically. Here’s the citation saying you must perform weight and balance calculations, so I’m not sure it’s actually required. But to be honest, it’s pretty easy to carry so I’d rather just have it in the plane.”.

The closest I’ve gotten is a vague requirement in Part 23 that says AFMs have to have a list of equipment moments (which is different than empty weight and balance) and many planes’ operating limitations require the AFM to be on board; or, that the TCDS could contain that requirement (for the 182 I fly, it does not).

It’s all sort of pedantic, but fun to track this stuff down and learn. I thought I’d ask since you seem to know a lot of this. Thanks!

You’re close. FAR 91.9 requires complying with operating limitations specified in the Airplane Flight Manual. Since weight-and-balance data are considered part of the airplane’s limitations, there you are.