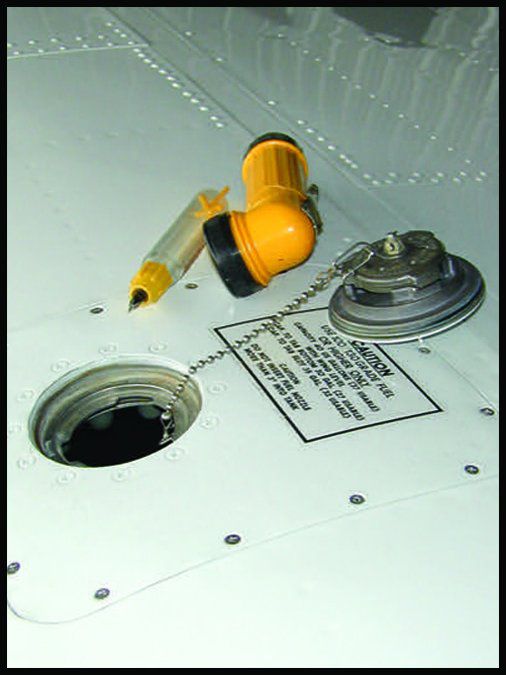 You’re alone in your Lancair Evolution single-engine turboprop. You have just refueled at Chicago’s Midway Airport and are headed to Denver, which your computer says is 788 nm away. The weather is good. The flight planning you’ve accomplished says it will take 3+15 and 121 gallons of the 170 available with the tanks filled. On startup, you reset your fuel totalizer to 170 gallons.

While ATC keeps you down low longer that you would have wanted, you’re soon at cruising altitude and your instrumentation predicts you’ll have 35-36 gallons over the destination airport. So far, so good.

The flight proceeds normally, though ATC gets you down early. The next thing you notice, about when you spot your destination in the distance, is the “Low Fuel Left Tank” alert. Less than 10 gallons in your active tank! Yikes!

On the ramp after landing, the gauge says there are nine gallons in the left wing and 12 in the right, although the totalizer is still promising 35 gallons. The FBO says it took 126 gallons to “fill” the tanks. What happened? Several things:

– The warning light was wrong because the tank sensor is calibrated incorrectly.

– You never had 170 gallons in the wings due to an air bubble and the airplane’s attitude when it was refueled in Chicago.

– The “K-Factor” on your fuel transducer is set incorrectly,

– You underestimated the increased fuel burn at low altitude both at Chicago and Denver.

The airplane has two entirely separate systems to keep track, both of them quite good. The first one is the bar sensor in each wing, which has been calibrated twice and is quite accurate and stable in level flight. The second system simply counts the gallons burned and subtracts them from the total you enter. It’s only accurate, however, if we started with 170 gallons and if the fuel burn is correct.

There are two major reasons and one minor reason the second system can be wrong. First is the K-Factor. Mine was off by seven percent. The other reason is what used to be called GIGO—garbage in, garbage out. It depends on an accurate value of total fuel aboard.

The first problem is line personnel who don’t actually fill the tank, not wanting a fuel spill. Another problem is the ramp isn’t level, so what looks full isn’t. And airplanes with long, narrow wing tanks but not much dihedral are especially susceptible to being difficult to fill.

The bottom line is to be sure what’s in the tank, and that your K-Factor is correct. On my next annual, I am going to completely drain the tanks and then refill them to see what “real-world full” is. Finally, if you have two systems, they will disagree, sometimes significantly. Believe the pessimistic one. You don’t want to be the guy in the cornfield.