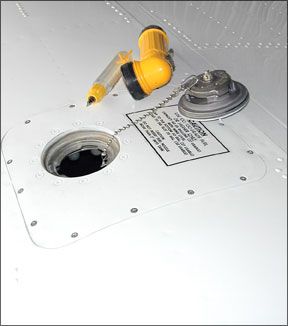 My wife and I have enjoyed using our Skyhawk to make trips to visit family and friends, including several trips from our home airport in Frederick, Md. (KFDK), to Lake City, Fla. (KLCQ), where my mother-in-law resides. On one of these trips, I was reminded how important it is to properly preflight the airplane, not rush the process, nor skip any items.

A trip from KFDK to KLCQ requires at least one stop, and depending on winds, weather and comfort, we have made the trip with two legs. This trip, the first leg took us nearly halfway; we got fuel, and had lunch. I seldom miss an opportunity to top off the tanks-having been schooled that fuel on the ground is of little use once airborne-and I look for opportunities to frequent FBOs at general aviation airports. After lunch, I left my wife to go preflight the airplane, thoroughly. And we departed for our next leg.

En route, I considered the possibility of proceeding all the way to KLCQ, but we would need to divert around some weather, making it a long trip. And much of the second leg was in IMC, increasing my workload. We opted to make one more stop, and take a quick break.

I asked for a top off, and checked the oil. As soon as the fueling was complete, I did the external preflight. Distinct in my memory was checking only a couple of fuel sumps on the left wing, without waiting for the fuel to “settle.” Our takeoff was uneventful as we hugged the Atlantic coast line, and then were vectored southwest, direct KLCQ. Another 45 minutes and we would be on the ground. The skies had cleared, so we had good visibility forward and below us.

About this time, the engine “coughed” a couple times, getting my attention! Nothing appeared amiss-engine indications were all good. I began planning what I might do if I lost the engine. For several minutes, all seemed to be going fine. Then it happened again-a couple of engine coughs. My wife said, “I heard that, and I heard it before.”

The engine kept running; KLCQ was still out of gliding distance, with no other field closer. The engine was running smoothly, again, so I continued on, always looking for places to put down.

The last 20 miles or so were tense, but uneventful, and we landed at KLCQ. After waiting half an hour, I began to sump the fuel and quickly discovered several ounces of water in one of the wing tanks. All I can presume is I had gotten contaminated fuel at my previous stop, and I must have been saved by agitation of the fuel, in-flight, that kept most of the water suspended.

Whatever the explanation, I was fortunate to have made it to my destination without a mishap or off-field landing. Now, I never rush the preflight, nor fail to wait after fueling, before checking all the sumps.