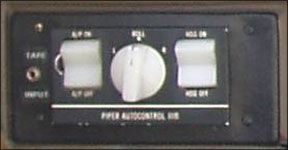 I was flying my 1976 Piper Arrow out of the Kendall-Tamiami Executive Airport south of Miami. It was a marginal VFR day in mid-December. Earlier, I had planned to make a local flight, but stay close to the airport in respect of the weather. Knowing the area and with weather capability on my GPS, I felt confident Id stay out of trouble.

I decided to stay in the pattern for a few touch-and-go landings with short approaches. After my third circuit I was turning left crosswind after departing one of the easterly runways. Wind was from the east at around 12 knots.

Climbing through about 700 feet, the plane rolled violently to the left, in excess of 45 degrees. I was able to level the wings with significant effort but knew something was seriously wrong. It felt as if I was driving a car after losing its power steering and wanting only to turn to the left.

I called the tower, requested clearance for an immediate landing and was granted such. They asked if I needed assistance-I told them I wasnt sure; lets see how this goes and mentioned I was having problems with the ailerons.

I did my pre-landing check, dropped the gear, put in 10 degrees of flaps, then 25. I made very shallow turns in the pattern, all the time fighting what felt like a lead weight on the left side of the plane.

Im sure the tower was looking at me with binoculars so I tried my best at a greaser given the circumstances. I happened to be successful although I was on the verge of having a heart attack!

I switched to ground control and again they asked me if I needed assistance. I said no, I can steer on the ground with my feet but my ailerons arent working right.

While taxiing, the yoke wanted to turn left all on its own, like some lead weight was pulling on it. When I parked and shut down, my controls returned to normal. I hadnt a clue what was going on.

After tying down, I climbed back into the airplane and looked at the autopilot controls, thinking they might have something to do with what happened. The roll-control knob was turned to the far left; however, the autopilot itself was switched off. After consulting with my mechanic, it was eventually determined that the autopilots main switch had failed, powering up the device.

Most of my flying involves short hops not requiring an autopilot. I didnt realize the roll control was not in the vertical position-it wasnt part of my normal checklist. It is now.

We have an aging fleet of G.A. airplanes out there-switches and other seemingly insignificant components are going to fail after a while.

Those of you with an autopilot may want to add to your pre-flight check ensuring the roll control knob is in the neutral position. If the main switch goes bad and the autopilot engages, its easier to fly a winged truck without power steering straight ahead than one constantly wanting to turn left or right! Or…just pull the circuit breaker.