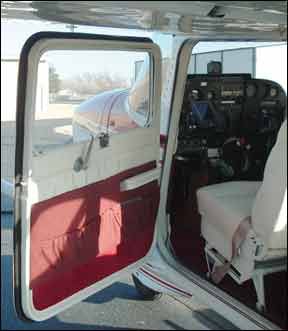 My earliest aviation-related learning experience came years before I earned my private certificate, or even soloed. I was a passenger in a Cessna 182 Skylane my father rented for a business trip to central Missouri. I dont remember all the details, but I was probably in elementary school, so it likely was during the summer. At the time, I was too young to see over the Skylanes seemingly massive instrument

We were droning along on the flight home, minding our own business, with my father flying from the left seat and me in the right, when a sudden rush of air and noise announced the pilots-side door had sprung open. This was a new experience for me since, up to now, I had never experienced any drama in a light airplane. That was about to change.

After slowing the airplane and re-trimming to hold our altitude, my father grabbed the door handle and tried several times to slam it shut with one hand while his other steadied the airplane. That didnt work too well, since he really needed to use both hands, twist in his seat and put some body English into the effort. Of course, the Skylane didnt have an autopilot, just me.

Over the rushing air, my father gently and calmly explained what he needed to do and that I needed to “fly the airplane” while he closed the door. Since my feet wouldnt even reach the floor, he slid my seat far enough forward that I could grab my yoke and at least hold onto something presenting the semblance of controlling the airplane. He loosened his seat belt, twisted so he could grab the door with both hands and leaned out far enough to get some momentum. It didnt latch the first time, but did the second. All was quieter again and my first foray into serving as pilot-in-command ended.

My fathers calm and gentle demeanor during this event is something thats stuck with me throughout my training and flying. It was a good first lesson in how to handle the unexpected, even when you dont have much to work with.