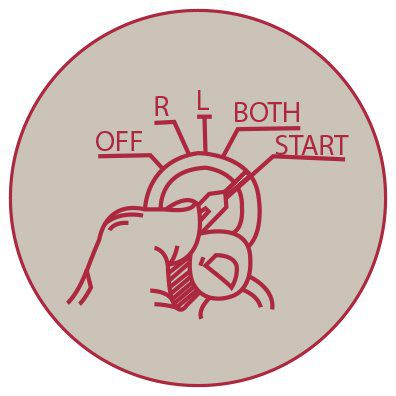 My background as a crewmember aboard military aircraft gave me a strong appreciation for practicing emergencies. Thirty-two years after earning my private certificate, I had my first one. The early September evening started out like most other cross-country flights my wife and I had taken in the 18 months since we bought our Piper Archer II. Our plan was to take off around 1600 local, get a good night’s sleep at our destination, then I was to take my instrument-rating checkride the next morning.

After the run-up checklist was complete, we took off and at 700 feet AGL, I turned off the electric fuel pump and leaned the engine a bit. In response, power suddenly dropped off and the engine began running rough. What? Really? Are we really facing an engine-out emergency on takeoff? Is this where we put down or turn back to the airport?

I immediately started emergency procedures: Fly the airplane (nose down to maintain airspeed). Mixture: Full rich. Fly straight. Look for a place to land straight ahead or to the side. That highway has too much traffic. Lots of fields around, but they’re embedded with housing subdivisions. Fuel pump: On. By now, we are now making about 75-percent power, but still running rough. No smoke or oil seems to be leaking.

A very gentle turn back toward the airport. Holding altitude now, so I join the downwind at around 800 feet AGL and stay close to the airport for a close-in base and final. Engine still running. At this point, we seem to have enough power for a safe pattern landing, but I am thinking, “If the engine quits completely, I will just slip down to the runway and land.” We were able to make a nice, short base leg and land into the wind.

Clear of the runway, I ran through the run-up checklist with the electric fuel pump on. On the left magneto, the engine runs super rough and almost shuts down. On the right mag, the engine runs normally. When I repeat the mag checks with the electric fuel pump off, the engine dies on the left magneto. The next stop is the hangar, where I put the plane to bed. I call the DPE and reschedule my instrument checkride to the following week.

Driving home, my wife and I talked more about this event. One question she asked was why I didn’t follow her suggestion to call Mayday on the CTAF. But who would have heard us? There were no planes flying in the pattern at the time.

I tried to justify my reasoning for not calling Mayday because we had restored some engine power and I felt we could safely fly a close-in pattern back to a normal landing. I was right, but I had just sat through a WINGS seminar where the presenter talked about calling Mayday at least three times a year for lesser emergencies than we had just experienced. Today, I agree we should have made some kind of radio call.

My final thought on the way home? “I need a beer.”