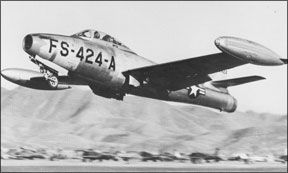 There are many stories about pilots loading jet fuel in a piston-engine aircraft, but using aviation gasoline in a jet engine is less dramatic. I had departed an air base in northern Japan on a cold January day, en route to a base in southern Japan, flying an F-84 fighter jet shortly after the end of the Korean War.

During the flight at about 25,000 feet, I noticed the left tip tank was not feeding its main fuel tank. After landing at an emergency base in central Japan, the aircraft was refueled with 100-115 octane aviation gasoline, the only fuel available. While

climbing out, I noticed the fuel was burning faster and at a higher engine temperature.

The destination had a 100-foot ceiling and one mile visibility. Because of the rapid fuel burn, a diversion was out of the question. I made three ground-controlled radar approaches without seeing the runway because the controller kept losing me in clutter.

On the last approach, I declared an emergency. I broke out at 50 feet AGL and about 50 feet left of the runway, and managed to land. After touchdown, I saw another F-84 coming at me from the opposite direction. Both the other pilot and I managed to swerve enough to avoid collision. It appeared that we missed colliding by a few feet. As I approached the refueling area, the engine flamed out from lack of fuel.

As it turned out, the other pilot had taken off for a local test flight but found that the tip tanks would not feed. He declared an emergency, and was cleared to land on the runway from the opposite direction by the control tower. Apparently, the tower had not coordinated traffic information with the radar controller and did not know about me.

The lessons learned are many. Among them: Carefully check the fuel supply for water. A fuel line to the air bases main tank had a leak, allowing melted snow to seep into the fuel, causing a frozen fuel valve in the tip tank.