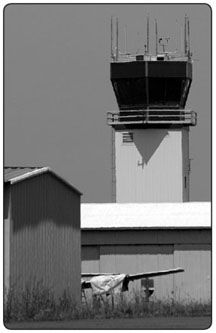 After an IFR flight of nearly four hours from our home base on the East Coast, my wife and I approached our destination. Under the overcast, where the visibility was excellent, we canceled IFR and soon reported the field in sight. We were advised to enter a left downwind for the east-west runway; I was flying our Mooney while my wife was handling the navigation and communication duties.

The tower was busy with three inbounds from the southeast, at least two singles and a twin in the pattern, plus us, inbound from the east.

Soon, we were advised to enter the left downwind for the northeast/southwest runway and the tower sequenced us to follow the second single, now on left base. With no sun, it was easy for us to pick out the two singles in the left-hand pattern and the twin on right downwind. We maneuvered to the base leg with our traffic preparing to turn base-to-final and the first single on short final. The twin was still on the right downwind.

As we turned final, the twin was still on base and much too close to sequence to final behind us. As soon as we were established on final, we were looking frantically for the twin, but without contact. Suddenly the windscreen was nearly filled with the underside of the twin passing perhaps 30 to 50 feet above us, descending for the runway.

At this point the tower realized the conflict and instructed us to offset to the right and go around. We had witnessed our first near-miss and we were part of it.

An instructor and student were executing a simulated engine-out procedure and, by the instructors account, were maintaining a higher than normal approach path. Clearly, the twins occupants were preoccupied with their workload and not aware of their sequence. The instructor confessed that he had mistaken the single on short final (a PA-28) for the Mooney.

There were three principal mistakes made in this situation: 1) the tower did not properly sequence the twin on right downwind and the Mooney on left base; 2) the twin did not have the Mooney in sight even though contact was acknowledged; and 3) we did not tell the tower we had lost contact with the twin.

After the usual round of apologies and excuses from the pair in the twin and from the tower the question became: How could this near-miss have been prevented? Several ways! The tower could have sequenced us on downwind as originally set up rather than instructing us to follow the single on base. This would have put us behind the twin, which would be appropriate since the twin was practicing an emergency maneuver. The tower could have instructed the twin to extend its downwind, but this would have disrupted the twins engine-out maneuver. We could have taken evasive action sooner based on the twins position.

In the future this Mooney driver will be more assertive and more likely to act on his own visual assessment rather than allowing himself to be reassured by ATC communications or acknowledgments from other aircraft, neither of which had the better view of the situation in this instance.