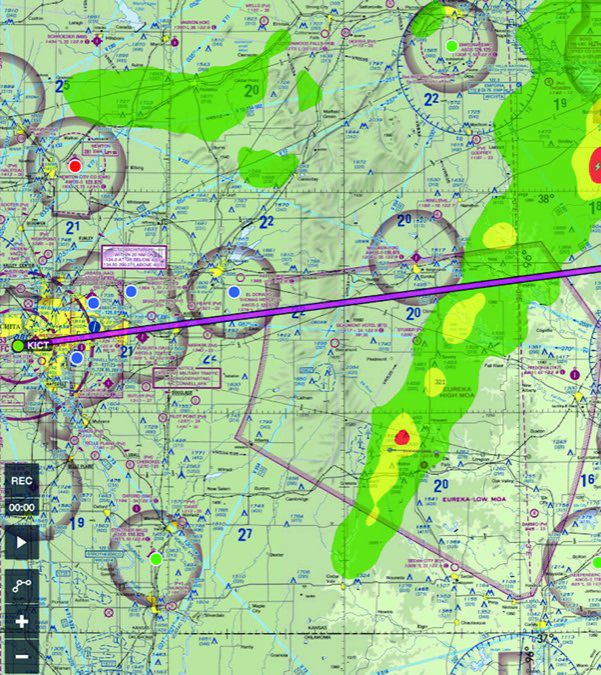 It was a dark and stormy day…seriously. Family issues required me to get to Clark Regional Airport (KJVY) in Jeffersonville, Ind. But the prognoses for the route from Augusta Municipal Airport (3AU) outside of Wichita, Kan., predicted lines of storms scattered across the 600-odd miles.

The storms were also forecast to be widely scattered with no overcast. Instrument current and confident in my ability to see and avoid the boomers, my Comanche and I launched for the four-hour flight at about 10 a.m. Central time.

Through eastern Kansas and across all of Missouri, the decision seemed sound. In and out of some clouds, with clear air between, the nasty stuff showed up easily against the green landscape of late spring. The fine folks at ATC quickly and repeatedly granted my requests to vector around the harsh stuff.

A nice tailwind promised a shorter trip than planned and as I crossed the Mississippi, a larger, longer storm came into view. With its south end near Evansville, Ind., and stretching to beyond Columbus, Ind., the storm line was visible and nicely defined.

Upon my request to deviate 60 miles north to clear that end of the storm, an Evansville Approach controller advised me that a 20-degree turn toward the south would send me through a soft spot and back on my way more quickly.

After the 20-degree course change, we plunged into soft clouds—soft for about two minutes. Thens Level 3 weather erupted all around us. Lighting in all quadrants and the VSI alternating between 4000 fpm up and violently reversing to 2000 fpm down made me think of a cork in a clothes washer.

The controller lacked weather radar; his surveillance radar showed no lightning, no build-ups, just the defined edges of the storm. So, for 22 minutes the Comanche and I rode a furious piece of weather—now up to Level 4.

Fortunately for me, a Mooney with radar, coming out of KJVY and headed for Evansville Regional Airport (KEVV), relayed the position of a soft spot in the back side of the storm. Ready for the rodeo to end, I once again followed the controller’s input—warily. This time it worked. The clouds got darker, lightning still flashed, but five minutes later we popped into the clear.

My takeaway that day: Trust your own eyes—even against the seasoned observations of a veteran controller.