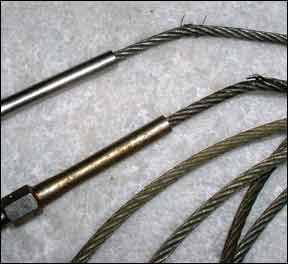 The bulkhead (p/n 0450046-5) was installed in 2007 at 1476.4 flight hours and has been inspected each 100 hours since. At the latest inspection, a crack was discovered at the base of the propeller hub; after removing the hub, severe cracking was found, comprising 85 percent of the distance around the center of the bulkhead. Mandatory propeller removal should take place at least every 200 hours of operation for a more thorough inspection of the bulkhead.
Part Total Time: 1476.4 hours

While in cruise flight, instruments showed low oil pressure and higher-than-normal temperature. The engine oil cooler vernatherm (p/n 723655) had started to come apart due to the failure of an internal snap ring. This caused a restriction of the engine oil cooling system, resulting in the abnormal readings.
Part Total Time: (unknown)

The left and right extension cables were removed from both inboard flap bell cranks to inspect for wear and damage per type-club recommendations. Significant broken wire strands/bundles were found. Undetected, these would have led to eventual failure. These should be removed and inspected on a 500-hour minimum basis as this is becoming an issue on Skymasters fleet-wide. These cables must be removed from the bell crank for proper inspection.
Part Total Time: 3795.4 hours

Dye-penetrant inspection revealed a small crack beginning to form on the trunnion, just below the bushing area along a casting ridge. This is the r/h aft MLG trunnion (p/n 40288000). The aft trunnion (l/h side) is identical and is not cracked. The forward trunnions (different p/n) were found not to be cracked. It is assumed these parts are original equipment.
Part Total Time: (unknown)

Upon inspection, a hole was found in the top of the cylinder adjacent to the spark plug. The cylinder was replaced and the aircraft flew 25 more hours when the pilot complained of a bad smell in the cockpit. A compression check noted numerous compression leaks from five remaining cylinders. This engine had been overhauled at 441 hours total hours; new cylinders had 404 hours on number three and 429 hours on the five remaining cylinders. ECI is replacing all cylinders.
Part Total Time: 404.0 hours