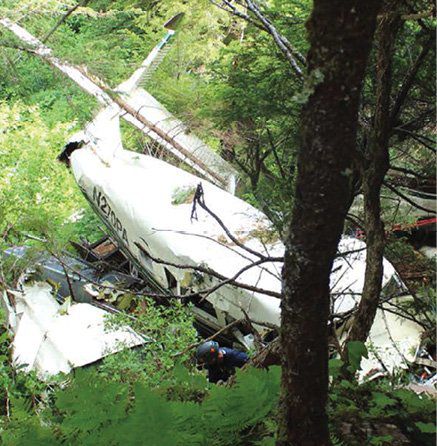 When I was a student pilot, I was lucky to have some grizzled mentors. There were a lot of “do this” and “don’t do that” admonitions, a lot of tips regarding shortcuts and rules of thumb, plus some sage advice about decision-making. A lot of that advice could be broken down into the old “It’s better to be on the ground wishing you in the air than to be in the air wishing you were on the ground” genre, but it was often accompanied by a “Let me tell you what I learned the hard way” kind of introduction.

Later, as I gained experience, other pilots began treating me more as a peer than someone who needed additional knowledge. Looking back, it’s obvious the methodology changed: Once I became something of a peer to other pilots, the questions I might be asked about a planned flight became more detailed and focused on the consequences of my decisions and actions.

Often, the peer’s objective was to get me to think about what my preflight planning was telling me and how that would translate into in-flight conditions. The airplane’s capabilities and equipment were a part of the discussions, as were terrain, time of day, loading, fuel and endurance and, of course, weather. We also talked about how I would be faring, perhaps after a long work day, and my ability/willingness to, say, shoot an ILS to minimums. Alternatives also were always a topic, including the time-honored 180-degree turn.

As a result of those interactions, I canceled a few flights over the years, and a few more on my own. Here’s an example of when a more skeptical and less-trusting pilot-peer’s input regarding actual conditions might have saved the day.

On February 25, 2017, at about 2040 Mountain time, a Cessna 172H Skyhawk was substantially damaged during impact with terrain while maneuvering at a low altitude about 11 nm north-northwest of Panguitch, Utah. The non-instrument-rated private pilot and two passengers were fatally injured. Dark night instrument conditions prevailed.

The flight departed Page, Ariz., about 1930, with Salt Lake City, Utah, as its destination. The direct route between the two points is 223 nm and includes terrain in excess of 11,000 feet. Minimum en route IFR altitudes along plausible airways are as high as 14,000 feet.

Before taking off, a pilot-rated friend of the family texted back and forth with the accident pilot, discussing VFR route options. Weather was also discussed, with the friend telling the pilot the clouds to the east of his house “are all low.” At 1923, the friend informed the pilot, “My radar app shows weather over Tropic, but light and some over by Beaver. Nothing bad.” At 1924, the pilot replied, “That’s what I’m seeing too. I’m just going to stay over the highways.” That was the last communication the friend received from the pilot. Earlier, the FBO at Page had topped off both fuel tanks.

When the pilot failed to arrive at his destination that evening, local authorities were contacted. The FAA subsequently issued an alert notification at 0509 on February 26, and search and rescue operations were initiated.

Recorded radar data identified the airplane departing at about 1939. The flight proceeded northwest and climbed to cruise between 9100 and 9900 feet msl. The last radar return occurred an hour later, at 2038:38, about 80 nm northwest of the departure airport at 9600 feet msl. At about 1100 on February 27, the wreckage was located.

Examination revealed the airplane had impacted snow-covered mountainous terrain at about 7358 feet msl in a nose-low attitude and on a southwesterly heading. All necessary components for flight were accounted for at the accident site. There was no evidence of a post-crash fire. The cabin and cockpit areas were destroyed during the accident sequence. Examination of the airframe and engine did not reveal any mechanical anomalies that would have precluded normal operation.

The surface analysis chart depicted a stationary front located across central Arizona with a high-pressure system over northern Utah. The accident site was located north of the front in an area with a weak pressure gradient. Light north and west winds with variable cloud conditions were being reported, with a station northwest of the accident site reporting light continuous snow.

Weather radar revealed snow showers over the accident site, and infrared satellite imagery depicted stratiform clouds over it with bases estimated at 8700 feet msl and tops near 14,000 feet. The Salt Lake City ARTCC’s Center Weather Service Unit had issued a statement applicable to the accident area that indicated widespread MVFR/IFR conditions in snow with low ceilings and visibility.

An automated observation taken 22 minutes after the accident and about 12 nm south-southeast of the accident site at an elevation of 6763 feet msl included wind from 040 degrees at three knots, visibility of 10 sm, few clouds at 3900 feet agl and an overcast at 4800 feet agl. Temperature was minus three degrees C; the dew point was minus six C. At the time of the accident, the moon was more than 15 degrees below the horizon and provided no illumination. The investigation found no evidence that the pilot had received a weather briefing before takeoff.

The NTSB determined the probable cause(s) of this accident to include: “The pilot’s continued visual flight rules flight into instrument meteorological conditions, which resulted in controlled flight into terrain. Contributing to the accident were the pilot’s inadequate preflight weather planning and his poor decision-making.” According to the NTSB, “The changes in heading and altitude between the end of the radar data and the impact suggest that the pilot began maneuvering the airplane after radar contact was lost.”

The accident pilot had a friend reaching out to him, but neither was taking seriously the weather or dark night conditions. Discussing certain issues—perhaps including what the accident pilot’s (nonexistent) weather briefing contained and the limitations of a loaded 145-hp airplane over mountainous terrain—might not have saved the day. But minimizing the flight’s risks wasn’t the best input the pilot could have received from a peer.

The NTSB on Avoiding CFIT

An NTSB Safety Alert (SA-013, “Controlled Flight Into Terrain in Visual Conditions”) from 2008 offers several tips for avoiding CFIT at night, which we’ve summarized below:

• Terrain familiarization is critical to safe visual operations at night. Use sectional charts to ensure your altitude will safely clear terrain.

• When planning a nighttime VFR flight, follow IFR practices such as climbing on a known safe course until well above surrounding terrain and choose a cruising altitude ensuring terrain separation.

• When receiving radar services, do not depend on ATC to warn you of terrain hazards, since they may not always be able to recognize that a particular VFR aircraft is dangerously close to terrain.

• When issued a heading and instructed to “maintain VFR,” be aware that the heading may not ensure terrain clearance.

• ATC’s radar software is configured to protect IFR flights and is normally suppressed for VFR aircraft.