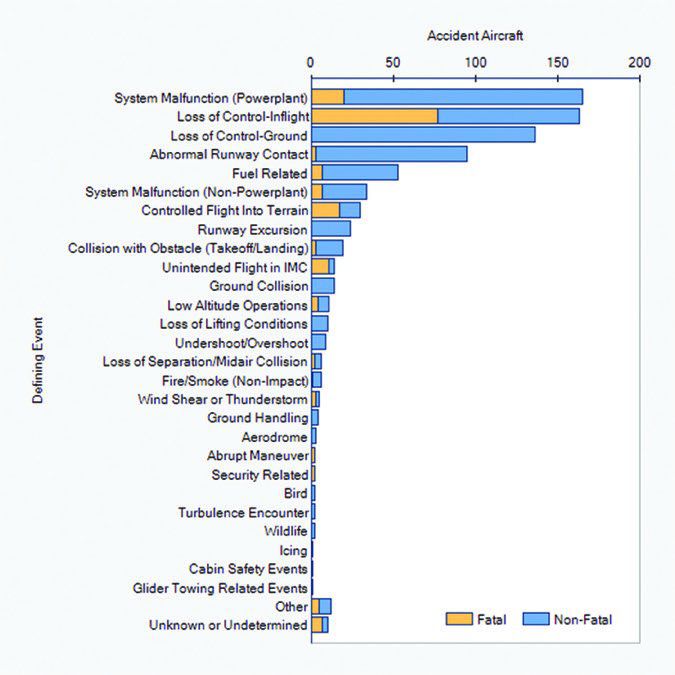 At about 1105 Pacific time, the airplane departed the runway after landing. The flight instructor and student pilot were not injured but the airplane sustained substantial damage to its left wing. Visual conditions prevailed.

According to the flight instructor, they were practicing single-engine approaches by simulating failure of the left engine. The airplane was low on the approach, and the student was instructed to add power to the right engine. The student advanced the right engine’s throttle, but there was no increase in power/thrust. The flight instructor told the student to push both throttles full forward and make a go-around. The right engine returned to full power but the left one failed to produce thrust. The airplane entered a VMCroll toward the “failed” left engine and impacted terrain.

The airplane overran the end of the runway at about 1924 Eastern time during a landing. The two airline transport pilots and the two passengers were not injured; the airplane sustained substantial damage. Instrument conditions prevailed for the Part 135 on-demand air taxi flight, which operated on an IFR flight plan.

The pilots abandoned their first approach due to wind conditions and ATC vectors. They then conducted a straight-in approach to Runway 24R and landed in the touchdown zone. They applied maximum braking but the airplane did not slow down and skidded off the runway into the engineered material arresting system. An initial damage assessment of the airplane indicated substantial damage to the fuselage and a collapsed nose gear.

At 1900, observed weather included wind from 330 degrees at 15 knots, gusting to 25 knots, four miles of visibility in mist and an overcast at 700 feet.

At 1125 Eastern time, the airplane was substantially damaged when it collided with terrain after a loss of engine power during the initial climb after takeoff. The private pilot—who was also the airplane’s owner/builder—was fatally injured. Visual conditions prevailed.

According to a witness, the flight’s purpose was to test the engine, with which the pilot/owner had been having problems. When the airplane was about halfway down the 4000-foot-long runway on takeoff, he heard the engine lose power. According to the witness, the airplane was about 100 feet above the runway when the pilot made an “aggressive bank” to the left. The airplane stalled and descended straight down to the ground. The airplane came to rest upright in a nose-down attitude about 250 yards north of the airport. There was no post-impact fire.

The airplane was substantially damaged at about 1715 Central time during a forced landing following loss of power from both engines. The pilot, pilot-rated passenger and another passenger were not injured. A third passenger sustained serious injuries. Visual conditions prevailed.

According to the pilot, the fuel gauges indicated about 45 gallons “a side” during the preflight inspection. After a 30-minute flight to pick up passengers, the airplane proceeded out over the Gulf of Mexico to photograph an oil rig. The rear door had been removed for the mission, limiting airspeed to 130 KIAS. Fuel gauges indicated about 40 gallons per tank before the second takeoff.

A passenger’s GPS tracking application reported that the accident flight departed at 1347 and arrived at the oil rig at 1514. Photography was completed at 1607, and the pilot turned toward the departure airport. According to the passenger, the pilot decided to divert to a closer airport at about 1628. The first engine lost power at about 1708, followed by the second one about 1715. The pilot executed a forced landing to a canal. Recovery personnel did not observe a fuel sheen on the water. No fuel was observed in the tanks.

At about 0654 Pacific time, the airplane impacted an industrial storage facility. The pilot/owner, one passenger and a family dog were fatally injured; another family dog was not injured. The airplane was substantially damaged. Instrument conditions prevailed. The preliminary NTSB report fails to note whether the private pilot was instrument-rated.

The flight departed at about 0645, before the control tower opened. Witnesses reported low-level fog. The accident flight also was captured on video, which showed the airplane make a turn back toward the departure airport. The airplane was flying in and out of fog before it entered a spin and dropped below the rooftops of several buildings. Witnesses reported the airplane was in a nose-high attitude when it turned back, with its wings rocking back and forth, before it started to spin and impact the ground.

The airplane was involved in a runway excursion when its landing gear collapsed at about 1800 Central time while landing. The pilot and passenger were uninjured. The airplane sustained substantial wing damage when it contacted a runway sign. Visual conditions prevailed.

After the pilot landed and boarded a passenger, the airplane would not start. The pilot used a ground power unit to start the engine and ran the airplane for about 10 minutes to charge the battery and verify the charging system. The pilot then taxied to the runway but did not verify ammeter output during the run-up. After departure, all the radios were inoperative. The pilot re-entered the traffic pattern and received a green light from the tower.

Without electrical power to lower the landing gear, the pilot initiated the manual gear extension procedure but was unable to remove the handle’s cover plate. After bending the cover back, he performed the manual gear extension procedure and observed the wingtip mirrors indicate the gear appeared to be down. On touching down, the landing gear collapsed and the airplane slid off the runway, impacted the sign.

At about 1059 Pacific time, the airplane collided with the ground while maneuvering. The private pilot and three passengers were fatally injured. The airplane’s fuselage and all flight control surfaces were damaged. Visual conditions prevailed.

A witness observed the airplane flying straight and level at between 2000 and 3000 feet agl. As it got closer to the mountains, it appeared “the wind had pushed the right wing up.” The airplane pitched down into a near-vertical attitude. The witness heard its engine power increase when the right wing lifted. The airplane impacted terrain adjacent to a series of power transmission lines.

The airplane was destroyed when it impacted terrain at about 1913 Pacific time. The private pilot sustained fatal injuries. Night visual conditions prevailed.

Radar and voice communications indicate the airplane began a descent from its cruise altitude of 4300 feet msl at about 1907. It continued descending at between 300 and 600 fpm until impact. At about 1910, the pilot reported 14 miles south of the destination airport. Controllers requested a radio report at three miles out, but there were no further communications. The last recorded radar position was nine miles south of the airport at 1975 feet msl and a groundspeed of 146 knots. The accident site was located on the north face of a densely forested mountain with no lighted structures. The debris field was about 1200 feet long.

At about 1505 Mountain time, the airplane impacted terrain while conducting an instrument approach. The pilot and passenger were fatally injured, and the airplane was substantially damaged. Instrument conditions existed at the destination airport; the flight operated on an IFR flight plan.

The pilot was conducting the ILS approach to Runway 23. During the approach, the airplane turned left about 180 degrees, followed by a right turn, before disappearing from radar. A post-impact fire consumed large portions of the fuselage and wings. At 1453, weather observed at the destination airport included wind from 340 degrees at 13 knots, -mile visibility in snow and freezing fog, vertical visibility of 800 feet, with the temperature and dewpoint both -27 degrees F.

The airplane collided with the ground at about 1130 Pacific time. The commercial pilot was fatally injured; the airplane was destroyed. Visual conditions prevailed.

Preliminary radar data revealed a primary target, consistent with the accident airplane, traveling northeast over a mountain range at between 14,100 and 14,500 feet msl. The target proceeded until it was northwest of the accident site, then made a wide right turn toward the nearby destination. Shortly afterward, the airplane’s track continued south and appeared to enter a descending spiral.

The airplane impacted the ground in an inverted, wings-level, slightly nose-down attitude. The nose cone assembly, empennage, right wing outboard full-span-flap assembly and left outboard wing section were not with the main wreckage. A debris field about mile south of the main wreckage included the separated airplane parts.

Satellite imagery 30 minutes prior to the accident revealed extensive cloud cover but significant breaks in clouds where the ground could be seen.

At about 1615 Central time, the airplane was destroyed when it impacted terrain while attempting to return to the departure airport. The commercial pilot was fatally injured. Visual conditions prevailed for the local maintenance test flight.

On an earlier flight, the airplane’s owner observed the engine was not producing full power. He declared an emergency, turned back to the airport and landed uneventfully. After reporting the problem to his maintenance technician, the mechanic boarded the airplane, started the engine and performed a run-up, the results of which were normal. The mechanic asked the owner multiple times to join him on a test flight, but the owner declined and watched as the mechanic departed.

The airplane made a left turn and entered the downwind at a normal altitude. The owner then observed the airplane descend on the downwind leg and turn left base before it disappeared behind a treeline. A few moments later, the owner saw a plume of smoke and rushed to the accident site, where he observed the airplane engulfed in flames. Examination established valve train continuity for all but the No. 4 cylinder, which was determined to have a seized exhaust valve.

The airplane impacted terrain at 1939 Eastern time following a loss of control. The airline transport rated-pilot and two passengers were fatally injured; the airplane was destroyed. Night instrument conditions prevailed; an IFR flight plan had been filed.

Shortly after takeoff, the pilot deviated from the assigned heading and altitude. When questioned by ATC, the pilot replied that he had a trim problem and difficulty controlling the airplane. After reporting he had the airplane back to straight and level, the pilot was eventually cleared to FL230. The pilot subsequently told ATC he needed a minute to get control of the airplane and that he was having difficulty with the trim. Communication and radar contact were then lost. Several witnesses reported the airplane as being very loud and that its engine sound was steady until impact.