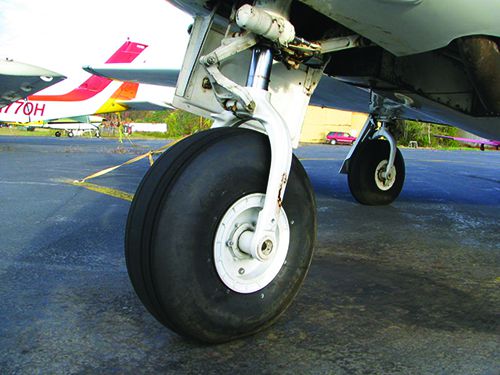 The nose landing gear strut debonded at the nose fork bearing spindle. Spindle and strut are bonded via a hot-bond agent while in an autoclave. Suspect debonding occurred due to unreported hard landings and extreme stress due to improper ground handling.

During routine inspection, the nose gear oleo strut was disassembled for O-ring replacement. The inner strut tube (p/n 07436311) was found to have damaged retaining pins, allowing lower part of the tube to work loose from its upper part. The only way to find this type of damage is to completely disassemble the nose strut.

During engine and engine mount change, the air/oil separator breather tube was removed from the firewall. The breather tube had been routed so that it was touching the starboard side of the lower nose gear casting, causing wear. The manufacturer considered this part to be unserviceable, and it was removed and replaced. Suggest breather tube be relocated to facilitate inspection.

On retracting landing gear after routine takeoff, a loud bang was heard. The airplane was landed without incident. The nose strut had deflated during taxi as the preflight inspection determined strut to be properly inflated. As a result of the deflated strut, the nose gear entered the wheel well improperly and caused damage.

The left main landing gear strut failed during the takeoff roll, resulting in the gear collapsing. Inspection revealed an existing crack starting from the bolt hole that attaches the strut to the wheel housing. This aircraft is used for flight training and probably has experienced hard landings on many occasions.