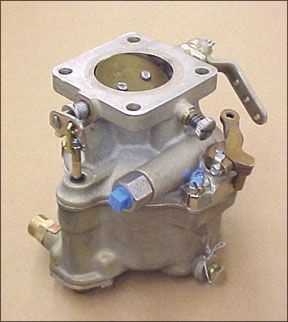 A pilot reported total loss of elevator control on final approach. Investigation revealed the rear control stick was no longer connected to the elevator push rod. The aft belly pan was removed and a loose bolt and washer were found. The nut

was not found. The other rod ends were inspected for safety; the self-locking nut and bolt for the aft interconnect push rod was very loose. The existing hardware was not reinstalled because it was found loose during the inspection. New hardware was installed for each noted discrepancy. The owner was advised to have a factory service center inspect the aircraft, and make repairs according to the maintenance manual and parts book.

The probable cause for the loose hardware could be from the reuse of the hardware or incorrect torque applied to the nuts and bolts. Castellated nuts and cotter pins were installed in place of self-locking nuts.

During an annual inspection, several control cables were found corroded as a result of being submerged in water collected in the aircrafts belly of the aircraft. These control cables will be removed and replaced, the water dried up, and possible leak areas inspected and corrected as needed. Also found were seized control cable pulleys: the l/h elevator pulleys aft of the aft spar, the aileron pulleys forward of the forward spar and the elevator pulleys in the tailcone. These pulleys will be removed and replaced.

On shutdown, (this aircrafts engine) rpm increased 400 rpm. At idle, the engine would run at 600 rpm, drop to 300, then die. Upon opening the carburetor one-half of the white plastic float was found 80 per cent full of fuel-it did not leak out over night. Precision Airmotive carburetor, p/n LW 15986-85; float p/n 30-804.

The pilot experienced a noticeable popping sound in the engine compartment, followed by roughness. The engine oil pressure started to deteriorate and the pilot elected to shut down the engine, stopping the propeller from turning by putting the aircraft (Cessna 172N) in a nose-high attitude. He glided to a major airport and successfully dead-sticked without accident. Investigation showed the number one cylinder head had separated from the barrel. This ECI Titan Cerminil (p/n AEL 65102) cylinder was installed 206 hours earlier when the engine was overhauled.