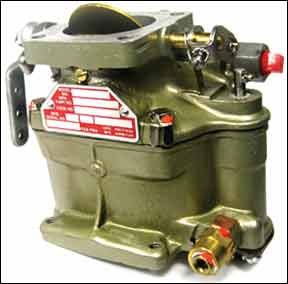 The landing gear actuator (p/n 95-810017-23) and motor assembly was removed and replaced with an overhauled unit. While rigging and when gear was extended,

the actuator and motor made a slow, deep, grinding noise.

Upon inspection, a washer (p/n 105090cr032-4e) was missing. Further investigation revealed the washer was misplaced between the gear actuator housing and spur and pinion gear. The maintenance manual narrative omits installing the washer, though the illustrated parts catalog depicts the washers installation correctly.

The crew made a precautionary landing after they were unable to retard the engine throttle below 2100 rpm. In order to land, the mixture was moved to the idle cutoff position prior to the landing flare. Upon inspection, the accelerator pump discharge tube was found detached from the boss, becoming lodged between the throttle plate and the carburetor throat and inhibiting throttle movement.

This carburetor was shipped with an overhauled engine, directly from the manufacturer.

A worn camshaft (p/n 655384) was discovered while changing a cylinder due to low compression. Affected were intake lobes for cylinders #3 and #4. New valve lifters were installed with the new camshaft. Submitter states this is a recurring problem stemming from the manufacturing process.

When the shaft failed it damaged the shaft oil seal and allowed oil to exit the engine. Only some five quarts of oil remained in the 12-quart engine. The pilot reported oil pressure and temps were in the normal range prior to landing.