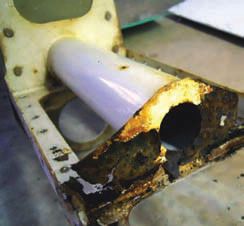 A casting crack was found visually during the course of an annual inspection. The crack is located on the forward end of the support casting (p/n 07416031), starting 0.25 inches from the outboard mount holes and ends within 0.25 inches of the mount holes on the inboard side of the casting.

This Hawaii-based aircraft’s rudder torque tube (p/n 263066-3) was scheduled for replacement due to elongated holes in the bell crank. Once the rudder and skin were removed, severe corrosion was found on the upper part of the torque tube in an area not visible during any scheduled maintenance. The corrosion had reached the stage of “blistered rust” and the “L” angle on one side was easily separated with minor force. By design, the rudder is not sealed on the top. The submitter suggests a rudder inspection hole be engineered so maintenance can easily inspect the torque tube for corrosion.

During an annual inspection, both the l/h and r/h lower support aileron pulley brackets (p/n: 67550000) were found to be cracked in the forward inboard radius mount flange at each wing rib. A piece of one of these pulley brackets was detached.

The alternator field circuit breaker tripped intermittently over the previous 25 flight hours, causing various instances of radio noise. The alternator (p/n 99105923) remained functional. Upon replacing the original alternator, it was disassembled and the ground brush found to be 0.375 inches long. The field brush was completely disintegrated, with the spring contacting the slip ring. This alternator is only available from the manufacturer. There are no known third-party overhaul facilities.